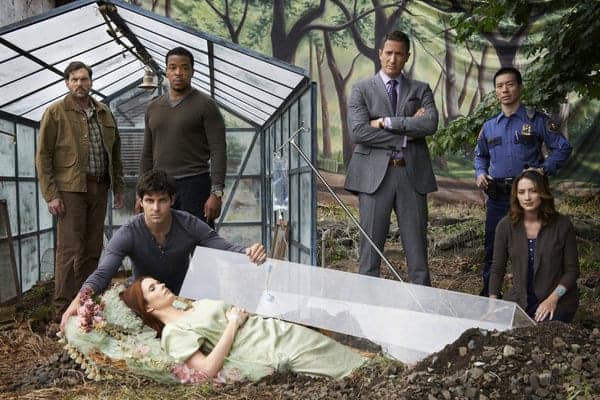 NBC became the first out of the gate with a fall show last night, brining back GRIMM for a second season. Yes, it’ll be weeks before any other networks throw their hats into the ring, almost a month until the first big wave of premieres, and one has to wonder if this experiment will work. Then again, with an odd show like GRIMM, it’s worth trying something bold.

GRIMM began season one as a police procedural that happened to have supernatural elements tossed in. Boring and sticking to formula, it delivered the kind of fare that clutters the airwaves. Then, late in the season, a remarkable thing happened. It became all about the mythology, some weeks not even having cases, and it tied together early events and characters from the beginning of the season, raising the whole endeavor up a notch. This may doom it to cult status, but it makes the series worth watching.

Season one ended on a cliffhanger, and season two’s first episode, “Bad Teeth,” picks up right where it left off. A little before, in fact, as viewers relive the climatic fight scene between Nick (David Giuntoli) and Kimura (Brian Tee, Crash), only this time from the perspective of Kelly Burkhardt (Mary Elizabeth Mastrantonio, Law & Order: Criminal Intent), who is skulking around the fringe. Viewers already know how this showdown ends, with Kelly subduing Kimura and revealing to Nick that she’s his long-thought-dead mother.

This changes the dynamics of the show immediately. Nick digests the information that she’s alive quickly enough, and seems to be glad to have her back, even if he’s a little annoyed she stayed away all these years. Of course, himself keeping secrets from his own loved ones to protect them, Nick can’t be too judgmental. He seems to accept her explanations at face value, and looks to already be counting on her help on a regular basis.

Kelly likely has other ideas. It’s incredibly difficult to trust her. It isn’t just that she hates Nick’s lovable friends, Monroe (Silas Weir Mitchell) and Rosalee (Bree Turner, promoted to series regular), who happen to be Wesen, or fairy tale-esque creatures. It’s the way that she guards herself and averts her eyes. There is just something sinister about her and the way she carries herself, and she definitely has ulterior motives for showing up now, not just coming for a family reunion. Nick trusts her too much, telling her about the coins and the key, relics that can be very powerful, and she is likely to abscond with something valuable, hurting Nick.

Nick doesn’t need to be hurt anymore. He’s has a very rough go of things, with conspiracies he doesn’t know about yet closing in around him. One involves his girlfriend, Juliette (Bitsie Tulloch) who is in a coma, rapidly losing her memories, a final revenge act by Adalind (Claire Coffee) before she fled. But while Monroe and Rosalee work on behalf of a cure for Juliette, so, too, does Adalind’s mother, Catherine (Jessica Tuck, True Blood), at the behest of Captain Renard (Sasha Roiz).

Why does Renard want to keep Nick around and under his command? The mysteries surrounding Nick’s boss have been varied and confusing. Season one teases his involvement in larger plots, including the “families” we keep hearing about. But we’ve yet to see what motivates him, or what his plans are. It’s nice that they don’t involve hurting Nick, and he hasn’t really done anything against Nick, anyway. But are his intentions benevolent or is he just using Nick? It’s time for a little more revelation on this front.

There are also new characters introduced in the very busy “Bad Teeth.” James Frain (The Cape, True Blood, The Tudors) is up to no good, as only he can be. A Mauvais Dentes creature (Eddie Davenport) is trying to kill Nick. Kimura may be dead before episode’s end, but Nick has no shortage of foes left to face.

Which is why it’s hard to rate “Bad Teeth” as an episode. As much as last spring’s finale only felt like half a story, with no closure of any kind, so, too, does this episode feel very transitional. It ends on another cliffhanger, Nick’s life in mortal peril. Is this the way GRIMM is going to be now? Never finishing a story, just continuing bits and pieces of larger arcs? I won’t necessarily complain too loudly if this is the case, but it would be nice to have a little more movement on the mysteries.

Lastly, there’s Hank (Russell Hornsby), who is losing it mentally. Having seen Monroe as a Wesen, and getting other clues about the supernatural world, Hank thinks he is going insane. Nick doesn’t confirm anything to “protect” his friend. But the time for protection is over. Hank might be able to handle the situation if Nick fills him in. Right now, he’s just on edge, and on the path to do something reckless, screwing up his life. Shooting at a creaking door is not something a stable person does. Nick has to tell him the truth before it’s too late.

At first, it looks like Hank and Juliette are being let in on the secret, but for a series like GRIMM, that would be too many main characters clued in too quickly. These matters must be stretched out to build tension. Juliette is forgetting what she knows, so she’s basically being reset. Which leaves room for Hank to be the newest member of Nick’s gang.

GRIMM is walking a delicate tight rope here. It reached a level of enjoyability late last season that was amazing. But the messy events of the finale and premiere aren’t quite at the level of slightly earlier episodes, even if they contain some fantastic action sequences. The mythology is building, setting itself up for comparison to king of this world, Buffy the Vampire Slayer. But while GRIMM is trying to instill humor now, as well as drama, it doesn’t quite live up to that level of quality, with the writing being a little less snappy. This series will either grow into itself and be something great and memorable, like Buffy, or fall apart, like Heroes, and be nothing but shattered dreams