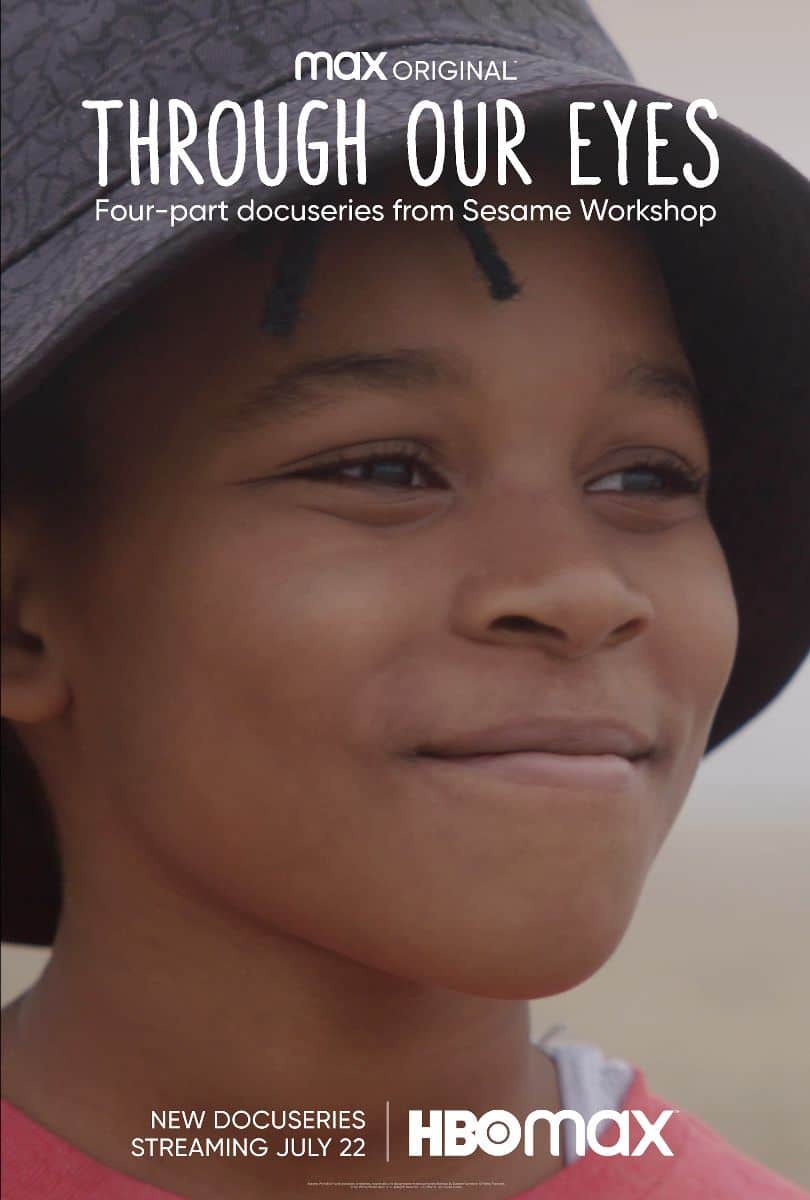 HBO Max has released a trailer and key art for the documentary series THROUGH OUR EYES, debuting on the platform THURSDAY, JULY 22. Produced by Sesame Workshop, THROUGH OUR EYES spotlights the perspectives of children as they experience some of the most challenging issues facing families today in four 30-minute films designed as a co-viewing experience for adults and kids ages 9 and older. This is the first documentary series produced by Sesame Workshop with each episode being directed by award-winning and nominated filmmakers.

THROUGH OUR EYES: APART
One in 14 American children will experience the incarceration of a parent, and 2.7 million children have a parent in prison right now. This introspective portrait of loss intertwined with moments of joy reminds us of the forgotten consequences of the criminal justice system – the families of those left behind. APART shares the experiences of three resilient children navigating the complex emotional challenges of their parents’ incarceration as their families work to provide stability and support.
Directed by Primetime Emmy® winners Geeta Gandbhir (“I Am Evidence,” “Call Center Blues”) and Rudy Valdez (“The Sentence”)
Produced by Anya Rous and Jessica Devaney

THROUGH OUR EYES: UPROOTED
Since 2016, millions of people in the United States have been displaced by weather-related disasters that are occurring more frequently and with greater intensity. In UPROOTED, two children in Iowa face the loss of their family farm due to climate change, while a third in Texas waits for her hurricane-damaged home to be rebuilt.
Directed by News and Documentary Emmy Award nominee Talleah Bridges McMahon (“Black America Since MLK: And Still I Rise,” “My Name is Pauli Murray”)
Produced by Talleah Bridges McMahon and Jim McMahon

THROUGH OUR EYES: HOMEFRONT
There are currently 1.9 million servicemembers and veterans relying on caregiver support in the United States, and 3.4 million children live in the homes of these caregivers. In HOMEFRONT, three children of veteran families cope with the emotional impact of having a wounded parent, navigate the unique challenges of visible and invisible injuries sustained during military service, and together journey toward collective healing.
Directed by News and Documentary Emmy Award winner Kristi Jacobson (“A Place at the Table,” “Solitary”)
Produced by Alexandra Blaney and Netsanet Negussie
Executive Produced by Susan MacLaury and Albie Hecht

THROUGH OUR EYES: SHELTER
(2021 AFI DOCS Audience Award Winner for Best Short)
America’s homelessness crisis can feel distant and bureaucratic until you see it through the eyes of a child. SHELTER follows three unhoused children and their parents in Los Angeles as they navigate housing insecurity. While each family’s circumstances are different and their futures uncertain, they are bound by love and a common determination to keep their dreams alive.
Directed by Academy Award nominee Smriti Mundhra (“St. Louis Superman,” “A Suitable Girl”)
Produced by Maya Gnyp and Cheyenne Tan

THROUGH OUR EYES is the latest series in Sesame Workshop’s burgeoning slate of shows to be featured on HBO Max, including its flagship program “Sesame Street.” The nonprofit additionally creates Sesame Street in Communities content addressing the complex challenges presented in THROUGH OUR EYES and others faced by children and families today.

About Sesame Workshop
Sesame Workshop is the nonprofit educational organization behind Sesame Street, the pioneering television show that has been reaching and teaching children since 1969. Today, Sesame Workshop is an innovative force for change, with a mission to help kids everywhere grow smarter, stronger, and kinder. We’re present in more than 150 countries, serving vulnerable children through a wide range of media, formal education, and philanthropically funded social impact programs, each grounded in rigorous research and tailored to the needs and cultures of the communities we serve. For more information, please visit www.sesameworkshop.org.