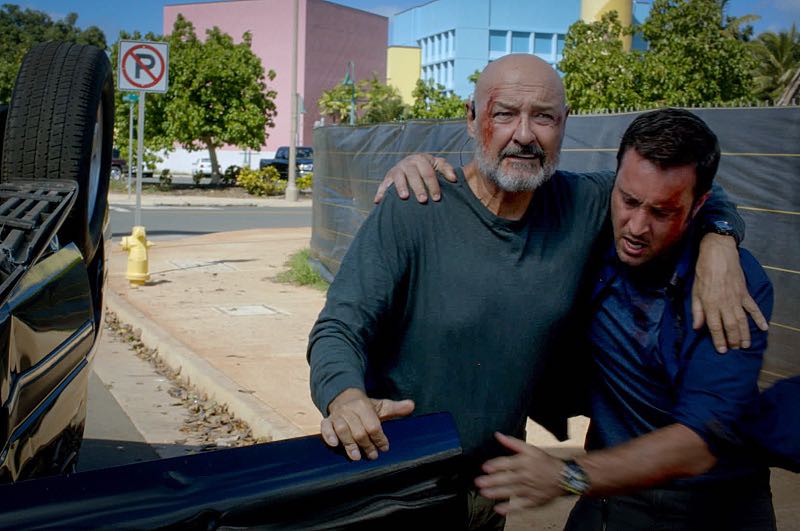 Joe was back on the island escorting a man who contracted a deadly strain of bird flu. Oddly enough, that wasn’t the most awkward thing about their reunion. What they really had trouble with was the fact that Steve finally had his chance to confront Joe about the startling information Wo Fat had given him – you know, right before Steve put a bullet through his skull. I was dying to see where that conversation was going to go, but of course the wrecking ball kind of put an end to that.

Then it was all about trying to prevent the end of the world as we know it, which wasn’t easy. First they were just trying to get Lange back, but once they realized the virus had already been weaponized, they had to figure out how it was being distributed. That led to the whole bee thing and a scene that I literally could not watch. As soon as I saw that poor guy was locked up in a room and bees were coming in through the vents, I hit the fast-forward button on my DVR faster than you could say, “Oh hell no!”

It wouldn’t be an episode of Hawaii Five-0 if Steve didn’t do something stupid and Danny didn’t yell at him for it. We got a little bit of that in the beginning of the episode when Danny first walked into the hospital, but the true stupidity (yet heroic) act came from Joe. I wondered if Joe drove off that bridge partially to get away from Steve’s questions, but he didn’t actually kill himself. Just like Steve, Joe may do things that look insane, but he’s usually got a plan for how to get himself out.

When it was all over, Steve and Joe got the chance to finish that conversation – albeit through the glass of a quarantine suite. But there was a new wrinkle: Doris was missing and Steve had a sneaky suspicion that Joe had let her know that Steve was looking for her. Joe didn’t exactly deny it, but he did ask Steve to trust him. But the moment Steve said he trusted his old friend, I knew it was a lie.

I’m glad that Steve put his trust in Danny instead and the two of them are now going to be working together to monitor Joe and figure out what is happening with Doris. Because I can’t wait to see the conversation that happens when Steve finally gets a face-to-face with his mother. I’m going to need a big bucket of popcorn to watch that when it happens.

Steve admitting that finding out from Wo Fat did indeed piss him off, enough to put a bullet in his head.

Totally jumping out of my skin when that wrecking ball hit the car. Wow!

Not being at all surprised that Steve went off by himself before back-up could arrive. As Danny might say: That’s classic Steve.

Not being able to help but smile at the combination of pissed off and worry on Danny’s face as he walked through the hospital hallway.

“Don’t worry, it’s going to take more than a wrecking ball to stop Steve.” – And. now I have a strong desire to see Steve riding a wrecking ball. Get on that, Tumblr.

The kid asking Joe not to let his dad die. That hurt my heart.

Grover: “Either we’re right about our virus doctor or this guy really doesn’t like company.”

Grover finally realizing that Steve wasn’t born a crazy son of a bitch – Joe taught him. Yep, that sounds about right.

Literally having to fast-forward through the scene with the bees. I can handle a weaponized flu virus designed to kill the entire planet, but I can’t take no bees.

Chin figuring out how to actually put an APB out on every bee on the island. Way to go, Chin!

Joe finding a rather unique way to neutralize the bee threat.

Yep, I’m so with Joe and Danny. Steve would have done EXACTLY the same thing in Joe’s shoes.

Joe admitting that he wasn’t thinking of the world when he drove off that pier – he was thinking of Steve.

Finding out that Steve had put surveillance on Joe. That man is brilliant.

What did you think of this episode of Hawaii Five-0? Do you trust Joe or do you think he could have tipped off Doris?