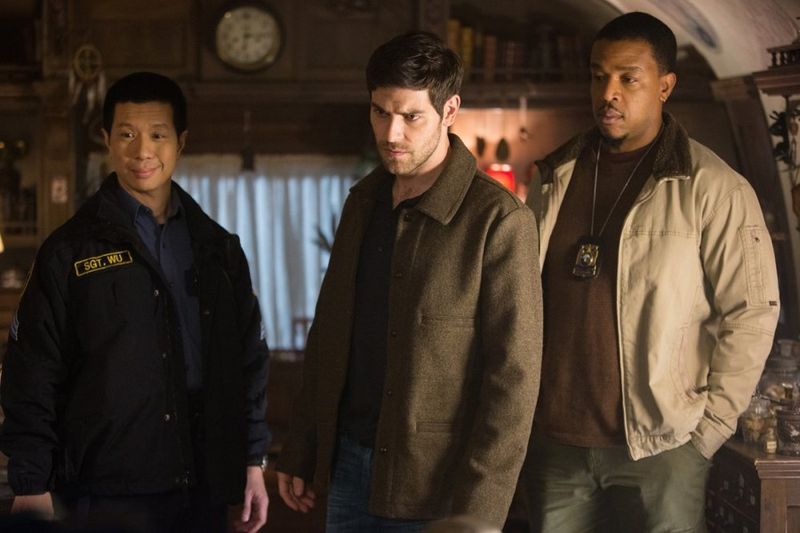 NBC’s GRIMM is back to case-of-the-week stuff in this week’s “Death Do Us Part,” unfortunately. A team of ghost hunters encounter a Wesen that murders one of their own. When Nick (David Giuntoli), Hank (Russell Hornsby), and Wu (Reggie Lee) investigate, they discover a love triangle and a man gone insane in the creepy house. From there, it’s not hard to stop the haunting.

The main plot of “Death Do Us Part” is utterly predictable and trite. Right from the beginning of the hour, there is never a doubt in my mind that the husband is the killer and still hanging around. The official ruling from the connected original case five years ago is that the lover killed a husband and wife in bed, but that makes no sense to anyone who ever watches crime shows. It’s always a jealous spouse who is the guilty party, as it is here.

There is also no reason to ever suspect ghosts are real here. It would be cool if Grimm were to expand its world and the crazy man, Stetson (Derek Phillips, Friday Night Lights), really did see his dead wife, but he didn’t. This universe is full of strange creatures, but only living strange creatures, which keeps it somewhat grounded. It’s hard to complain about that choice, but since the episode is so annoyingly boring, I was hoping for a hint of something cooler.

In the end, Nick and his colleagues don’t even stop the killer. The dead lover’s spouse, Lily (Rebecca Wisocky, Devious Maids), shoots Stetson, thus ending his reign of semi-terror. Then they let her get away with it.

In this specific case, it’s true, the killer Wesen couldn’t really be jailed in the traditional sense. But he was mentally ill, not evil, and needed help and sympathy. Instead, he’s just executed. And the cops don’t do what cops are supposed to do, which is seek justice. Instead, they sweep it under the rug. There are very legitimate reasons that Nick, Hank, and Renard (Sasha Roiz) have gotten used to taking the law into their own hands, and a lot of times, that’s acceptable. Not here.

I was hoping Wu would be the voice to speak up and remind the others about the responsibility of the badge. Instead, in a mere couple of weeks, he’s settled right into being the gopher again, albeit a gopher in the know. There’s a scene in the trailer in “Death Do Us Part” where Nick ‘graciously’ allows Wu to read what he found about the Wesen they are hunting. This is the most Wu ever gets acknowledged by his co-workers, despite the fact that he finds the baddie in the book and an image on a melted camera. Wu is highly capable; now we just need to see him come into his own.

The one part of “Death Do Us Part” that is interesting is the thread where Renard introduces Juliette (Bitsie Tulloch) to the mysterious Henryetta (Garcelle Beauvais, Franklin & Bash). But, as has become the case for such stories, it’s relegated to a few little scenes, moving forward very slowly. It’s also worth mentioning that Nick, a trained detective who isn’t that consumed with his case this week, continues to ignore Juliette’s strange behavior, which is completely unrealistic.

Once upon a time, Grimm was growing into a series to watch. In the tradition of Buffy the Vampire Slayer, it was crafting a compelling mythology and an engaging narrative. Now, it’s mostly gone back to being a police procedural that just happens to have supernatural creatures in it.

This follows the same trend of Sleepy Hollow over on FOX, about which a studio exec told the press it had become too serial. This is a disturbing trend for the broadcast networks. I’ll speak more in depth about this in my Jerome-ing column on Blogcritics.org this week, but at a time where choice in programming has never been broader, cable and internet companies are cranking out high-quality shows that earn accolades and legions of passionate fans. The Big Four continue to ignore that, looking at an outdated commercial-based model where only the least technologically-literate people looking for easy “fast food” television turn. This pool is shrinking as evidenced by the rampant ratings erosion. Forcing GRIMM back into a restraining box is not the answer.