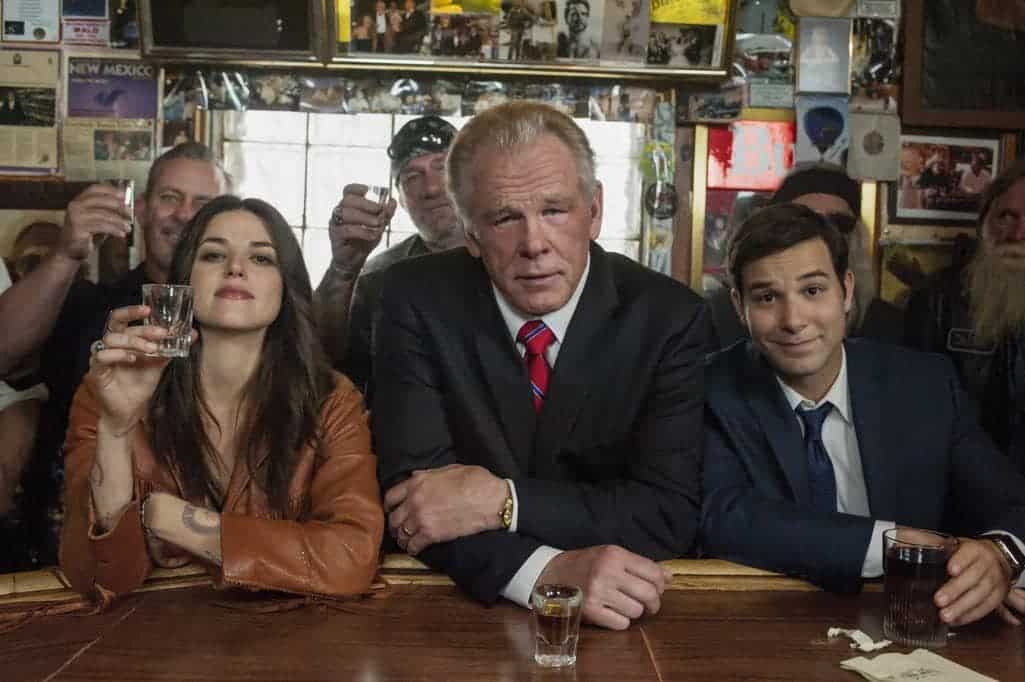 Premium movie service Epix joins the original scripted world this weekend with two new shows. One, a comedy, is called GRAVES, and is about a fictional former Republican president named Richard Graves. Twenty-five years after he served as the leader of the free world, Graves’ policies and decisions from the Oval Office come back to haunt him. Realizing he has let his country down, and facing a legacy as the possible worst president ever, Graves wakes up and decides to start fighting for the American people once more.

President Richard Graves is a conglomeration of a number of different Republican presidents. He held office around the same time as George H.W. Bush, considered failed at the time, though Bush’s reputation has improved in the interim, while Graves has gone down. He is a gold standard for certain members of his party, like H.W. has become, and like Reagan always has been. He also shares the failed assassination attempt backstory with Reagan. President Graves had the disastrous polices of George W. Bush, getting us into unpopular wars and slashing spending on important research, while ridiculously beefing up the military and tanking the economy. So he isn’t any one of these real POTUSes (POTUSi?), but rather, a bunch of them put together.

This is probably a wise move. It allows Graves to be fictional and make decisions without worrying about what the real men are and did, and also takes a realistic look at both the positives and negatives of GOP administrations over the past few decades. It’s an intriguing concept, especially when coupled with the desire to make up for past mistakes that Graves now exhibits, and I think Graves probably ends up being the ideal representative of the traditional Grand Old Party by the end of episode one.

The title role is wonderfully portrayed by Nick Nolte (Warrior, Luck, Gracepoint), who captures a layered, authentic man. Graves is a total asshole to those around him, hazing his new assistant, Isaiah Miller (Skylar Astin, Pitch Perfect, Ground Floor), ignoring the political aspirations of his wife, Margaret (Sela Ward, CSI: NY, Gone Girl), and destroying property that is only sort of his. But even in the pilot, Nolte is allowed a few moments to show the raw vulnerability, the compassionate side of the man, and exhibit that he does care about more than just himself, even when he lets down his loved ones. It’s a very interesting performance, and I liked it a lot.

To more fully flesh out the story, and also likely to add subplot drama, we are introduced to Graves’ daughter, Olivia (Helene Yorke, Masters of Sex), who shares many of her father’s negative qualities, and is going through something devastating herself. I really don’t know how Margaret will balance two break-downs at once while furthering her own agenda, but Olivia is more an obstacle than anything else right now.

All of these actors and the promising story are enough to get past my early distaste. GRAVES makes the grave (pun intended) error of beginning with some real political cameos, chief among them that of Rudy Giuliani. True, Graves isn’t thrilled with these guys, but he treats Giuliani nicer than most, and after recent polarizing press appearances, seeing Giuliani in this comedy context is likely to turn off many potential viewers. Hopefully, most will chalk it up to a decision made some time ago and look past it, because the rest of the pilot was worth watching. There are others that appear, but none nearly as offensive as the former mayor.

GRAVES premieres tonight on Epix, and viewers can check out the first two episodes free now on Epix’s website.