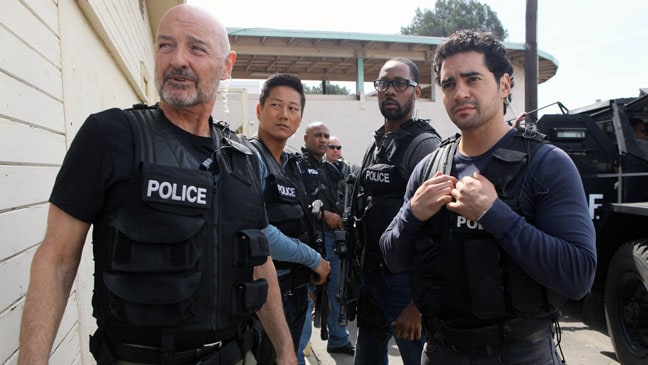 FOX is getting into the original summer series game with the gritty new crime drama GANG RELATED. Sort of a cross between Southland and Graceland, the show centers on Ryan Lopez (Ramon Rodriguez, The Wire), a street-wise cop working as part of a new inter-agency, gang-focused task force. The problem for Ryan is that he is part of a gang, too, beholden to the man who raised him, and providing information about the unit’s activities on the sly.

Ryan is torn between two worlds, his old way of life and his new one. He loves Javier Acosta (Cliff Curtis, Missing), who is good to Ryan, like a father. But he’s also really liking being a part of the team led by Sam Chapel (Terry O’Quinn, Lost). The double dealing is taking its toll on Ryan, who seems like a good guy at heart, and who definitely doesn’t want to end up in jail. Which will he choose?

It would be one thing if GANG RELATED presented two completely different worlds, a good one and a bad one. Clearly, the law enforcement agency is noble, trying to clean up the streets. However, Sam is getting frustrated with their lack of progress, and starts to turn to methods not everyone will approve of. On the other hand, Javier, spurred on by his son, Daniel (Jay Hernandez, Nashville), a banker, is trying to take the organization onto the straight and narrow. So neither side operates as black or white.

One would assume that the blurred lines mean GANG RELATED is a deep show, not separating the characters into good and evil, presenting layers to all involved. In a way, that’s true. Ryan, Sam, and Javier are interesting people, shaped by circumstance, and vulnerable to shifting winds, should the status quo be upset. There is much that can be explored with this trio, all excellent performers, that will make GANG RELATED interesting.

On the other hand, it’s also stocked with tired stereotypes. Javier’s other son, Carlos (Reynaldo Gallegos, Sons of Anarchy), is an unapologetic son of a bitch. It’s easy to see that he will not get along well once Javier goes legit, and he needs to be removed from the equation if the family has a chance. Javier can’t cut off his own son, though, so we’re stuck with this unwinnable scenario that feels forced. How did Carlos become so bad while still being tied to this family that is not the same way?

Just as bad is Sam’s estranged daughter, Jessica (Shantel VanSanten, One Tree Hill), who works for the D.A. and is often at odds with her dad. We understand why she might be, given the side of Sam revealed in GANG RELATED’s pilot, but their father-daughter relationship is not exactly new ground, and is set up solely to provide drama, coming across as unnatural, especially because of her job.

[quote]The premise itself has been done before, including quite recently. Because Mob Doctor, starring Jordana Spiro, was yanked off the air quickly, not many viewers may remember it. But apart from being a medical drama instead of a cop show, the two share a lot of the same DNA. GANG RELATED does not distinguish itself enough from this, and others in the crime genre.[/quote]

Why is GANG RELATED full of police? Aren’t there enough shows like this on the air? Why not take a different tact, keeping the gang-going-straight story, and even including a cop or two on their tails, but giving prime focus to, say, Daniel, who has a job not seen on three dozen shows already airing? It’s this lack of originality that hurts the series in my eyes, as entertaining and compelling as its leads may be.