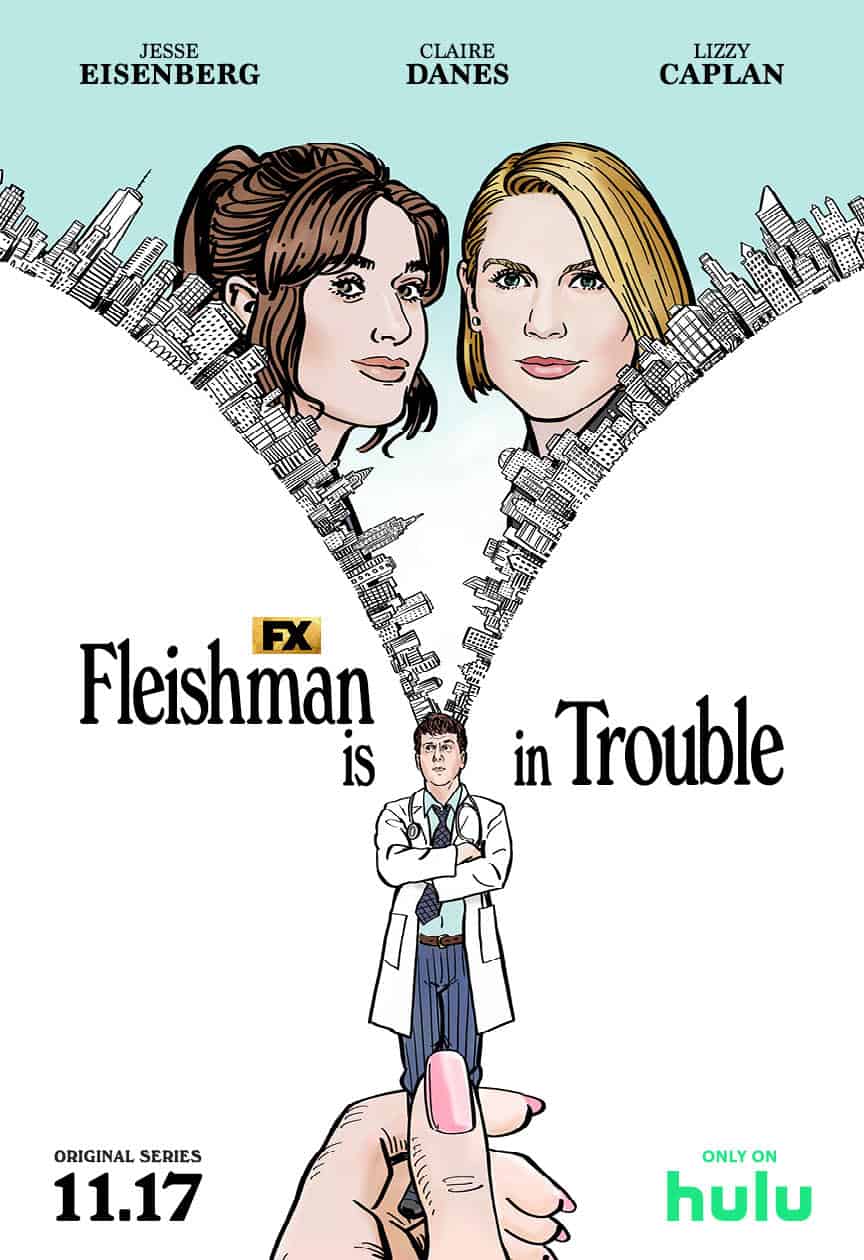 FX’s Fleishman Is In Trouble, based on Taffy Brodesser-Akner’s critically acclaimed, best-selling novel, will premiere Thursday, November 17 exclusively on Hulu. The premiere will feature the first two episodes of the eight-episode series. A new episode will be available each subsequent Thursday. The series will soon be available on Star+ in Latin America and Disney+ under the Star banner in all other territories.

Fleishman Is In Trouble is the story of recently divorced 41-year-old “Toby Fleishman” (Jesse Eisenberg), who dives into the brave new world of app-based dating with the kind of success he never had dating in his youth, before he got married at the tail end of medical school. But just at the start of his first summer of sexual freedom, his ex-wife, “Rachel” (Claire Danes), disappears, leaving him with 11-year-old “Hannah” (Meara Mahoney Gross) and 9-year-old “Solly” (Maxim Swinton) and no hint of where she is or whether she plans to return. As he balances parenting, the return of old friends “Libby” (Lizzy Caplan) and “Seth” (Adam Brody), a potential promotion at the hospital that is a long time coming — and all the eligible women that Manhattan has to offer — he realizes that he’ll never be able to figure out what happened to “Rachel” until he can finally face what happened to their marriage in the first place.

The series was created for television by Taffy Brodesser-Akner, who adapts from her acclaimed novel and executive produces alongside Sarah Timberman, Carl Beverly and Susannah Grant. Valerie Faris & Jonathan Dayton (Little Miss Sunshine, Battle of the Sexes) also executive produce as well as direct multiple episodes across the series. Shari Springer Berman and Robert Pulcini serve as additional executive producers on the multiple episodes they directed. Fleishman Is In Trouble is produced by ABC Signature.

FX, a division of Disney General Entertainment, is a global multiplatform brand that develops, produces, commissions and markets original programming for Hulu and the FX and FXX linear channels in the U.S., and Star+ in Latin America and Disney+ in all other international territories. The FX brand mark appears above the title across its entire slate of originals. Over the past two decades, FX has been responsible for some the most-critically acclaimed and award-winning shows on television. Some of the brand’s current and legacy titles include the dramas American Horror Story, American Crime Story, The Americans, The Bear, Damages, Fargo, Justified, Nip/Tuck, The Old Man, The Patient, Pose, Rescue Me, The Shield and Sons of Anarchy; the comedies Archer, Atlanta, Better Things, DAVE, It’s Always Sunny in Philadelphia, Little Demon, Reservation Dogs and What We Do in the Shadows; and a growing slate of docuseries and documentary films.

One of the Disney Television Studios, ABC Signature produces many of ABC Entertainment’s most significant hits, including “Grey’s Anatomy,” and “Station 19”; co-productions “The Good Doctor,” “A Million Little Things,” “The Rookie,” “The Rookie: Feds,” “Home Economics,” and late-night talk show “Jimmy Kimmel Live!” ABC Signature’s returning and upcoming series include “grown-ish” “The Watchful Eye” and “Everything’s Trash” for Freeform; “Godfather of Harlem” for EPIX; “Bad Sisters” and “Five Days at Memorial” for Apple; “Reasonable Doubt” and “This Fool” for Hulu; and “Criminal Minds: Evolution” for Paramount +.  Disney +, series include “The Mighty Ducks: Game Changers,” “Big Shot” and the upcoming “National Treasure: Edge of History” and “Muppets Mayhem.”