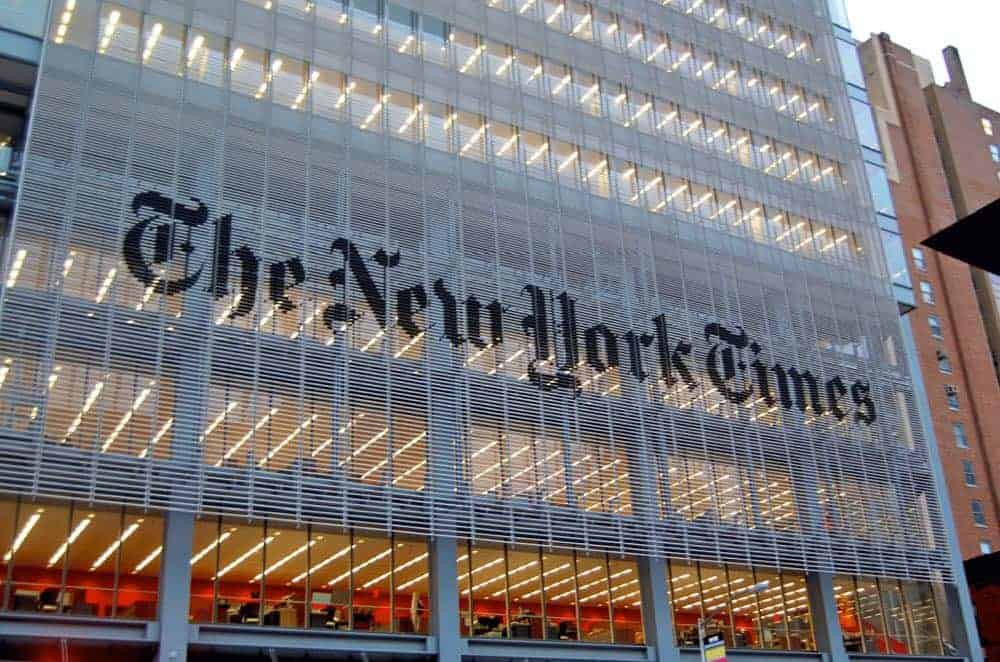 FX has landed the first-run North American rights to The New York Times’s first major foray into TV news, called The Weekly, in partnership with Hulu, which will be the exclusive SVOD streaming home to new episodes of the series the day after air. The announcement was made today by John Landgraf, CEO of FX Networks and FX Productions.

In addition to the FX linear telecast and Hulu, episodes will also be available on FX’s VOD services, FXNOW (with commercials) and FX+ (commercial-free) to authenticated subscribers.

This marks FX’s first entry in the ongoing weekly news genre and the network has committed to a minimum of 30 episodes with the series scheduled to premiere later this year. The series is produced by The New York Times and Left/Right, a Red Arrow Studios company. WME represented the project.

“The New York Times is synonymous with excellence and FX is honored to be chosen as their partner on what will be the first entry for both organizations into the weekly TV news business,” said Landgraf. “A free press is vital to the health of our American democracy. The Weekly will give viewers compelling stories about the courage and commitment New York Times journalists bring to seeking out and reporting the truth. We also want to thank our partners at Hulu on this deal and the team at Left/Right.”

The Weekly will be a narrative documentary news program that includes one or two of The Times’s biggest and most important visual stories each week. Viewers will be with those stories and the reporters as the show brings them to life. Much as The Daily podcast has taken a narrative approach to news that introduces listeners in a new way to host Michael Barbaro and reporters like Mike Schmidt, Maggie Haberman and Rukmini Callimachi, The Weekly will find the stories behind the headlines that would otherwise be left on the cutting room floor.

Meredith Kopit Levien, chief operating officer of The New York Times Company, said, “Our ambition with The Weekly is to bring the authority and excellence of New York Times journalism to the largest possible television audience. Partnering with FX and Hulu together for distribution represents an entirely new and uniquely powerful way do just that. The leadership at each of these organizations demonstrated real enthusiasm for The Weekly and for work of The Times. We are incredibly excited to work with them, and with our production partners at Left/Right, to make millions more people spend much more time with quality, original journalism.”

Sam Dolnick, an assistant managing editor who will oversee The Weekly on behalf of The Times’s newsroom, added, “The Times newsroom has the raw ingredients for must-watch TV: on-the-ground reporting, unmatched expertise, and a steady stream of scoops. Now, we have the right partners to create a new kind of narrative news show that will have an unconventional approach and a modern sensibility and will help more people understand the world each week.”

Reporters from The Times will act as guides to their own reporting. Viewers will see them chasing their stories, watch as they conduct their interviews, and generally have the sense of being along for the ride. There won’t be a host. The whole idea for this show, what makes it unprecedented, is that the layers that separate viewers from New York Times journalism will be eliminated. For generations, on the biggest stories of the day, the TV news programs have generally followed The Times, using its front page as a guide, bringing on its reporters, after the fact, to share insight into their journalism. This show will be different. The Weekly will set the agenda, just like The Times has always done.

“It’s a documentary filmmaker’s dream to be given an all-access pass to the reporters and editors at The New York Times – journalists who are constantly breaking the news, scooping the competition, and starting some of the most important conversations of our time,” said Ken Druckerman, co-president of Left/Right. “Our goal in this series is to add a new dimension to these stories by bringing their words and work to life on the screen.”

Left/Right, cofounded by Ken Druckerman and Banks Tarver, are the award-winning producers of acclaimed docuseries including This American Life and The Circus for Showtime, as well as multiple episodes of Frontline for PBS.