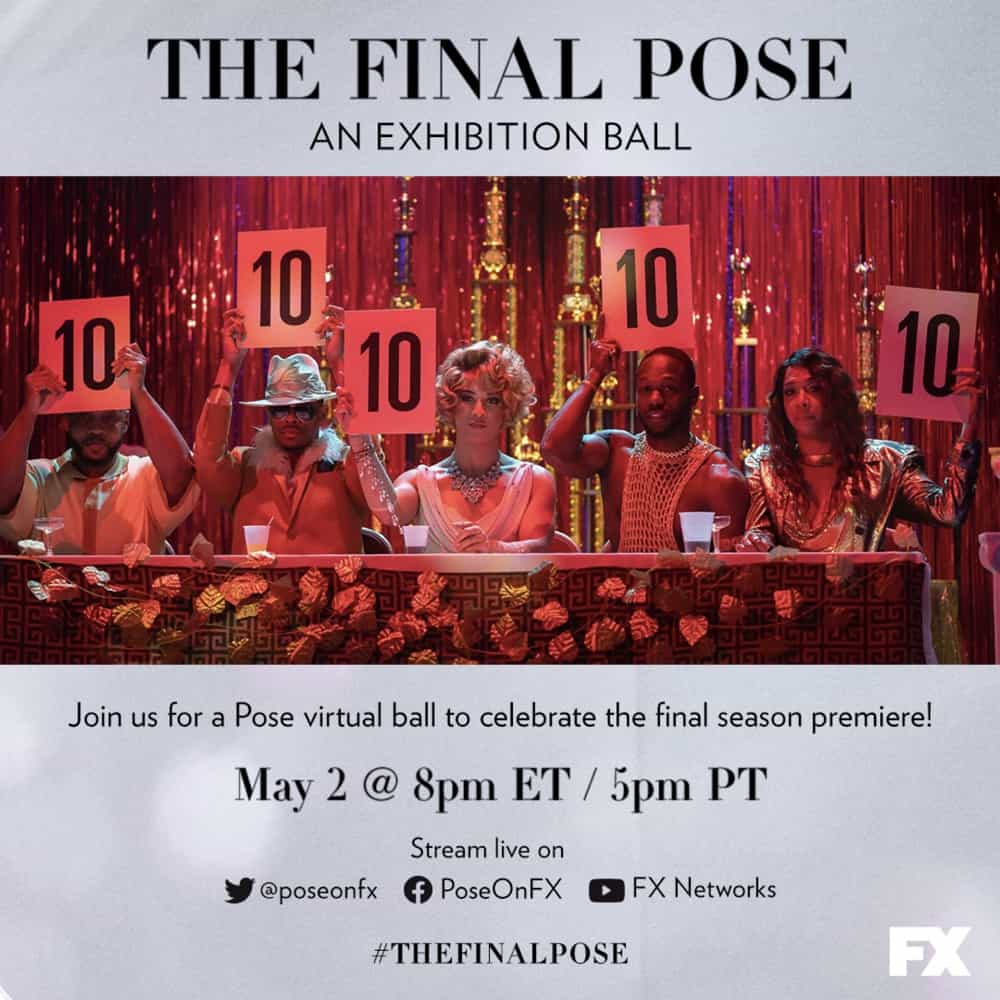 Get in on the action as Pose invites everyone to The Final Pose – An Exhibition Ball – a virtual event immediately preceding the premiere of the series’ third and final season on May 2 on FX. The online event will run for 90 minutes and feature exclusive messages from show talent, guest judges, ball performances, and more.

Twiggy Pucci Garçon, Pose’s runway choreographer, will produce and host the celebration honoring ball culture from the 80s to today. Open to all to attend, fans can take part in this unique experience from the comfort of their own homes and view the virtual ball live on Pose social platforms.

The Final Pose – An Exhibition Ball

Followed by the Pose season three premiere at 10 p.m. ET/PT on FX

Pose is a drama spotlighting the legends icons and ferocious house mothers of New York’s underground ball culture, a movement that first gained notice in the late 1980s. In this final season, it’s now 1994 and ballroom feels like a distant memory for Blanca who struggles to balance being a mother with being a present partner to her new love, and her latest role as a nurse’s aide. Meanwhile, as AIDS becomes the leading cause of death for Americans ages 25 to 44, Pray Tell contends with unexpected health burdens. Elsewhere, the emergence of a vicious new upstart house forces the House of Evangelista members to contend with their legacy.

The Peabody and AFI-winning and Emmy® and Golden Globe® Award-nominated drama made television history in its first season by featuring the largest-ever cast of transgender actors in series regular roles, including Mj Rodriguez, Dominique Jackson, Indya Moore and Hailie Sahar, who star alongside Emmy and Tony Award®winner and Golden Globe nominee Billy Porter, Dyllón Burnside, Angel Bismark Curiel, Sandra Bernhard and Jason A. Rodriguez. The series also features the largest recurring cast of LGBTQ actors ever for a scripted series, and boasts a full roster of LGBTQ and POC behind-the-scenes as producers, writers, directors and crew.

FX is comprised of the networks FX, FXX and FXM, the video on-demand app FXNOW, and the streaming hub FX on HULU that features exclusive FX series, next day access to current FX and FXX series, and FX Networks’ library of legacy series. FX on Hulu exclusive series include Devs, Mrs. America, A Teacher and the upcoming The Old Man, Y: The Last Man, American Horror Storiesand Fleishman is in Trouble. FX, the flagship general entertainment basic cable channel, launched in June of 1994 and is carried in 86 million homes. The diverse schedule features a growing roster of critically-acclaimed and award-winning hit drama series including Pose, Snowfall, Mayans M.C., and Taboo; the critically-acclaimed limited series American Horror Story, Fargo, American Crime Story, FEUD, Black Narcissus and the upcoming Shōgun and Pistol; acclaimed hit comedy series including Atlanta, Better Things, What We Do in the Shadows, Breeders and the upcoming Reservation Dogs; the half-hour series Mr Inbetween, The Choe Show and the Untitled B.J. Novak Project; a slate of docuseries and documentary features, including The New York Times Presents, The Most Dangerous Animal of All, AKA Jane Roe, A Wilderness of Error, Hip Hop Uncovered and Hysterical; and the FX Original Movie A Christmas Carol. FX is the former home of the critically-acclaimed and award-winning hit drama series The Shield, Nip/Tuck, Rescue Me, Damages, Sons of Anarchy, Justified and The Americans. The network’s library of acquired box-office hit movies is unmatched by any ad-supported television network. FXX, the newest network, launched in September 2013 and is carried in 82 million homes. Geared towards a young adult audience, the schedule features original series, movies, and acquired series. The channel is anchored by the acclaimed hit comedies It’s Always Sunny in Philadelphia, the Emmy® Award-winning comedy series Archer, DAVE and Cake, a weekly showcase of short-form comedy programming. FXX is also the cable home to The Simpsons, the longest-running comedy in TV history. FXM was launched in October of 1994 and is now carried in 57 million homes. Its schedule features classic films during the day (FXM Retro), contemporary box office hits and acclaimed, award-winning films, and short-form award-winning original programming in the evening.