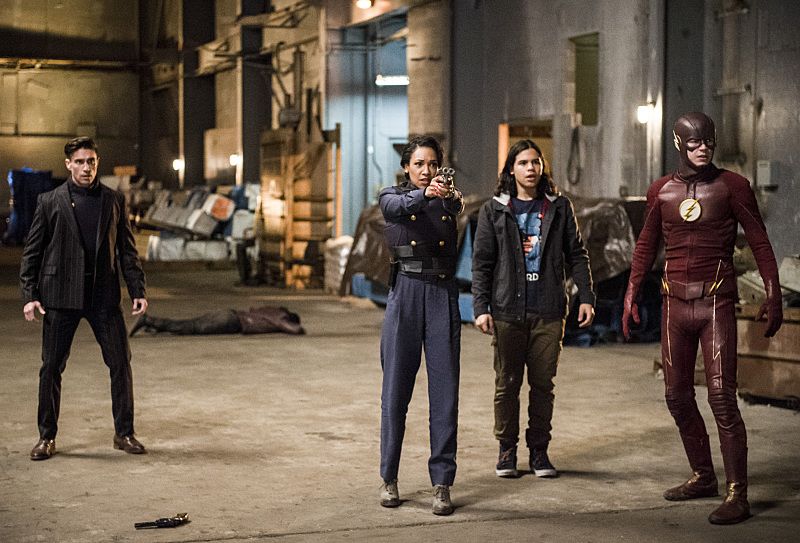 Easter eggs, doppelgangers and bow ties, oh my! The CW’s most popular hit series is treating fans to something special. For the next two episodes of THE FLASH, Barry, Harry and Cisco head to Earth-2 to save Wells’ daughter.

Expect this journey to be problematic and maybe even traumatic. But there’s also the opportunity for viewers to see their favorite characters…with a twist. In a press screening and Q&A, executive producers — and brothers — Todd and Aaron Helbing previewed the first part of this epic mission.

According to Todd, “Barry, Cisco and Wells go over to Earth-2 with a definitive plan that goes awry. And they are left having to improvise and find themselves in a completely different scenario than they anticipated. And have a race of their life to get back.”

Before the danger commences, fans will witness Barry and Cisco’s adorable reactions to seeing Earth-2 up close and personal for the first time. It’s this fully realized world where it looks both modern and retro at the same time. “When you can be on a show where anything is possible, it’s so freeing,” says Aaron.

Todd agrees. “It’s cool just seeing these different realities. Some of these images we’re pulling straight from the pages of the comic books, so it’s really just an amazing experience and a lot of fun.”

It’s also cool to see Danielle Panabaker as Killer Frost along with Ronnie Raymond’s Earth-2 doppelganger, Deathstorm. Todd thinks this is the perfect way to see Caitlin and Ronnie’s evil versions come to life. “It felt the most appropriate and the most organic to go over there and meet Killer Frost and Deathstorm and get to see a completely different aspect of their superpowers,” he reveals. “Not really their superpowers but their personalities to go along with those superpowers.

It was an equally natural decision to let Jesse L. Martin unleash his real-life superpower: his vocal talents. Yes, the RENT alum finally gets to belt out tunes on THE FLASH. In Earth-2, Joe West isn’t a cop. He’s a singer. “Our cast, they’re all extremely talented. Every time we see them do stuff like this it blows our minds,” says Todd. “I think Jesse, it felt the most organic. With the doppelganger aspect, it just felt the way to introduce that ability that he has.”

For Barry and Iris fans, this isn’t an episode to be missed. Earth-1 Barry inevitably runs into a fierce and fabulous Earth-2 Iris. Prepare for some confusion…at first. And then some sparks. Todd feels “fans are going to go crazy over” what happens between these two characters.

“Welcome to Earth-2” presents a different spin on our favorite forensics scientist/speedster. This one wears glasses, a bow tie and may or may not worship Harry Wells. “I think a big section where people are gonna have a lot of fun is seeing Earth-2 Barry. He’s very entertaining,” teases Todd.

Creating this alternate reality, dropping a number of Easter eggs, introducing doppelgangers, lacing in intricate mythology — it was a massive challenge that the brothers relished. “I think we had a giant board of 50 ideas and we had to just whittle them down to the bare bones,” explains Aaron.

“But you just try to pick and choose what you think is best,” continues Todd.

“Hopefully, we did that,” says Aaron.

See for yourself when THE FLASH travels to Earth-2 tonight at 8/7c on the CW.