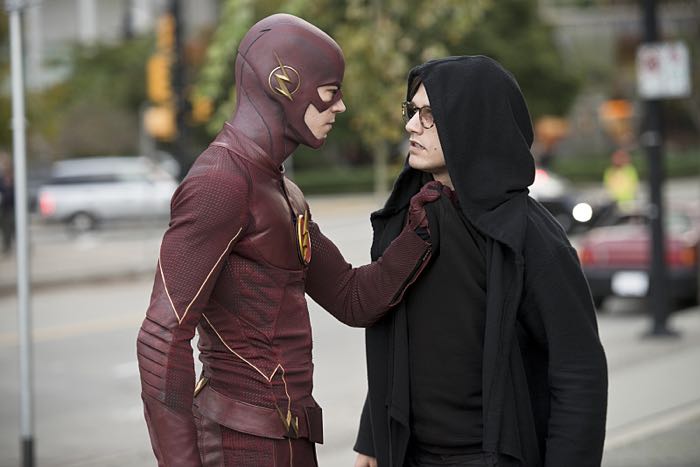 If you’re a fan of The Flash, then you’re probably already excited for the next episode. The Pied Piper is coming and I can assure you that he is as evil, and as fun, as you would hope. The good people at the CW screened “The Sound and the Fury” for the press and now that I’ve seen it, I’ve got some facts you need to know about the episode.

Don’t worry, you won’t find any real spoilers here, just lots of cool teasers to get you even more excited for tonight’s installment.

If you’ve been enjoying the bonding moments between Joe and Barry, you’ll be happy to learn that there are plenty more in this episode. But Dr. Wells and Barry also have a few moments of their own. Will Barry’s fondness for Dr. Wells overshadow his bond with Joe? Well, you’ll just have to watch and find out.

Hartley Has a Secret

Hartley Rathaway (aka The Pied Piper) makes more than sound waves when he comes back into Dr. Wells’ life. The doctor’s former protégé declares he has a secret about Dr. Wells and I can tell you that it is a doozy and it will absolutely affect the doc and everyone around him. In fact, the secret is so big that it actually affects everyone in the city. I told you it was a big one.

Plenty of Secrets to Go Around

But Hartley’s little tidbit about Dr. Wells isn’t the only secret in this episode. Let’s just say that there are some other characters that are hiding things. I can’t tell you what is being hidden or who’s hiding it, but I will tell you that if Barry finds out, he’s not going to be happy.

The episode gives fans a peek into the past when it shows Cisco’s first day at work. Yeah, sure, there’s lots of drama as he meets Hartley for the first time, but for me the best part was Cisco’s tee-shirt. Trust me, you’re going to love it.

Iris gets a new job with a real newspaper, but unfortunately she discovers pretty quickly that it’s not all it’s cracked up to be. Not only is she paired up with a senior reporter who’s a complete jerk, she also learns that the reason she was hired may not have had anything to do with her talent. She’ll be fighting to prove that she’s the right person for the job, but you might be surprised to see who ends up giving her a helping hand in the end.

The Genius of the Pied Piper

After watching this episode, I feel it’s safe to say that the Pied Piper is one of the toughest bad guys Barry and the rest of the group has ever faced. Just when you think the gang has managed to outwit him, Hartley pulls out another trick. Will he be too smart for the S.T.A.R. Labs team? Once again, you’re going to have to watch and see.

Another interesting thing that happened in this episode was learning a bit more about Reverse-Flash (aka Dr. Wells). There are things going on behind the scenes with him and his powers that I wasn’t expecting at all. Again, I can’t say much but I will say that it looks like Reverse-Flash could have some bigger issues going on besides the obvious ones (such as being evil and hiding it from all his friends).

This episode delivers quite the punch at the very end that is going to cause a ripple effect into the next episode. Obviously I can’t say what happens or with whom, but I’m just warning you right now: Don’t get up for a snack or a trip to the bathroom in the final minutes. Trust me, you won’t be sorry.