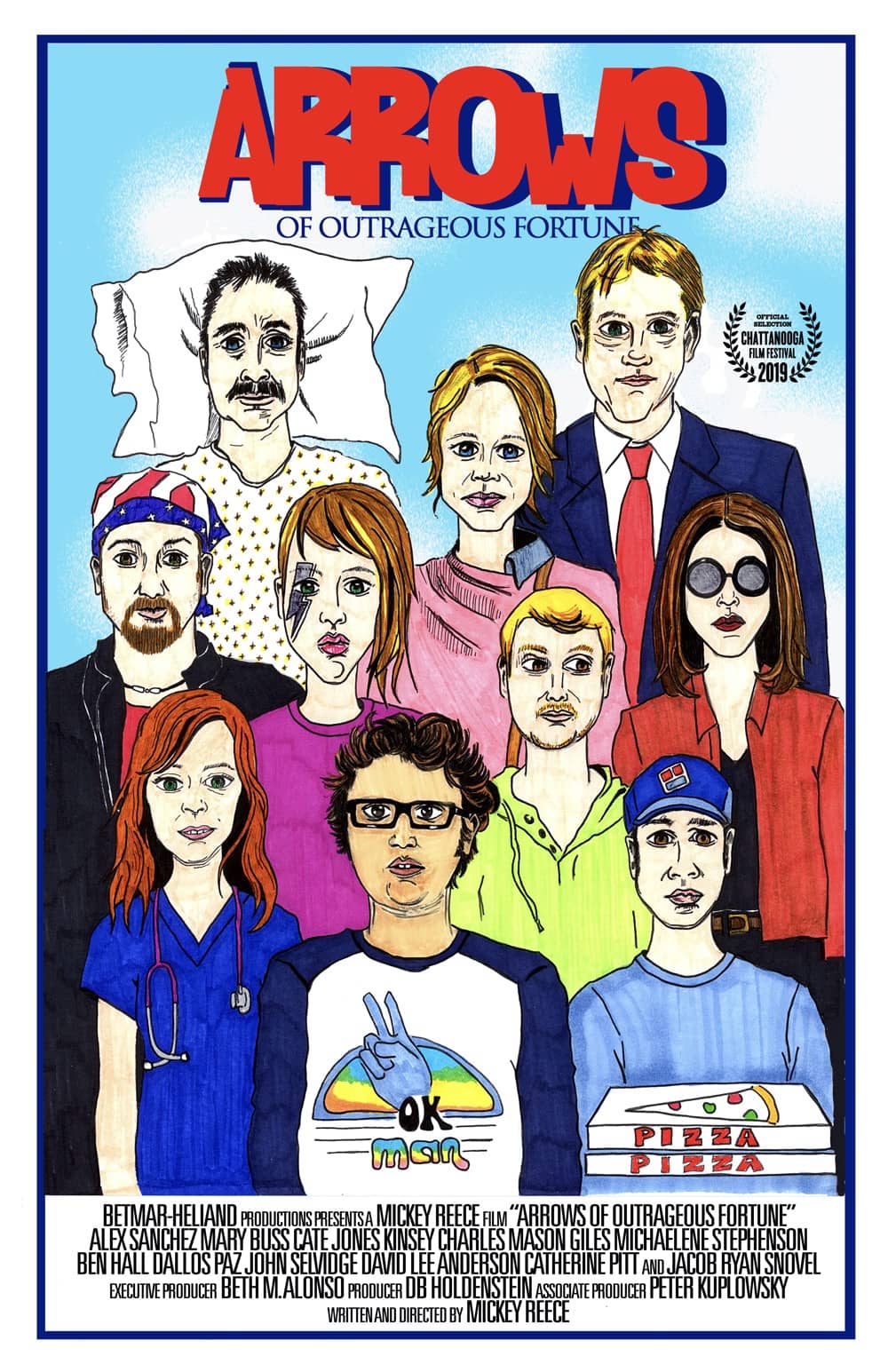 Mickey Reece’s new short film BELLE ÎLE premiered yesterday at Fantastic Fest to a strong reception and is now available for free on Alamo on Demand. A curated “six pack” of Reece’s filmography is also available at 50% off through October 31st.

Since 2008, Oklahoma filmmaker Mickey Reece has written, directed, and produced over twenty undistributed no-budget feature films, each one a unique experiment in form, genre and aesthetic, and most of which feature the same cast of eccentric actors culled from his local arts community.

Reece first attended Fantastic Fest in 2018 with his feature STRIKE DEAR MISTRESS AND CURE HIS HEART, and returned again in 2019 with CLIMATE OF THE HUNTER.

“Mickey’s trajectory since 2018 is a vital reminder of how transformative a film festival can be for an artist,” said Fantastic Fest programmer Peter Kuplowsky, who after introducing Mickey’s work at the festival has gone on to further support the filmmaker as a producer. “Despite being so prolific, Mickey was largely unknown outside Oklahoma City and a few regional festivals. The STRIKE DEAR MISTRESS premiere put him on a national radar that has directly led to a tenfold increase of resources for his subsequent films and now, the long overdue release of some of the filmmaker’s favourite past productions. It’s an inspiring testament to Mickey’s creative and persistent spirit. He didn’t wait for permission to create art, nor was he discouraged by obscurity. He just kept at it until audiences and the industry caught up with him.”

The Mickey Reece Collection includes five features from this veritable “Flyover Fassbinder’s” prolific filmography, none of which have ever been commercially released until now, as well as MICKEY REECE’S BELLE ÎLE, a brand new documentary short that examines the filmmaker’s early years.

Speaking on the special release of these selected works from his vast, but obscure filmography, Mickey Reece remarked: “I honestly never imagined a world where these movies would be made available to the public. I’m so grateful to Alamo Drafthouse for lending their amazing platform to showcase these works. I didn’t go to film school, or any college for that matter, so staring through the lens of a VHS camera was the beginning of my education. Being a die hard fan of cinema is what led me there. None of the movies in this six-pack are perfect but I couldn’t be more proud of them for that reason. Enjoy!”

About the films in The Mickey Reece Collection:

BELLE ÎLE (2020)
Against a collage of excerpts that span 34 films, Mickey Reece reflects on his early work and the community he has built over more than a decade of low-budget movie making in Oklahoma City.

ALIEN (2017)
A mythic portrait of Elvis Presley (Jacob Snovel) and those in his orbit — particularly his wife Priscilla (Cate Jones) — during the weeks that led to his television comeback special in 1968. Haunted by surreal visions and ridden with self-doubt, the listless King of Rock ‘n Roll quarrels with his management, friends and family on the Graceland estate before a sudden tabloid claim of a bastard son sends him on an existential road trip. From there, writer/director Mickey Reece conjures an entrancing journey that ruminates on the enigma of celebrity, the profundity of progeny, and the anxieties of art, while Joe Cappa’s stark black and white cinematography envelopes the outstanding ensemble cast in a dreamlike glow that is unlike any Elvis flick you’ve ever encountered.

ARROWS OF OUTRAGEOUS FORTUNE (2019)
After Henry (Alex Sanchez) reluctantly pays a visit to the deathbed of his wealthy and estranged father George Arrow (Ben Hall), he is unexpectedly bequeathed with an inheritance that places him within the envious crosshairs of his opportunistic extended Arrow clan. Navigating a parade of eccentric personalities, including his entitled stepmother (Mary Buss), his father’s emotionally turbulent mistress (Cate Jones), and even an apathetic pizza delivery man, Henry must learn to reconcile his lineage if he is to have any hope of forging his own path. Conceived by director Mickey Reece as a creative sandbox for its charismatic ensemble cast to play in and shot over a single week with natural lightning, Arrows of Outrageous Fortune is a widely entertaining sardonic farce that skirts Shakespearean sensibilities as it breezily barrels towards its unpredictable and… well… outrageous denomount.

STRIKE DEAR MISTRESS, AND CURE HIS HEART (2018)
Inspired in part by Ingmar Bergman’s AUTUMN SONATA and proceeding with a detached and dryly hilarious severity reminiscent of Yorgos Lanthimos, STRIKE DEAR MISTRESS AND CURE HIS HEART! concerns the acidic reunion of a famous pianist (Mary Buss) and her estranged daughter (Audrey Wagner) within the uncanny corridors of a run-down Victorian hotel. As writer/director Mickey Reece places these characters in a pervasively unnerving atmosphere, rife with theatrical explosions of emotion and the discordant timbre of Nicholas Poss’ magnificently manic score, he also confidently weaves in a surreal parade of peculiar digressions that deliriously teeter from comic pantomime to tableaus of abject horror. The result is an offbeat and oft-chilling confluence of ingredients that’s guaranteed to simultaneously baffle, delight, and captivate those with an appetite for the unusual.

SUEDEHEAD (2015)
Kenny Walker (Mason Giles) has a ten-step plan to get his life back together following a decade of jail time, but best laid plans go awry for the aspiring musician when he discovers that his girlfriend has moved on, his band has jumped scenes, and the only job his doting mother (Brenda Stacey) was able to get him is a security shift at a decrepit shopping mall under the supervision of a straight-laced square (Jacob Snovel). When a local mobster (John Selvidge), impressed by Kenny’s criminal record, offers a mysterious opportunity, the jaded ex-con is confronted with a moral dilemma that risks him losing everything all over again. One of Mickey Reece’s most acerbic comedies, SUEDEHEAD’s quirky trajectory is rife with hilarious digressions and endearingly vivid characters.

T-REX (2014)
The untimely death of a local car salesman (John Selvidge) destabilizes the lives of his mother, her corrupt lawyer, a self-obsessed academic, a recovering alcoholic and several other souls in a chiaroscuro Midwestern city. Writing with John Selvidge, Mickey Reece’s knack for both the poetic and the peculiar is palpable in T-REX as he hypnotically unravels a nesting doll of Raymond Carver-esque vignettes inspired by Freud’s psychosexual stages and laced with pitch black humor and disquieting drama.