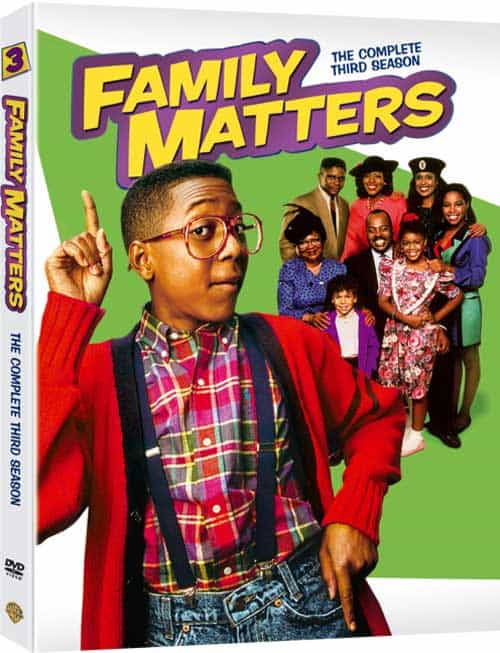 Seat42f and Warner Bros. Home Entertainment have teamed up to give FIVE lucky winners a copy of FAMILY MATTERS Season 3 on DVD. For a chance to win leave a comment below telling us why you want to add FAMILY MATTERS Season 3 to your DVD collection. Only one entry per person. Contest ends February 19th. Winners will be notified on February 20th via email so make sure to use a valid email address when you post your comment.

Get set to do the “Urkel Dance”! Warner Bros. Home Entertainment (WBHE) is bringing Season Three of the heartwarming ’90s, hit comedy Family Matters to DVD on February 12, 2013. The Winslow gang and their beloved, nerdy neighbor Steve Urkel (Jaleel White) are back to entertain viewers with this must-own set that’s sure to bring out laughs and good times. Titled Family Matters: The Complete Third Season, this DVD release will include 25 delightfully hilarious episodes and retail for $29.98 SRP. Additionally, Family Matters: The Complete Third Season will be available on digital download.

One of the most touching and memorable comedies to emerge from the 1990s, Family Matters focuses on the lives of the Winslows, a multi-generational, middle-class suburban Chicago family. In Season Three of the enormously popular series, Urkel’s irrepressible spirit, not-so-smooth moves, and undying love for Laura Winslow (Kellie Shanygne Williams) cause the family constant aggravation and occasional delight. Regardless of whether he’s building a jet pack, playing the lead in the “Romeo & Juliet” school play, or joining Carl’s poker night, the Urkman’s got what it takes to turn any situation into memorable family fun.

“Since the show first premiered, Family Matters has managed to maintain a very loyal and passionate fan base. While the show is humorous and entertaining, viewers love the show because it imparts positive messages and shares constructive values with its audience. It’s the perfect comedy to watch with the whole family,” said Rosemary Markson, WBHE Senior Vice President, TV and Special Interest Marketing. She added, “We are delighted to bring another season of this wonderful series to DVD and EST.”

Family Matters originally began airing in 1989, where it was part of ABC-TV’s Friday Night TGIF lineup, and it ended its run in 1998. The series ran for nine successful seasons and was nominated for an Emmy(r) Award in 1996.