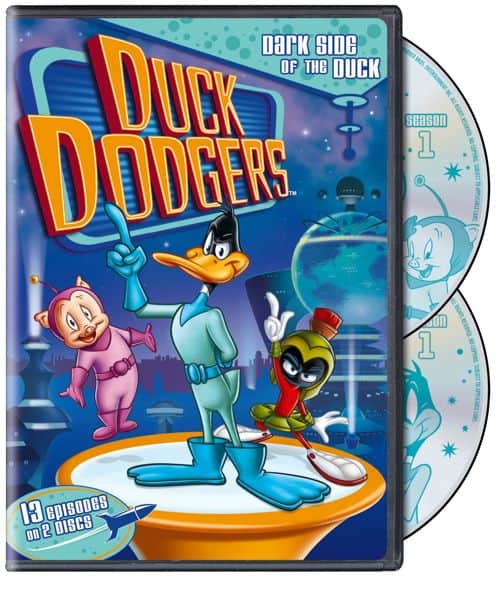 Seat42f and Warner Bros. Home Entertainment have teamed up to give FIVE lucky winners a copy of DUCK DODGERS : DARK SIDE OF THE DUCK on DVD. For a chance to win leave a comment below telling us why you want to add DUCK DODGERS : DARK SIDE OF THE DUCK to your DVD collection. Only one entry per person. Contest ends February 21st. Winners will be notified on February 22nd via email so make sure to use a valid email address when you post your comment.

DVD RELEASE DATE : February 12th, 2013
From the outer reaches of space, Warner Bros. Home Entertainment (WBHE) brings consumers a zany, intergalactic Looney Tunes treat with the release of Duck Dodgers: Dark Side of the Duck. Available on DVD for the first time February 12, 2013, Duck Dodgers: Dark Side of the Duck stars that hilarious duck, Daffy as the heroic Captain Duck Edgar Dumas Aloysius Dodgers and Porky Pig as his trusted companion, as they blast off into outer space to protect the Earth from menacing Martian invaders. This release will feature 13 madcap episodes from the series’ first season, for a total of over four hours of hilarious Looney Tunes content. Duck Dodgers: Dark Side of the Duck will retail for $19.97 SRP.Based on the original Looney Tunes theatrical cartoon short, Duck Dodgers in the 24½th Century, Duck Dodgers is the Daytime Emmy® Award-winning animated, sci-fi series that originally aired on Kids’ WB and centers on Daffy Duck, as the hero Duck Dodgers who is charged with protecting Earth from its biggest enemy, Martians. Duck Dodgers is always ready to swoop in and save the day, the planet and the galaxy – with a little luck and a lot of help, that is. He may be an intellectual featherweight but his duckbilled laser gun counts as heavy artillery. Joining him are some all-time favorite Looney Tunes characters, which make appearances in several of the series’ episodes.Duck Dodgers: Dark Side of the Duck features an out-of-this-world theme song, which is arranged by the Grammy-Award winning The Flaming Lips and is sung by the legendary Tom Jones.”Duck Dodgers: Dark Side of the Duck presents viewers with a mix of clever writing, hilarious pop culture references and beautiful animation. It’s a must-own title for any Looney Tunes fan,” said Mary Ellen Thomas, Vice President Family & Animation and Partner Brands Marketing. She added, “The episodes featured on this release will delight viewers of all ages. Kids will be excited to see some of their favorite Looney Tunes characters in space-themed adventures and adults will appreciate the witty jokes and classic sci-fi references the series offers.”
TwitterFacebookPinterestEmail