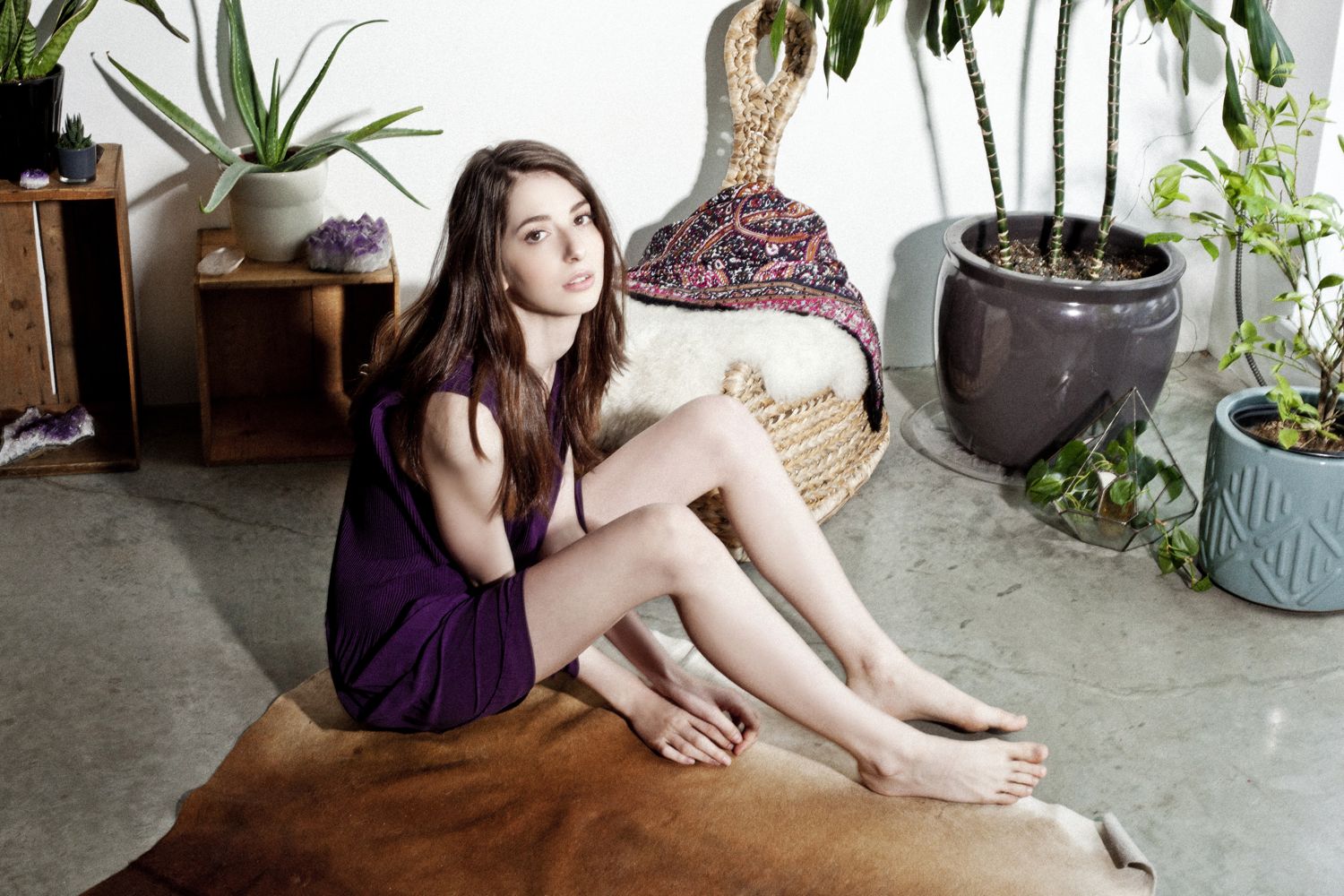 It is hard to imagine that it is possible that on a show as outrageous as Lifetime’s UnREAL that anyone could effectively steal scenes away from the likes of Shiri Appleby and Constance Zimmer, but every time she is on screen, Genevieve Buechner does just that.  Having steadfastly sharpened her acting chops on the likes of such shows as CAPRICA, FRINGE, THE KILLING, THE 100, GIRLFRIEND’S GUIDE TO DIVORCE and IZOMBIE, Genevieve has mastered the art of blending into an ensemble and yet standing out in the process.  It is to UNREAL’s credit that they have written to Genevieve’s strengths and gave her the plum role of Madison.  In an exclusive interview, Genevieve shared what she loves about her “unreal” experience in co-starring in Lifetime’s UnREAL.

What initially drew you to the role of Madison on UnREAL?
GENEVIEVE:  Originally, I felt she was very relatable because she was new at her job, always seemed to be in the way and not doing things right. Everyone I know has had at least one job where they are the bottom rung and are trying to make it work.

How would you describe your character Madison in Season 2 of UnREAL?
GENEVIEVE:  In Season 2, Madison has started to show her true colors. She’s been given this position of power and isn’t afraid to use it. However, she is still pretty naive and doesn’t quite know how being a producer works, so she’s still in the way quite a bit. But she’s learning the ropes and coming into her own.

What do you most admire about her?
GENEVIEVE:  She has a very strong drive and wants to be good at her job. I always admire people who are very driven.

How does Madison view Rachel [Shiri Appleby] and Quinn [Constance Zimmer]?
GENEVIEVE:  Quinn is this shiny, perfect and scary being to Madison and Rachel is her key to becoming part of their world. Madison can see herself more on Rachel’s level, even though she has a long way to go before she is anywhere near as good at her job. They are the two people she looks up to the most.

How does see view Chet [Craig Bierko]? Any more Madison/Chet romance upcoming in Season 2?
GENEVIEVE:  Chet is still her boss and Madison still has to be around him, but she is now so focused on being a successful producer that she’s not thinking about anything else, including Chet. But what happened between Chet and Madison is something Rachel and Quinn won’t forget.

Does Madison really love her job? And if so, why?
GENEVIEVE:  I think she just loves the idea of knowing she’s creating chaos. She loves being able to manipulate people into doing what she wants. She’s a very power-hungry person.

What for you is the funnest part of portraying Madison?
GENEVIEVE:  Despite all the dark character traits that Madison has shown, she is still a very awkward and goofy kid. Playing someone who is almost always “a deer in the headlights” is very fun. All or her added cynicism has also been a blast. I love playing the bad guy.

What are some of the funnest types of scenes to do on UnREAL?
GENEVIEVE:  Everything in the control room. Usually we get to watch the actual footage that has already been shot, so it’s almost like a little preview for us. Also those scenes tend to be full of funny little quips and comments that make everyone laugh.

Do you have a favorite “Everlasting” contestant from Season 1?  And why?
GENEVIEVE:  Probably Faith [Breeda Wool]. She was just so genuine and endearing. I felt so bad for her and always wanted to hug her.

Do you have any favorite contestants from Season 2 yet?
GENEVIEVE:  Oh that’s tough. Everyone this season has such strong stories and the actors are so amazing. But I do love the dynamic between Ruby [Denee Benton] and Beth Ann [Lindsay Musil].

Who should viewers be keeping a close eye on as Season 2 ramps up?
GENEVIEVE:  Everyone! The relationship between Quinn and Rachel is fascinating this season though.

What have your learned as an actress, and as a person, from having worked on UnREAL?
GENEVIEVE:  Sleep is for the weak! No, but seriously, I’ve had the pleasure of getting to know everyone who works on this show better and I’ve learned what amazing people they all are. They’re all inspiring.

After working on UnREAL, would you ever consider being on a reality TV show? Why or why not?
GENEVIEVE:  I’ve never considered being on one and I don’t think that’s changed. If I’m going to be on screen, I’d rather be pretending to be another person. I’m an actor, it’s what I love doing! I also don’t have any reality shows that I would be interested in being on.

Do you have any favorite reality TV shows?  Other favorite TV shows?
GENEVIEVE:  The only reality TV show I watch is RUPAUL’S DRAG RACE. The people on the show are so creative. I suppose the most real TV I watch is documentaries. I love pretty much all the shows on HBO and I just finished watching THE WALKING DEAD and now I’m onto BATTLESTAR GALACTICA. Also FIREFLY is one of my favorite shows.

You have been quite busy with your work on both UnREAL and THE 100 and the roles are very different.  What attracts you to roles like THE 100 versus UnREAL?
GENEVIEVE:  Sci-fi is a world of its own and always very fun. I enjoy working on shows set in a different time and place. The sets and wardrobe are always interesting and different. Something like UnREAL is much easier to relate to because you can easily put yourself in those positions.

We certainly miss your character Fox. What do you miss most about working on THE 100?
GENEVIEVE:  I miss her too, she was a sweetheart. There were always stunts and we had incredible sets to work with. It was always exciting to get the scripts and see what we would all be doing. I’m sad Fox is gone.

One of my all time favorite SyFy episodes was from CAPRICA “There Is A Different Sky.” Can you share a favorite moment from working on that?
GENEVIEVE:  I loved working on CAPRICA. One of the coolest experiences on set was actually being shot. I had never been in anything where my character had to be shot, so I learned all about squibs and handling weapons on set. The first time I had a squib on me, we used a sand pack instead of a blood pack so I would know what it felt like. I was so excited.

What else are you working on that you can share and talk about?
GENEVIEVE:  Right now I’m focusing on UnREAL. I did a short called “Counter Act” right before starting UnREAL and it should be out soon. I will be talking about it on social media when I know more details.

To see just what juicy and salacious adventures that Genevieve’s character Madison gets into in Season 2, be sure to tune in for all new episodes on Monday nights at 10:00 p.m. on Lifetime.  And be sure to follow Genevieve (@Genevievebue) on Twitter to find out when “Counter Act” will be released.