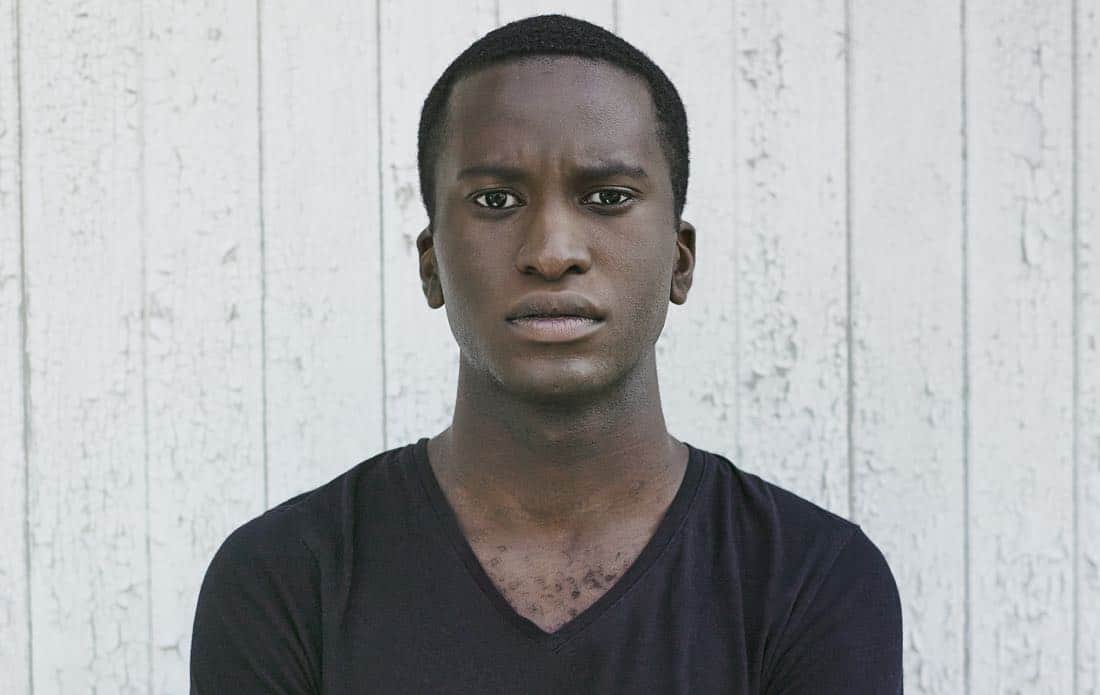 Season 2 of Fox’s drama series THE EXORCIST offered another dark tale of spiritual possession. Shining brightly through this dark season was the performance by Alex Barima as a young foster home teen, who tries desperately to protect the other young sister home teens from being targeted. In an exclusive interview, Alex talks about the appeal of this intense role and a few of the lessons he has learned honing his craft as his career expands.

What appealed to you about portraying Shelby and working on Fox’s THE EXORCIST?
ALEX: I was immediately drawn to his personality. It was great to play a character who was intelligent, intuitive and caring. We got to explore so many different aspects and dimensions of his personality throughout the season, which is something I deeply appreciated.

How would you describe who Shelby is at this point in the series and how he has grown?
ALEX: We’ve seen Shelby grow from a “curious kid” to having to face his darkest nightmares in this season. Every episode seemed to constantly test his mind, his courage and his faith, which I found very interesting. I must say he handled it all much better than I ever could! I’m looking forward to seeing the end of his journey when we come to the season finale.

What do you most admire most about Shelby?
ALEX: I love his selflessness. He never hesitates to put himself in harms way for his family’s sake.

What was it like working alongside the talented ensemble on THE EXORCIST?
ALEX: It was quite daunting, at first. This was my biggest undertaking as an actor, and I didn’t want to fall behind. I had seen the first season beforehand and was blown away by the performances. I’m happy to say that the talent of the ensemble this season was only matched by their kindness. Everyone was extremely supportive throughout the entire shoot, cast and crew alike. Many of us grew very close during the season, which made the whole experience truly memorable. I know that I’ve made lifelong friends working on this project.

What is your proudest achievement working on THE EXORCIST?
ALEX: It’s difficult to pick a single achievement. I will always look back on this entire season as a monumental achievement. I do remember breathing a heavy sigh of relief when our showrunner, Sean Crouch, came up to me during one of the earlier episodes and told me how happy he was with my work. After that, I felt infinitely more confident, and it changed the way I tackled the rest of the season.

Any favorite scenes that you can share from working on THE EXORCIST?
ALEX: My favorite scene to shoot was in episode 5, when Shelby and Verity [Brianna Hildebrand] talk about their pasts by the campfire. It was the first time we saw them connect, and it gave us a deeper understanding of their relationship. I was happy to work opposite Brianna in a vulnerable setting. She makes those scenes stand out with ease, and it’s inspiring to watch.

What has been your favorite part about working on THE EXORCIST?
ALEX: My favorite part of every day was arriving on set, looking forward to the day ahead.

What surprised you the most working on THE EXORCIST?
ALEX: I knew this was a special project for me, but I was surprised to learn the feeling was quite unanimous among my colleagues, many of which have far more experience than I do in the industry.

You also worked on SUPERNATURAL as a guest star this year. What did you enjoy about working on that show?
ALEX: Every actor in Vancouver wants to work on SUPERNATURAL, so finally getting my shot after 5 years felt great. Their crew is the most impressive I’ve seen in my TV career. It’s such a well-oiled machine, and everyone is always smiling, even after 13 seasons!

What did you take away from that acting experience on SUPERNATURAL?
ALEX: Aside from Shelby, Drexel is my favorite character I’ve played on TV. It’s the first comedic TV role I’ve gotten the freedom to explore and make my own. I hope it’s not the last we see of him.

What has surprised you most about your career so far?
ALEX: I don’t think anyone’s acting career ever goes according to “plan.” Every new opportunity is a welcome surprise! It’s always fun to look back and see where this path has taken me.

At this stage of your career, what do you think you have learned from the roles and projects you have worked on?
ALEX: I think the most important lesson is letting go. All we can do is make the most of the opportunities that are given to us. If I feel like I truly gave it my best shot, then I can move on without regrets.

Then what are the perks of where you are in your career right now?
ALEX: I have a good relationship with Vancouver casting directors, which was built over many years. Their trust is invaluable to me.

If there were one previous role you would like to revisit, which would it be and why?
ALEX: Shooting “Tomorrowland,” was the most unique film experience I’ve had. Traveling to Spain and working so closely with Brad Bird, and a world class stunt team, was a once-in-a-lifetime opportunity. It was the most physically challenging role I’ve done, but I would do it again in a heartbeat.

Do any of your characters and the situations they find themselves in ever leave a lasting impression on you?
ALEX: I usually don’t take my work home with me. I just focus on working hard in the moment and having fun.

Do you find any of you character’s habits manifesting in your own life? Like what?
ALEX: It’s probably the other way around for me. I bring some of my personality traits and mannerisms into all my characters. I don’t always do it voluntarily, but I suppose it’s natural.

Has there been any great advice you have gotten about working as an actor?
ALEX: When I started attending acting school, our director said: “I can only guarantee you this: If you quit, you’ll get nothing.” That always stuck with me.

What advice would you offer to other upcoming and aspiring actors?
ALEX: I would tell them the same thing, and add this: Focus on what makes you stand out, rather than what other people are doing.

Do you have any other upcoming projects that you can share that fans should keep an eye out for?
ALEX: The last feature film I worked on, “Public Schooled” (with Judy Greer, Daniel Doheny, and Russell Peters), was acquired for distribution recently, which is very exciting. We premiered at this year’s Toronto International Film Festival with great success, so I’m looking forward to sharing it with a much larger audience.

To see what the Season 2 finale holds in store for Shelby and the rest of the kids who are only trying to survive, be sure to tune in on Friday, December 15th at 9:00 p.m. on Fox. Then to keep up with Alex ands where his career goes, you can follow him on Twitter @AlexBarima

Preview of THE EXORCIST Season 2 finale:

Clip from THE EXORCIST penultimate episode featuring Alex as Shelby: