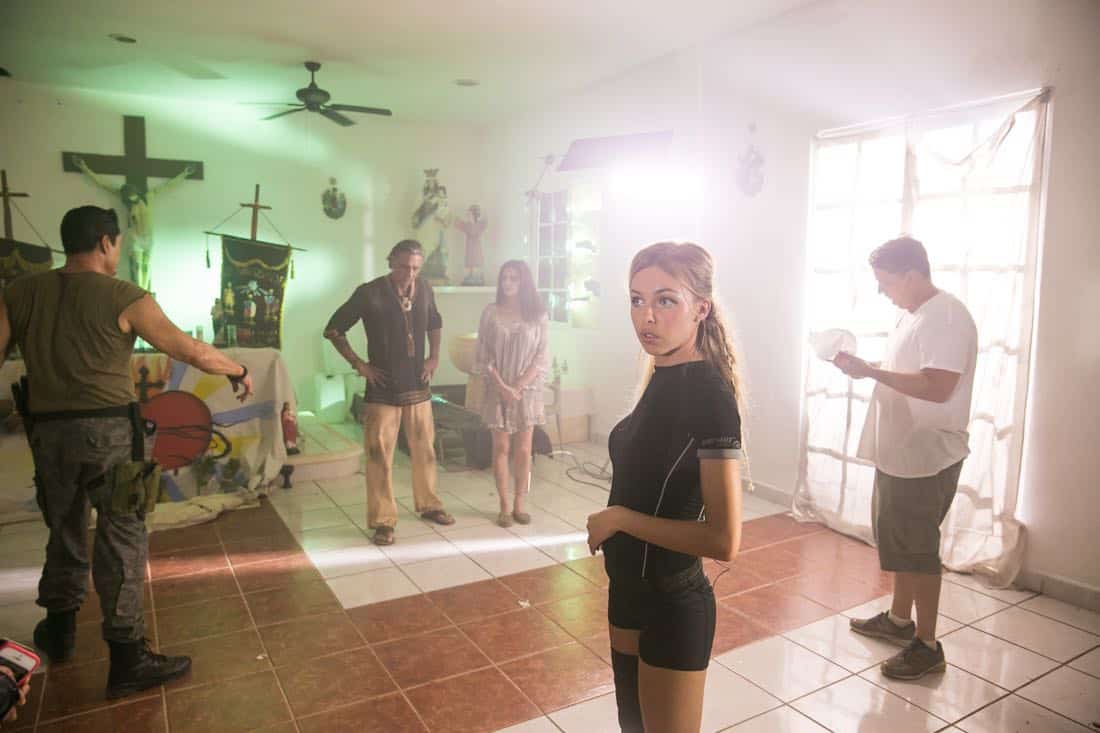 Set to break out in a big way in 2018, Natali Yura costars in the new Bruce Willis film “Reprisal.” But fans who have already discovered the young singer/actress may have seen her last year in the film “Dead Trigger” with Dolph Lundgren or her YouTube videos for her hit songs “Fall 4 U,” “Scream For Love” and “Yung Luv,” which have reached over 1 million fans across the globe. Natali’s sultry, yearning singing style and vivacious spirit makes her one to watch both as a singer and actress. In an exclusive interview, Natali talks about the great experience of working on “Reprisal” and some of the key lessons she has learned as her career as a performer continues to grow.

What appealed to you about portraying Maribel and working on “Reprisal”?
NATALI: Before I even got to know the character, I saw her description and thought “Great! A badass blonde in uniform!”

How would you describe who Maribel is?
NATALI: It took me a long time to get to know Maribel, because we seem so different. She’s a small-town girl who hadn’t really ever left home, while I’ve been traveling my whole life on business around the world. That’s why I spent so much time interviewing policemen, hotel security, and anyone else who could help me understand her motivations. I realized she chose her career because she wanted to expand her horizons, just like I do. It wasn’t enough for her to have a clerical career or work in a beauty salon – she wanted adventures. All of the law enforcement and security people I spoke to said the same thing, they wanted an adventurous life.

What do you most admire most about Maribel?
NATALI: Anyone who knows me will tell you that I’m afraid of everything…from flying in airplanes to meteor showers, so I have incredible respect for people who choose a profession knowing that they will face danger – even death – each day.

What was it like working alongside such a talented ensemble on “Reprisal”?
NATALI: Amazing! Everybody was fantastic. I worked with an incredible cast and crew. Frank Grillo, Bruce Willis, unreal. It was an invaluable experience. I got to share the set with great actors and analyze how each player is moving, reacting and responding to the script and to the action—each has their own methods and approaches. It was a great lesson, and very entertaining.

What was your favorite part about working on “Reprisal”?
NATALI: There was something interesting in every scene. I don’t want to spoil too much, but they tried to kill me – more than once, by the way! – and those action scenes are so fun and challenging. It was dream experience for any actor. All of my scenes were tough, and the results are strong.

Then, as an actor, what has been the one thing you haven taken away from the experience of working on “Reprisal”?
NATALI: This film is very important to me, because it signals my transition to a more advanced product. From the level of production to the caliber of the cast… working with such a talented ensemble helped me raise my game too. And audiences and the industry learned about an actress named Natali Yura.

You also worked on “Dead Trigger.” What did you enjoy about working on that project?
NATALI: Dead Trigger gave me the opportunity to prove myself in my first action film. I learned so much from my co-stars, producers and colleagues on-set.

What did you take away from that acting experience on “Dead Trigger”?
NATALI: I learned everything I could from the process of making a film. Also from Dolph Lundgren — he’s a true professional. I also had to handle a variety of weapons, even a grenade! Dolph gave me some great advice, which made my performance feel more authentic. Hopefully one day I can share the tips with someone else.

What has surprised you most about your career so far?
NATALI: I’ve been pleasantly surprised to see how welcoming my colleagues have been. After my first performance, everything was dream-like. People were applauding and ran up for celebratory photos! I realized I was moving in the right direction, and that I have very good people around me. It motivated me to keep working hard and keep learning.

At this stage of your career, what do you think you have learned from the roles and projects you have worked on?
NATALI: I’ve played 7 different characters over the past year and a half, which has allowed me to constantly analyze the differences between myself and my roles, helping me to better understand people in general.

Then what are the perks of where you are in your career right now?
NATALI: I’m at the beginning of my career, and have to keep building my reputation, but I have a clear vision of the path I’m on. I can also see my growing relationships with directors and colleagues who feel comfortable working with me.

If there were one previous role you would like to revisit, which would it be and why?
NATALI: So far, I’m very happy with my work. I’m focused on moving forward and what’s next. But if I had to choose, I might like a chance to revisit a Shakespeare role I played earlier in my career, or my role in the adaptation of Chekov’s “Three Sisters,” because those are such deep characters which deserve to be explored again and again.

Do any of your characters and the situations they find themselves in ever leave a lasting impression on you?
NATALI: Of course! After “Three Sisters,” I’ve caught myself saying “yes, but what?” in the voice and my character would. It was my very first movie and I really miss the team with whom I worked— Raphael De La Fuento in particular. And after “Treasure Hunter: Legend of the White Witch,” to be shooting in the jungle and to dive into grottoes and be surrounded by tarantulas… being on-location is inexpressibly thrilling.

Do you find any of you character’s habits manifesting in your own life? Like what?
NATALI: I don’t think so. I intensely analyze the motivations and behavior of my characters, but many of them are so different from me. We are very different people, so I tend to leave their habits on the set.

Has there been any great advice you have gotten about working as an actor?
NATALI: Raphael De La Fuento once told me: “Don’t do anything because of fear. When you do something under fear it won’t work. It’s better not to do it at all.” Now I always consider my decisions, and whether or not fear is influencing me. I try to face the fears head-on.

What advice would you offer to other upcoming and aspiring actors?
NATALI: Dedicate yourself to your craft and work as hard as you can. Immerse yourself in the entire process, and learn everything you can. Cast mates, production staff and directors will notice your commitment!

Then what initially drew you into the world of song and performance?
NATALI: I’ve wanted to perform since I was a child, whether on film, on stage or singing, and it became my dream career. I enjoy every step, from castings and auditions to soundtracks and being on-set with the cast and crew.

How would you describe your style of music?
NATALI: Music needs to make me feel something. I’m moved by many types of music, so I can’t name just one style. My only criterion is that I sing songs I like!

What continues to be your source of inspiration in your music?
NATALI: Personal experiences are a source of inspiration, but so are my partners. I’ve done four songs with Dan Tennenbaum, and I want to do many more! He’s a genius, and he inspires me to rise to the occasion.

What was the moment when you realize that you had finally “made it” as a performer?
NATALI: I don’t think I’ve had this moment yet—it’s yet to come! I’ve been working so much this past year, I’m just trying to take in all of the experiences.

Are you actively involved with any charities. Which charity do you work with most? And which would like to see your fans become more involved with and support?
NATALI: I’m involved in a few charitable organizations, but one that’s closest to my heart is a training program for parents who want to take in foster children. It’s so important– these people are offering children a chance at a better life. But they have very specific needs, and parents who receive the training are well-prepared when an issue arises, which might keep the children in their home and out of the foster system. We have been working hard to contribute funds for the project, it’s a passion of mine.

At a time when women’s voices are rising to be heard and respected around the country and world, what do you recommend your fans do to lend support in that endeavor?
NATALI: I think the world is changing for the better, though we still have great mountains to climb and problems to solve. We need to listen to each other. Today we’re so advanced– we can hear and see one another from across the world. But even with all of this connectivity and access to huge platforms that share your voice, not all people have the freedom of speech. There is much more to do.

Do you have any other upcoming projects that you can share that fans should keep an eye out for?
NATALI: Absolutely! I have a big project coming up, but I can’t share any details just yet. I promise to come back soon and tell you all about it!

To see Natali in her badass role as Maribel, be sure to watch for the release of “Reprisal” in theaters in 2018 and then to find out more about Natali’s upcoming film and singing projects and adventures, you can follow her through her social media at: