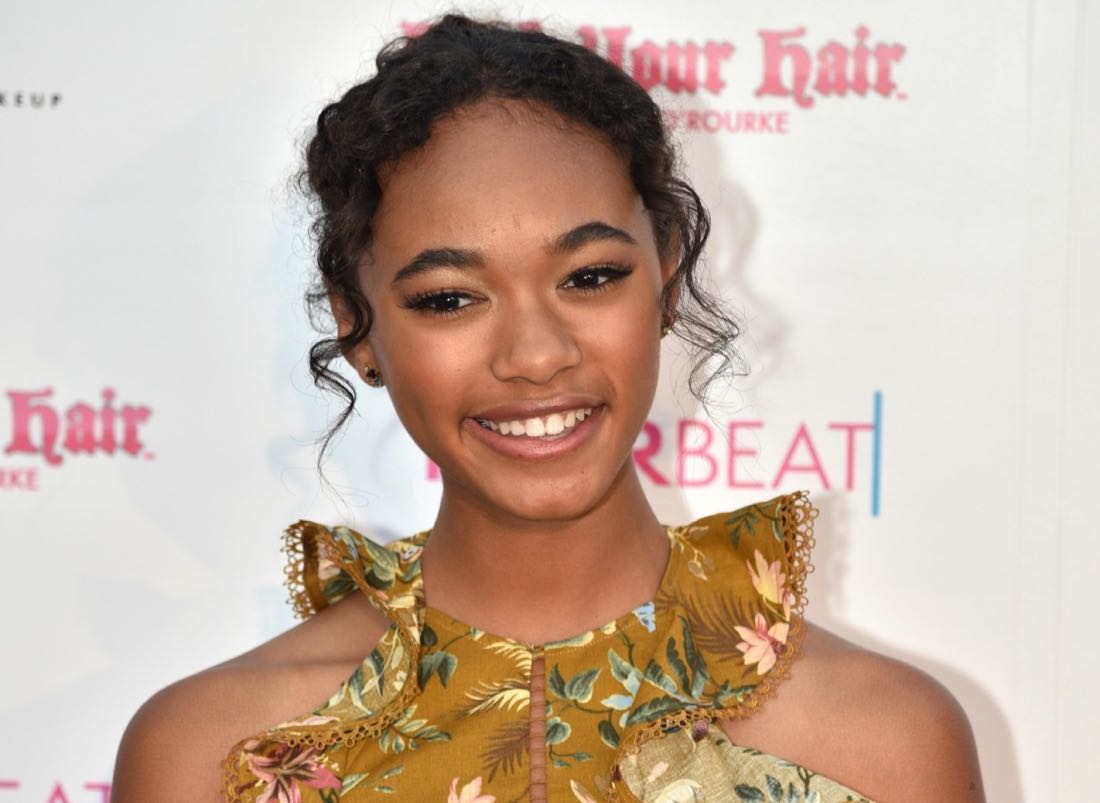 Coming in one of this Fall’s hottest new drama series is young actress Chandler Kinney, who portrays Roger Murtach’s daughter in Fox’s reboot series for LETHAL WEAPON. Chandler also currently co-stars in the Amazon Prime series “Gortimer Gibbons Life on Normal Street.” Chandler’s natural radiant energy makes her a stand out in both shows and it is a pleasure watching her career continue to grow. In an exclusive interview, Chandler Kinney talks about the fun she is having in both roles.

What drew you to the role of Riana Murtaguh and Fox’s LETHAL WEAPON?
CHANDLER: I had never seen the original movies before my audition, but of course, my mom had seen them and loved them. She told me all about the films, which made me really excited to audition for the role of Riana. She’s unlike any other character I’ve played before. I’m always looking for new ways to improve as an actor and I knew that this role would definitely provide a great acting challenge to help me grow.

How would you describe Riana? Who is she and what drives her?
CHANDLER: Riana, the daughter of Roger and Trish Murtaugh, is a typical teenager. She spends too much time on her phone and can be quite witty, “mouthy,” and rebellious. Ultimately, she wants to have experiences and try things for herself. Riana is very outgoing and has a strong desire to live life to its fullest.

What is her relationship with her parents like?
CHANDLER: Riana has a good relationship with her parents, however, they will bump heads quite a bit. Due to her somewhat defiant nature, she will find herself getting into some trouble. She is also a teen, so you can count on her to drive her parents crazy. Overall, she has a great mom and dad who love her and will be by her side to guide her as she finds her way through life.

How is it working with Damon Wayans and Keesha Sharp as Riana’s parents?
CHANDLER: Damon and Keesha are amazing to work with. There’s never a dull moment working with Damon because he’s hilarious. He’ll always throw in some improv during scenes which makes filming with him so much fun! And Keesha is so sweet and talented. She’s such a warm and friendly person, it’s delightful to be around her. We also have a lot in common so it has been really easy to bond with her. They both already feel like my part of my family and I’m so excited to get to know them even better.

What is Riana’s impression of Martin Riggs? Does she sense the lost soul inside him?
CHANDLER: Riana thinks Riggs is a very interesting character. Yes, she does sense the “lost soul” inside him but she also picks up on his vivacious spirit and fearless nature which she admires.

How familiar were you with the films that the show is based on? And how does it feel to be bringing such an iconic film series to television?
CHANDLER: When I booked the role, I finally was able to watch the films and I think they’re brilliant. It’s really exciting feeling to be bringing this popular film series to television. The films were widely known and loved for their clever comedy, heartfelt drama, and action packed scenes. Of course, our show will keep all of those elements!

What do you most admire about your character Riana? What are fans going to love about her?
CHANDLER: Riana is a bit of a wild child. She’ll be getting into all kinds of trouble! But I really admire the fact that she is fearless and so outgoing. She’ll be throwing caution to the wind. I know fans will love her, especially the younger generation that watches the show, because she’s very relatable. I think a lot of teens will be able to identify with her and understand the experiences that she’ll be facing.

What should viewers keep an eye out for as the show premieres this Fall?
CHANDLER: Viewers should be excited for Lethal Weapon this coming fall because they can expect an hour movie every week. Our show is funny, dramatic, thrilling, and full of crazy action. I’m also excited to introduce my generation to this incredible franchise and I know that they, along with original Lethal Weapon fans, will love it.

You also portray Catherine Dillman in Amazon’s “Gortimer Gibbons Life on Normal Street.” What initially drew you to that role? And what makes that a fun role for you now?
CHANDLER: I was really attracted to the role of Catherine because she is practically a genius, so I knew she would be so much fun to portray. We also have many similarities: we’re both perfectionists, passionate about our education, and have very high standards for ourselves. It’s always nice to be able to really understand a character and pull from your own experiences to use when acting.

What can viewers anticipate coming up on “Gortimer Gibbons Life on Normal Street”?
CHANDLER: Our 3rd and final season of Gortimer Gibbon’s Life on Normal Street just came out! For viewers who haven’t seen it yet, you can certainly expect many more crazy adventures and mysteries! This is probably our best and most emotional season. All the kids on the show have their own situations that they’re going through which means there is a lot of growth to take place for everyone. They also have to cope with Gortimer’s move from Normal Street into the city. It affects all the characters and the street itself. Lastly, I’m looking forward for viewers to see more of Catherine. They will get chance to learn even more about her and her life.

What do you think is the secret of your success in landing these roles?
CHANDLER: Endurance and patience is key. This is such a difficult industry. Actors are forced to face rejection all the time. It can be discouraging to not book roles, especially if you fall in love with the character or script. However, if you stick with it, stay strong, motivated, and positive, then you will have the opportunity to work on projects.

What advice can you offer other aspiring actors in reaching for their dreams?
CHANDLER: If you really love it, go for it! Like I mentioned before, it is a tough business. It’s much easier to move through the industry with a thick skin. Be prepared for anything! Be confident, and most importantly, don’t forget to have fun! I’m a big advocate for following your dreams, so if you’re goal is to become an actor, don’t let obstacles stop you from achieving your dream!

What else can you share about your career and what you are doing that your fans would enjoy knowing about you?
CHANDLER: Go check out the newest season of “Gortimer Gibbon’s Life on Normal Street” on Amazon Prime! It’s a beautiful family show about the wonders of childhood with a touch of magic. I’m also so excited to be portray Riana Murtaugh on LETHAL WEAPON! The show will be premiering on Fox on September 21st and you will not want to miss it! Lastly, I’m working hard on a new organization that I created called Chandler’s Friends. Our mission is to reach out to children who are at a disadvantage of any kind and let them know that someone cares. I’m really excited to release more details about it soon. To keep up with everything else I’m up to, you can follow me on Instagram and Twitter at @Chandlerlkinney. Thank you so much!

To see more of Chandler’s work on both LETHAL WEAPON, be sure to tune in for the premiere on September 21, 2016 on Fox and she currently be seen in “Gortimer Gibbon’s Life on Normal Street,” which is available exclusively on Amazon Prime.