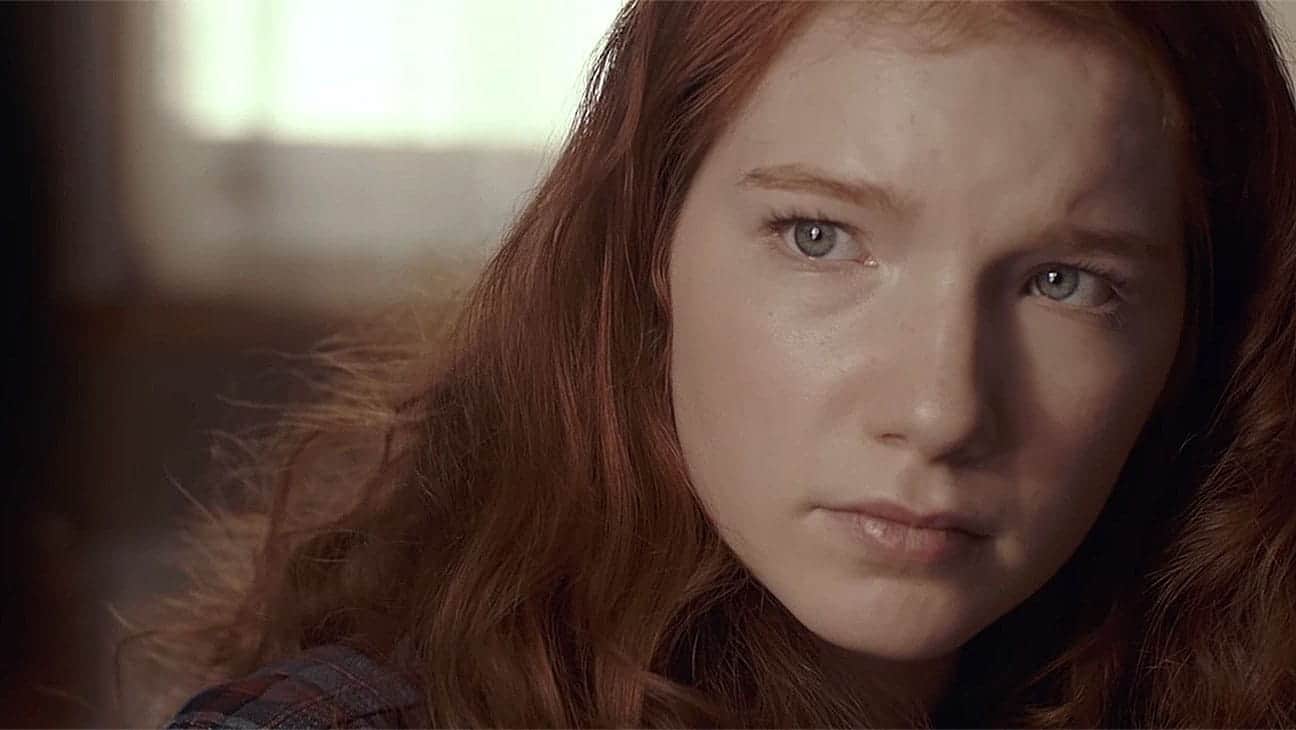 In Go90’s new digital drama series COLD, a young woman goes in search of her birth parents and discovers a horrifying secret in a remote, icy town where women have been disappearing under bone-chilling circumstances ever since her birth mother was killed and her birth father framed for it. Against the odds and the extreme, harsh elements, Ilsa Wallis (Annalise Basso) struggles to survive and evade a similar deadly fate. In an exclusive interview, star Annalise Basso talks about the experience of filming the 10-part mystery series for Go90.com.

What initially drew you to the role in COLD? And what was appealing about the show to you?
ANNALISE: The hero pursues the truth against all odds – isolation, violence, dishonesty, going to a party and not knowing anyone… In other words, the traditional female teenage experience. As Arya Stark, Hermione Granger, or Leon’s protege, Matilda, have proven, young girls can qualify as memorable, badass heroes. My character Isla Wallis has that same courage: to survive and question authority, while also being brave enough to accept the possibility that her mother’s murderer might be her own father. Her experience is kind of like high school (trying to be brave in the face of loneliness, discovering her identity as an adult, redefining her relationship with her parents, etc.), just without all the serial murders. From a creative standpoint, our director Emily Diana Ruth was super intuitive and specific about what she wanted from the project itself; but she also gave me the opportunity to collaborate with her which I super excited about.

Who do you play and how would you describe her?
ANNALISE: Isla Wallis; unstoppable, resourceful, perceptive, but also relatable. While one part of her is a socially awkward teenager, the other part is a total badass. In my real life, Isla’s confidence inspired me to embrace that part of myself. It’s funny how incapable she is in some social situations, but when she’s stranded out in the wilderness, she just clicks into survival mode and pushes herself through all obstacles.

What is your character’s relationship like with the rest of the primary characters?
ANNALISE: Isla develops an unexpected sisterly bond with a young Native American, Tina (Devery Jacobs), whose connections and confidence ultimately help Isla solve the case of her mother’s murder. Isla’s uncle Nathan (Jim True-Frost) might be the only other person who cares about Isla’s wellbeing. When she goes missing, he’s the only one who goes above and beyond to find her.The show centers around how Isla deals with isolation, so there are only so many characters with whom she interacts, but… she does have a fling with one of Tina’s friends, JJ Holden (Tanner Novlan).

What can you tease about what is coming on the show?
ANNALISE: [Laughs] More crying. More screaming. More snow.

What has been the most fun part about working on the show?
ANNALISE: Living in Los Angeles, we don’t get seasons. At all. That being said, I was so happy to trade my drought plagued desert for a Canadian winter wonderland. I got to drive a snowmobile and I learned how to curl with the cast and some of the crew (curling is pretty much human Bocce Ball on ice), but I’m most proud of my high score in the hand game “Numbers” with our prop master, Daniel Ferrara.

As a person and as an actor, what have you learned from this role?
ANNALISE: As a person and as an actor, I learned how to stay warm in below freezing temperatures (this includes an infinite amount of hand warmers, extra pairs of thick socks, and plastic bags to wrap around the feet). As a person, I was guided in the ways of proper makeup application with our makeup artist, Monik Walmsley. As an actor, I learned that once you sign the contracts, you sign away your right to do the Polar Bear Plunge (possibly because there’s a risk of heart failure… and death).

If you could offer your character some advice, what would you tell her?
ANNALISE: When you’re stealing someone’s license plate, make sure the owner of the car doesn’t see you. Car Thievery 101.

What has been some of the best advice you have gotten that you would share with other aspiring actors?
ANNALISE: Be confident in your choices; be respectful to everyone, cast and crew (when you respect other people, they give you the time and space you need in return… and trust me, you need a good amount of time and space if you’re spending the majority of your time sobbing and shrieking like a banshee for hours on end); but the most important thing is this: directors love being told what to do, how to do it, and what the story is really about. They just love it.

What are the perks of working on a show like COLD?
ANNALISE: Emily Ruth gave me the freedom to be creative, which I was seriously grateful for. She also gave me some much needed emotional support throughout the entire production. As soon as I would finish an intense scene, when my eyes would still be wet with tears or my voice all scratchy from screaming, she would come onto set and hug me or bring me a water to make sure I was okay.
I mentioned that the “COLD” family went curling. I cannot emphasize just how much of our free time was spent doing this. We were in Sudbury, Canada. Although it has that stereotypical, small-town charm, there isn’t much to do. So to pass the time, we pushed flat bowling balls around on an icy rink while trying not to kill each other. I ended up with some nasty bruises.

What other projects have you been working on that you can talk about?
ANNALISE: “Ouija 2: Origin of Evil” comes out October 21st. Just in time for Halloween! I worked on “Good Time Girls” (directed by Courtney Hoffman) over the summer alongside Laura Dern and Alia Shawkat. I just found out that it’s going to be turned into a bloody, revenge fueled Western feature soon.

What for you is the best part of being an actor in today’s world?
ANNALISE: I gain perspective with each character I play; I get to experience another life as I become another person. The more diversity and variety we explore in stories, the more places actors can go emotionally, spiritually, and creatively. Film is just heightened reality; the deeper and more fearlessly we explore it, the more we will learn and reflect on ourselves and how we relate to one another.

COLD’s 10-part online digital series premiered with Part 1 on October 13th on Go90.com. To see how Ilsa survives and if she can crack the chilling mystery before she becomes the next victim, watch for Parts 2 through 10 to debut Thursdays exclusively at Go90.com. And be sure to watch for Annalise’s next appearances in the films “Ouija 2: Origin of Evil” (premieres October 21st) and “Good Time Girls” (coming 2017).