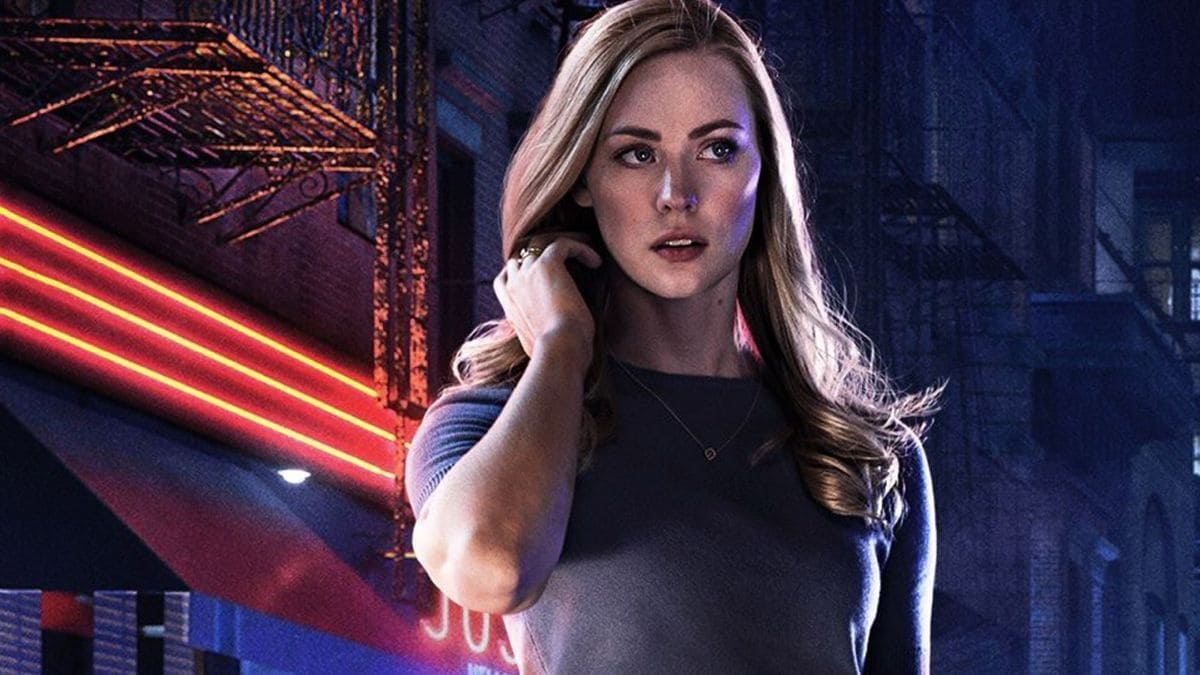 Breaking out as one of the most self-empowered women in the Marvel Universe, especially one without any super-hero or special-training abilities, the character of Karen Page, as portrayed by Deborah Ann Woll, in the Netflix drama series DAREDEVIL has been a joy to behold.  Karen Page has been embraced by female and male viewers as a woman who holds her own through sheer grit, determination, ingenuity, and unwavering bravery.  But it is Deborah’s raw and powerful portrayal that embodies the sheer resilience and humanity of the spirit of Karen that shines from the screen.  One is mesmerized just watching her.  Given the cliffhanger of where DAREDEVIL Season 2 left viewers, everyone who watched is now chomping at the bit to find out what Karen Page’s reaction will be to Matt Murdoch’s (Charlie Cox) reveal of his secret alter-ego identity known as the Devil of Hell’s Kitchen.  In a recent exclusive interview at the summer Television Critics Association tour, Deborah shared a few Season 3 teasers and what is Karen’s mindset coming out of Season 2.

I have to say, I really loved how your character Karen has really just stepped up in Season 2.
DEBORAH:    Thank you very much!  I was very, very impressed with what wrote for me and I think the stuff with Frank [Jon Bernthal] is such an amazing gift.  The idea of putting those two together is so interesting and smart and new — and that they parallel each other.  They’re much more similar than we would ever have thought, because Karen has taken that extra step that Matt won’t even take and that’s to kill another human being.  So, in a way, she is more akin to the Punisher than she is to him, or she’s somewhere stuck in the middle.  It’s a really interesting place to be.

It empowered her because it gave her a position of strength.  She was the one person that could talk to him and relate to him.  So that was a wonderful turn for the second season.  But I’m now worried about poor Karen and Foggy (Elden Henson) because they were such good friends and Foggy’s now like, “Hey, this is too much.  I’m out of here.”
DEBORAH:    Well, I mean it makes sense to me because, he was living with Matt for more years than Karen has and essentially for all of that time Matt’s been if not lying, hiding.  And that’s a really tough thing to take on.  And Matt’s going to continually put himself in harm’s way, so we’re going to deal with that over and over again.  So I can understand Foggy’s desire to break free of that.  I think Karen has more of a daredevil-side herself.  She’s attracted to adrenalin and that rush. So I think, in a way, she and Foggy differ on that.  So her reaction, we don’t know yet what her reaction is to finding out about that.  Whatever it is, it will be specific to her and not the same as with Foggy.

Have you had discussions with the writers about where the characters might go for Season 3 yet?
DEBORAH:  Well, our specific next season is so far in the future. They have to get DEFENDERS out first.  I speak with Doug [Petrie] and Marco [Ramirez] every once in a while and they’re hard at work.  [Laughs] I don’t know if I want to know, or if I’d rather sort of wait and find out when they’re ready.  Things change so much as well.

Have they approached you for appearances in some of the other spinoffs?
DEBORAH:  [Laughs] Our contracts are all like, whatever we ask you to do you try and make yourself available to do it, so there’s always that possibility.  But we’ll find out.

Should we be rooting for Matt and Karen to kind of make it, since he’s now revealed his secret identity to her?
DEBORAH:  I hope so.  I mean I love the romantic plot between Matt and Karen. But I think what’s interesting is that we’re learning about who they are separately, first.  That we tried getting them together in that second season, but it was never going to work because they were hiding half of who they were from each other.  So now Matt’s revealed, who he is but Karen revealed who she is yet.  So that’s really going to be her move, because when does she decide to tell Matt that she represents everything he hates?  So I think their relationship, whether it continues to be romantic or not, is going to be a fascinating one to live with.

To see where the journey of Karen, Matt and Foggy goes in Season 3 and what comes in the Matt-Karen romance, be sure to watch for the DAREDEVIL Season 3  premiere on Netflix “coming soon”.