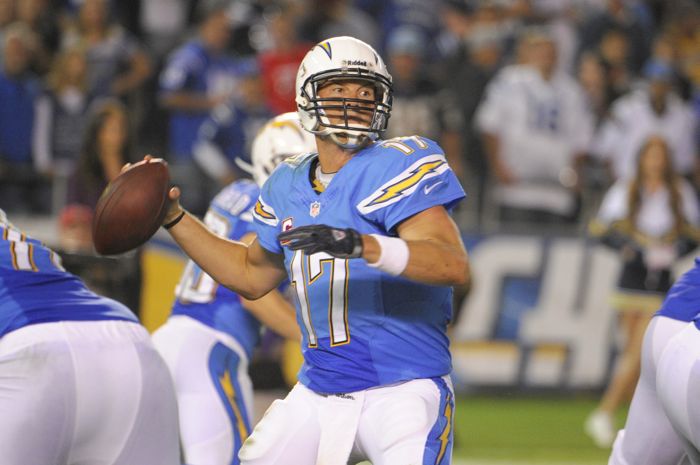 Giants vs. Lions and Chargers vs. Cardinals in Season-Opening Doubleheader on Sept. 8

· MNF rivalry renewed – The Redskins-Cowboys game on Oct. 27 at AT&T Stadium in Arlington, Texas is the 16th MNF meeting between the longtime NFC East rivals, second only to Raiders-Broncos (17 meetings).

In the opener, Eli Manning and the Giants travel to the Motor City to face Matthew Stafford and the Lions. It will be the first MNF kick-off game in Detroit since September 1971, the second year of sports television’s signature series.

In the late game, Philip Rivers and the Chargers – who advanced to the AFC Divisional Playoffs in 2014 – face Larry Fitzgerald and the Arizona Cardinals, who just missed the playoffs a year ago with a 10-6 record. The game will be played at University of Phoenix Stadium, which will host the 2015 Pro Bowl (on ESPN) and Super Bowl XLIX.

Play-by-play commentator Mike Tirico, analyst Jon Gruden and sideline reporter Lisa Salters will call the Giants vs. Lions, and the MNF games each week at 8:15 p.m. (kickoff at 8:30 p.m.). The commentators for the West Coast game will be announced at a later date.

All ESPN MNF games will be available on tablets and computers via WatchESPN. ESPN Deportes, ESPN’s 24-hour Spanish-language domestic sports network, will also continue to offer a Spanish-language production of MNF games during the 2014 NFL season. Additional MNF “game around the game” content will be available throughout the day across ESPN platforms, including the Monday Night Countdown pregame and post-game SportsCenter. The week-by-week MNF schedule:

· Sept. 8: Season-opening doubleheader – Giants at Lions and Chargers at Cardinals;

· Sept. 15: Nick Foles and the NFC East champion Philadelphia Eagles face Andrew Luck and the Indianapolis Colts, winners of the AFC South a year ago;

· Sept. 29: Alex Smith and the Kansas City Chiefs host Tom Brady and the AFC East champion New England Patriots at one of the NFL’s loudest venues, Arrowhead Stadium, in a matchup of 2013 AFC playoff teams.

· Oct. 6: Russell Wilson and the Super Bowl champion Seahawks travel to the Nation’s Capital to play Robert Griffin III and the Washington Redskins. It will be a homecoming for Wilson who grew up in Virginia, and for MNF’s Gruden, whose brother, Jay Gruden, is the first-year head coach of the Redskins.

· Oct. 13: NFC West rivals collide near the Arch when Colin Kaepernick and the San Francisco 49ers play Sam Bradford and the St. Louis Rams in a key divisional game.

· Oct. 27: One of the NFL’s best rivalries is renewed on MNF when Tony Romo and the Dallas Cowboys host Griffin, the former Baylor standout, and the Redskins in an NFC East divisional battle.

· Nov. 3: Luck and the Colts face Eli Manning and the Giants at MetLife Stadium.

· Nov. 10: Cam Newton and the NFC South champion Carolina Panthers against Foles and the Eagles in a matchup of 2013 NFC playoff teams.

· Nov. 17: Roethlisberger and the Steelers travel to the Music City to play the Tennessee Titans under new head coach Ken Whisenhunt.

· Nov. 24: Joe Flacco and the Baltimore Ravens return to the Mercedes-Benz Superdome, site of their Super Bowl XLVII victory, to play Drew Brees and the New Orleans Saints.

December: Get ready for the cold – and elite quarterbacks Ryan, Rodgers, Brees and Peyton Manning

· Dec. 1: In the first of four December MNF games in cold weather cities, the Jets host Ryan Tannehill and the Miami Dolphins in a matchup of AFC East foes.

· Dec. 15: Brees and the Saints go marching into Soldier Field in Chicago to play Cutler and the Bears.

· Dec. 22: In the MNF season-finale, NFL MVP Peyton Manning and the AFC West champion Broncos face Andy Dalton and the Cincinnati Bengals, winners of the AFC North a year ago. The game also extends Denver’s streak of 23 consecutive seasons playing on MNF (1992-present), an NFL best.

ESPN’s Monday Night Football ranked as the most-watched series on cable television for the eighth straight year in 2013, drawing six of cable’s 10 biggest audiences for the calendar year among viewers (seven of 10 among households). ESPN’s 17 MNF telecasts in 2013 averaged an 8.6 US rating, representing an average of 9,993,000 households (13,679,000 viewers – P2+) according to Nielsen. Additionally, ESPN ranked as the No. 1 network all 16 weeks for men 18-49, and 15 of 16 Monday nights last season among coveted key male demographics (men 18-34 and 25-54) and adults 18-34, while winning the night among households and viewers on eight Mondays last fall. In eight seasons on ESPN, MNF has registered five of the top 10 all-time biggest household audiences in cable history. (Only ESPN Bowl Championship Series college football telecasts since 2011 rank higher.)