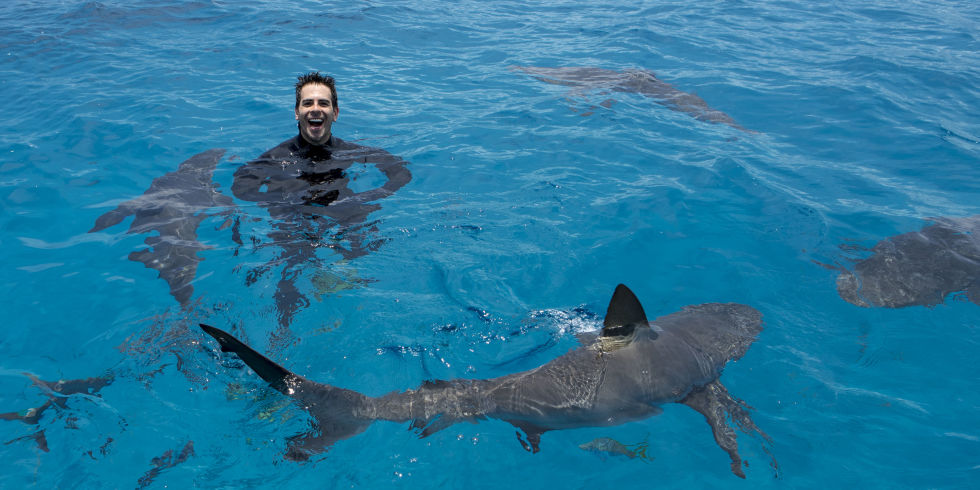 Eli Roth is back for more shark n’ awe. The award-winning film director, producer, writer and actor (“Inglourious Basterds”, “The Green Inferno,” and “Knock Knock”, amongst other projects) returns as host of SHARK WEEK’s hit late-night talk show Shark After Dark for a second year in a row. SHARK WEEK, television’s longest running and most anticipated summer event kicks off Sunday, June 26, and for five consecutive nights, Roth will bring his unique style to Shark After Dark and make his mark on SHARK WEEK with celebrity guests, shark fans and shark experts, among many others. Additionally, Roth will look back at some of the highlights from SHARK WEEK and look ahead to give viewers a sneak peek at the next day’s SHARK WEEK programs. Produced by Embassy Row, Shark After Darkairs Sunday, June 26 to Thursday, June 30 (11:00-11:30 PM ET/PT) on Discovery.

“I’m so thrilled to be back for more Shark After Dark,” said Roth. “Last year’s experience was truly life changing, and I’ve become a huge advocate for these beautiful, intelligent creatures. I look forward to diving back in the waters, literally, and to interviewing the incredible experts who are doing so much to help sharks globally. We’re going to make this the best Shark After Dark ever done, with lots of fun surprises.”

This year, Roth will also return as host of hour-long special, Shark Week Sharktactular. In this official countdown to SHARK WEEK, Roth will introduce viewers to the greatest sharks in SHARK WEEK history, fan-submitted viral videos and exclusive sneak peeks of the most jaw-dropping moments that will be featured on this year’s SHARK WEEK.

Roth wrote, directed, and produced the horror films “Cabin Fever”, “Hostel” and “Hostel: Part II”, and as an actor, co-starred in Quentin Tarantino’s “Inglorious Basterds”. His producing credits include “The Last Exorcism” and “The Man With The Iron Fists”, and he served as Executive Producer on the hit Netflix series “Hemlock Grove”. Most recently, Roth co-wrote and directed the upcoming feature film “The Green Inferno” as well as “Knock Knock” starring Keanu Reeves.