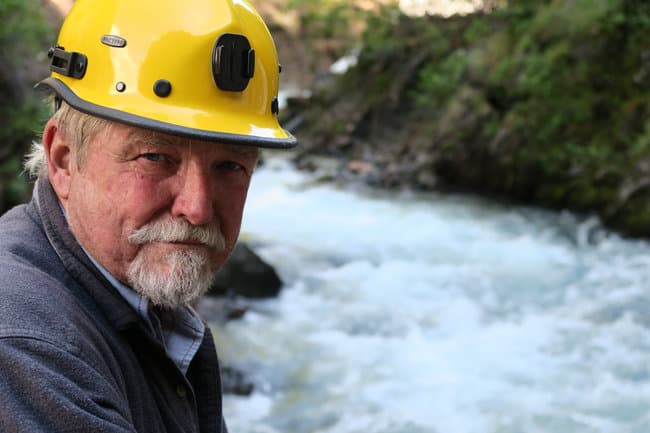 Gold miners Dakota Fred and his son Dustin are back – returning to McKinley Creek Alaska, determined to make a fortune no matter the risk. But to find the big gold payout, they’ll put their lives on the line by diving deep beneath the raging waters of one of Alaska’s wildest creeks. From the producers of GOLD RUSH, Discovery’s #1-rated show, comes an all-new series GOLD RUSH: WHITE WATER premiering Friday, January 19 at 10 PM ET/PT on Discovery.

Dakota Fred and his son Dustin are down on their luck. But the ‘Dakota Boys’ aren’t quitters. They have one last roll of the dice.

In this all-new series, the Dakota Boys put together a team of intrepid divers, mountaineers and bush mechanics to go where no miner has ever managed to explore – the depths of freezing plunge pools in white water rapids that have only recently become accessible. Nothing will stop these guys – they’ll dive in raging torrents with a six-inch suction dredge where one wrong move could have deadly consequences.

This is gold mining at its most extreme. Accessing the creek each day takes nerves of steel – traversing a death defying 400-foot canyon on a precarious zip-wire. But that is not the only danger. The guys will face wild animals, extreme temperatures and hypothermia from the freezing water.

But the Dakota boys will need to make a serious return on fellow gold miner Todd Hoffman’s investment – and soon. The pressure is on. But can the Dakota Boys tame the wilderness, strike gold and make it out unscathed?

Viewers will also be able to catch the current season, along with past seasons of GOLD RUSH: WHITE WATER, on the Discovery GO app – free with their paid TV subscription.