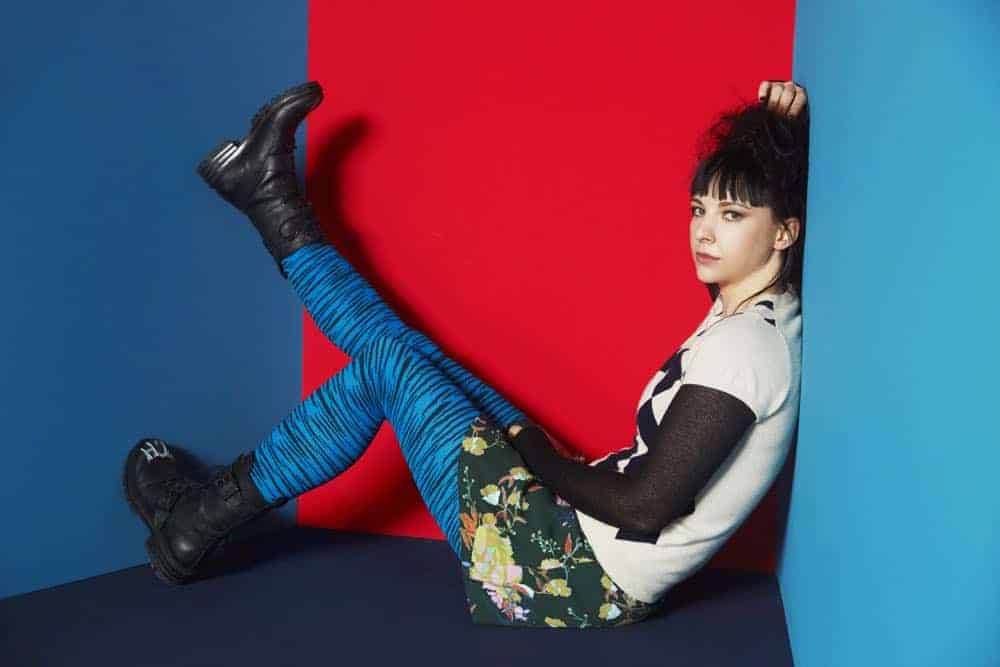 When a truly amazing role comes along it makes the heart leap and soul sing. For Erin Darke, she has had the unique luck to score two such roles in her young career, the first, co-starring in the Amazon series GOOD GIRLS REVOLT and the second, landing a co-starring role in AMC’s DIETLAND. Blessed with a keen instinct for roles that are timely as well as fascinating, Erin is a marvel to watch. In an exclusive interview, Erin previews her new role as Leeta in AMC’s DIETLAND and reflects on a few key lessons she has learned as a working actor in Hollywood.

What was the initial appeal for you about portraying Leeta and working on AMC’s DIETLAND?
ERIN: I was drawn to DIETLAND when I first read about it in the trades, because I am excited by female driven series and the subject matter is very up my alley. Then when I actually read the script, I knew I would be heartbroken if I didn’t get to play Leeta. She’s sort of a mysterious character and a bit of an oddball, but there’s something so passionate and empathetic about her and I really responded to that. I also kind of love a good oddball.

How would you describe who Leeta is in the series?
ERIN: Leeta is sort of mysterious, but she is maybe the first person who makes Plum look at herself in a different way and she’s the one who ushers Plum into the new worlds that are going to change everything for her.

What do you most admire about her?
ERIN: I think Leeta is incredibly empathetic. She is deeply effected by the pain she sees in others and desperately wants to help.

What is it like working alongside the talented ensemble on DIETLAND?
ERIN: Honestly, it’s the best. Everyone on the show is so lovely, talented and that wonderful combination of hardworking, but also fun. Everyone was also really excited to be there and working on this show. We all really believed in it, which is a wonderful place to be as a company.

How would you describe the dynamic between Leeta and Plum (Joy Nash)?
ERIN: Leeta sees something pretty immediately in Plum that she’s drawn to and she tries to make Plum see it in herself. They form a very strong bond pretty quickly.

Any favorite scenes that you can share from working on the show?
ERIN: There are a couple of scenes I love toward the end of the season (no spoilers though), but I think my favorite is the scene in episode 2 where Leeta talks to Plum and the street and tells her she deserves more than she thinks she does. That scene was actually the first one we shot in the whole season and it has a special place in my heart.

What challenges did you face working on the show and how did you overcome them?
ERIN: Honestly, my biggest challenge on this show was that I didn’t get to work enough. It’s large cast and a sprawling show, so I had more time off than I was used to. I love my job and particularly loved this job, so I kept just being like, “make me work more!”

Has DIETLAND left an impression on you in your life? If so, in what way?
ERIN: It absolutely has left an impression on me, in a few different ways. It has made me think a lot about how hard I often am on myself when it comes to things like my weight. It’s really hard in this world, but especially in this industry, to feel good about yourself and your body as a woman. I definitely had a moment when I started working on the show where I just realized I maybe need to be kinder to myself. I also had to think a lot about what life is like for fat women and the way our society treats them. The sort of socially acceptable prejudice that still persists. I think I had often been so wrapped up in my own insecurities that I hadn’t always taken in the experiences of others. I am trying to read more, listen more and be a better friend and ally.

Then as an actor, what has been the one thing you haven taken away from the experience of working on DIETLAND?
ERIN: I learn something from every job. The amazing part about this career is that you keep learning. Leeta has been a lovely lesson for me in not being afraid. Just to go for it and trust that someone will say something if you go to far.

What has surprised you most about your career so far?
ERIN: The number of shows I’ve had the opportunity to work on that I am truly passionate about! I told a friend years ago that I would be happy if I could just spend the rest of my life just working on feminist shows and somehow that has seemingly happened for the last few years. I’m not totally sure how I’ve gotten so lucky, but I hope it keeps happening!

At this stage of your career, what do you think you have learned from the roles and projects you have worked on?
ERIN: I’ve learned to embrace my weird side. If I’m being completely honest, I also learned that I am not always this industry’s very specific definition of “beautiful” and, while that’s hard sometimes, it also means that’s often opened up opportunities for more interesting and complex characters. It also means that the creative people who respond to me are usually people I deeply like and am excited to work with. I’ve grown to really appreciate that.

What did you enjoy most about working on GOOD GIRLS REVOLT?
ERIN: Oh man, I just loved working on that show. I loved the story and it felt like an important one to tell. I also just fell in love with he role of Cindy. I miss her deeply. I think I will always be a little sad that we didn’t get to make more episodes.

Then what are the perks of where you are in your career right now?
ERIN: I don’t have a “day” job! I worked really hard for a lot of years to get to this point where I can actually support myself just being an actor. There were a lot of moments where I wondered if it would ever happen and it’s still scary when a job ends and I don’t know what the next one is, but I am so grateful for this moment.

Has there been any great advice you have gotten about working as an actor?
ERIN: I’ve had the pleasure of receiving a lot of great advise over the years, but one of the best pieces I got was to stay in the moment and enjoy every bit of it when you’re working. As an actor, you can’t control how a project will turn out or how people will respond to it, so what you have is the process of making it, the people you meet and the actual work. I try very hard to just be in the moment and enjoy every second that I get to be on a set. It’s the best job in the world and I’m so privileged to get to do it.

What advice would you offer to other upcoming and aspiring actors?
ERIN: Work your ass off and always bow down to the crew. Always remember that no matter how long you’ve been there or how tired or cold you are, the crew has usually been there longer, had less sleep and aren’t being shuttled into a warm van between takes. Try to always be a person that anyone on set would want to work with again.

At a time when women’s voices are rising to be heard and respected around the country and world, what do you recommend your fans do to lend support in that endeavor?
ERIN: Keep speaking up. Talk to the men in your lives honestly about the experience of being a woman. I think for a lot of men they read these stories and it seems removed from them and, as women, we are so used to internalizing the every day sexism that can happen. I have found that it can be a really powerful thing to very honestly talk to the men you know about this stuff. Even the most “woke” of “bros” often down’t really have a concept of what women experience daily. Also, it can be really valuable to find someplace to volunteer. Even if it’s just for an afternoon. It sounds super self-less, but I have found that it can re-connect you to your voice and the world around you and is actually some of the best self-care I have experienced.

From your view point, what lessons can be learned from the “Me Too” era?
ERIN: We need to listen to women. And not just the women of Hollywood, but women of every class, race, career and orientation. If it took this long for a lot of these stories to come out about public figures who were doing such horrifying things, I cannot stop thinking about what must being happening to women in less privileged positions. I’m so happy that TimesUp is trying to address this and give all women an outlet, but we have to continue doing a better job of paying attention, listening and standing up for other women.

Do you have any other upcoming projects that you can share that fans should keep an eye out for?
ERIN: I will be back for a little bit of MARVELOUS MRS. MAISEL Season 2 and I have an indie film called “Summer ’03” coming out in September. It’s a super fun family comedy/coming of age story from a kick ass lady writer/director (Becca Gleason) and I’m excited for people to see it!

To see where the journey of Leeta and Plum takes them this season and if they become embroiled in the “Jennifer” take-downs, be sure to tune in for all new episodes of DIETLAND on Mondays at 10:00 p.m. on AMC. To get more information about the show and for sneak peaks, be sure to follow the show on Twitter @DietlandAMC. Then to see what amazing adventures Erin does as her career grows, be sure to follow her on Twitter @ErinMayaDarke.