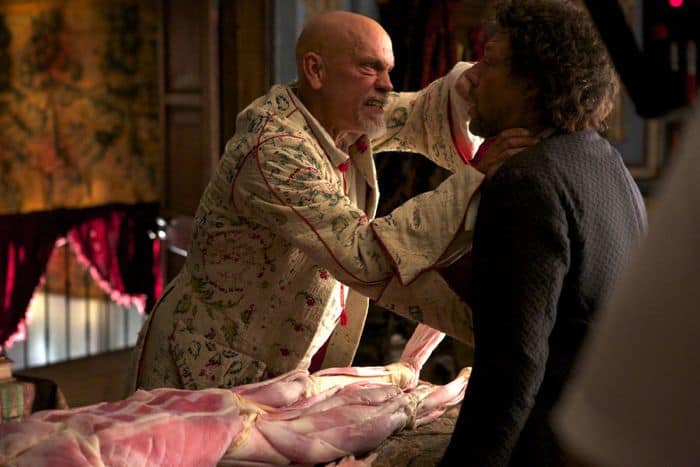 NBC’s CROSSBONES is pure summertime popcorn fun. It features the noble hero, Tom Lowe (Richard Coyle, Covert Affairs), going undercover as a doctor in an attempt to get close to and assassinate the notorious pirate, Blackbeard (the great John Malkovich). It’s a swashbuckling action adventure, a bit cheesy, a tad unrealistic, but thoroughly enjoyable.

Because CROSSBONES airs on NBC, it is at a disadvantage to its Starz competitor, Black Sails, which can show more blood, violence, and nudity. After all, this is a series about pirates, and unless one makes outlaws of the cartoonish variety, one is going to want to see some of that gritty reality, even if there’s a light spirit about. That’s just the nature of the show, and CROSSBONES has to keep these things toned down, hinting at much more than showing such elements, not getting anywhere near as bloody as the boundary-pushing NBC series Hannibal.

Yet, even so, I enjoy CROSSBONES. It could be the simplistic hero story, one that inspires and excites in the right hands. We know who is on the side of good, and we cheer for them to succeed, even if we want it drawn out a bit to enjoy the villain a little longer. Or it could be the excellent Malkovich, playing Blackbeard as an odd, thoughtful, intelligent commodore ruling an island in a way that only Malkovich can. Whatever it is, the show draws one in and captures the imagination.

Malkovich helps set the tone for the piece, distinguishing it from its peers somewhat. Because of who the actor is, Blackbeard is someone viewers are likely to feel sympathy towards, and with the uneven balance of power in a land run by those against institutions, his position is precarious and likely to change. Alliances will be formed and broken, and one is never quite sure what Blackbeard will do, his unpredictability being a positive.

In the name of fairness to the fairer sex, CROSSBONES, like Black Sails, makes sure to include plenty of women in its ensemble. There’s Selima El Sharad (Yasmine Al Massri, Carmel), who Blackbeard tasks with decoding the plans for technology captured along with Lowe, and who thinks that she knows better than the commodore. Kate (Claire Foy, White Heat) is the wife of the man Blackbeard asks to build the machine, and an obvious love interest for Lowe. And Nenna (Tracy Ifeachor, Doctor Who “The End of Time”) is a pirate henchman, pretty much on equal footing with the other pirate in the show, Charles (David Hoflin, Neighbours), both of which are not completely loyal to Blackbeard.

Should there be so many strong females in this series? Well, that’s debatable. Black Sails adds females through the inclusion of prostitutes and the capable daughter of an important man, while CROSSBONES makes the girls more part of the action. In the name of historical accuracy, the balance probably should be more male-heavy. Yet, these actresses do a fine job, and a little political correctness, as long as it doesn’t take away from the story, never hurt anything.

There’s also the obligatory scenes showing that Lowe’s boss, Governor William Jagger of Jamaica (Julian Sands (24, The Girl with the Dragon Tattoo), is not on the up-and-up. This will provide opportunity for Lowe to work with Blackbeard down the line, possibly even setting up Lowe and Blackbeard to be the only characters we really get behind, them against the world. Yet, it’s unlikely fans will care about such predictability because they will enjoy the results of the structure.

CROSSBONES is confined by limitations and light on continuity and believability. Somehow, though, it’s highly entertaining anyway, and that’s important for a network summer series. There’s enough good stuff here to make it watchable and fun, a break from the dark drama filling the airwaves September through May. That’s why it works.