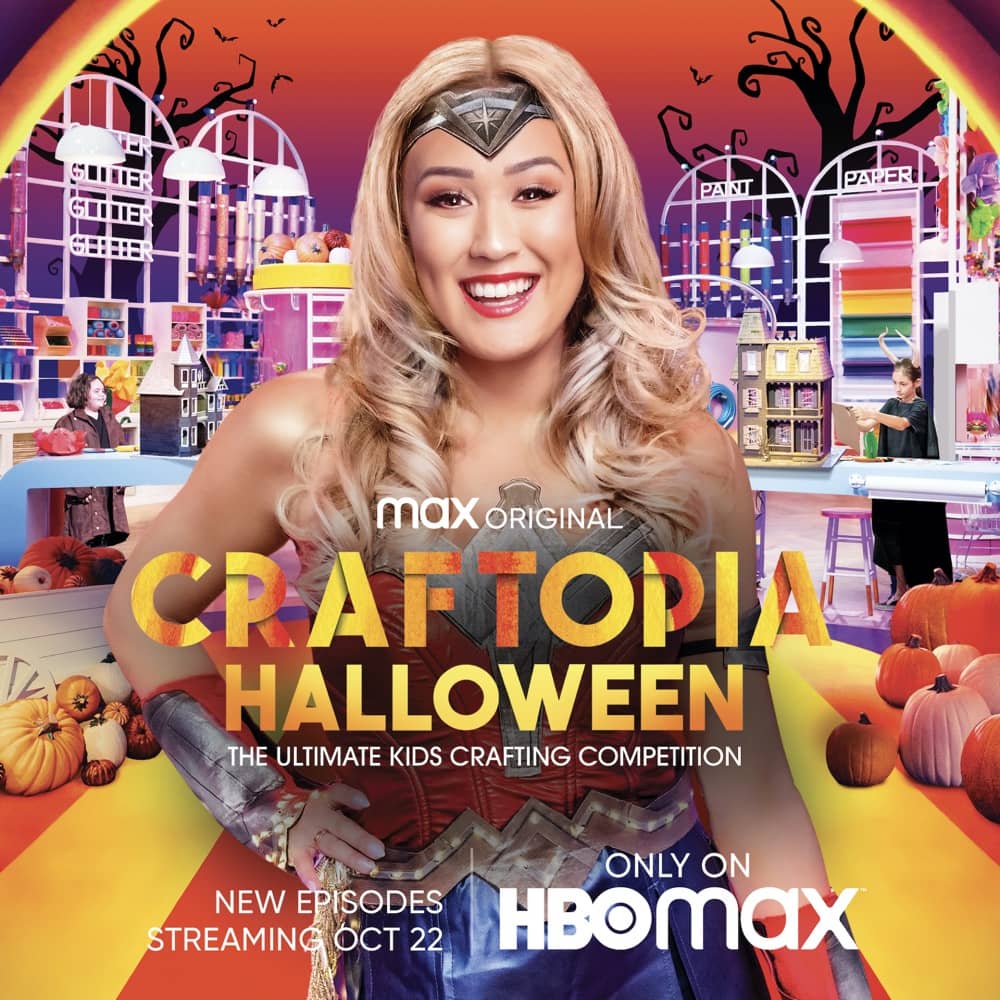 HBO Max has renewed the popular competition series “Craftopia.” Hosted and executive produced by crafting expert and YouTube sensation Lauren Riihimaki, aka LaurDIY, the 8-episode new season titled “Craftopia: Holiday Showdown” will feature adult contestants, surprise expert guests from around the country and a new crop of wildly inventive and inspiring creations and will premiere in 2021.

Additionally, HBO Max will launch four festive holiday-themed special episodes featuring the most impressive kid crafters in the country. Two Halloween episodes will drop this upcoming.October 22 followed by two winter spectaculars on November 16.. Each one will be sure to inspire and excite through crafting challenges, super special guests, and a mind-blowing holiday-themed studio set where “Craftestants” fill up their carts with an endless supply of the best materials to compete for a cash prize.

“We’re looking forward to keeping our audience’s creative juices flowing with the return of this imaginative, family-friendly show,” said Jennifer O’Connell, executive vice president original non-fiction and kids programming, HBO Max. “We are thrilled to work with Lauren and the B17 team on sparking craft ideas in homes everywhere with our upcoming specials and season two.”

“The upcoming holiday episodes are cute beyond words with talented kids that will melt your hearts,” said Riihimaki. “For season two, not only are the contestants literally bigger, so are the challenges and we’re taking everything to the next level. It’s going to be an epic ride and I’m so grateful to be part of a show that embodies everything I love about being creative.”

“Craftopia: Holiday Showdown” is executive produced by Rhett Bachner and Brien Meagher for B17 Entertainment with Claire Kosloff signed on as showrunner.

About B-17 Entertainment
B17 Entertainment, an Industrial Media company, was founded in 2013 by principals and TV veterans Rhett Bachner and Brien Meagher as a full-service production company producing breakthrough content in a variety of genres including comedy, kids, reality and game, and focuses on multi-platform programming with millennial appeal. Based in Los Angeles, the company is a key supplier of live, formatted and interactive programing for HBO Max, TNT/TBS, Quibi, Facebook Watch, YouTube and Snap to name a few. B17 Entertainment’s recent productions include “Graduation 2020” with Oprah Winfrey, “Thanks A Million” with Jennifer Lopez; “Chasing the Cure,” the live, interactive medical series for TNT/TBS; “Last Night’s Late Night with Entertainment Weekly” and “Craftopia” for HBO Max. Other credits include a trio of series for Disney including “Ultimate Sleepover” and “Ruby’s Gems” featuring Ruby Rose Turner; “Confetti US” and “Confetti Mexico;” “Make Up or Break Up” and “Help Us Get Married!” for Facebook Watch; “Nail the Look;” “Fright Club;” “WWE Show” and “Fashion 5 Ways” for Snap; “Broke Ass Gameshow” for MTV; and “Fluffy’s Food Adventures” featuring Gabriel Iglesias for FUSE.

About Lauren Riihimaki
Lauren Riihimaki, known by her stage name LaurDIY, is a leading DIY and lifestyle personality, television host and top YouTube Creator. The down-to-earth 26-year-old has become a digital sensation through her creativity and authenticity, which in turn has inspired an engaged global fanbase, especially among female Millennial and Gen Z audiences, allowing her to maintain her dominance as the premier DIY channel for over 8 years and earn recognition from the Streamy Awards for Best Lifestyle Channel. Fans come to Lauren not only for her impeccable creative sensibility, but also for her beaming sense of humor, and look to her as a beacon of positivity and role model for using creative expression to discover a path to happiness. Her vibrant personality and ability to reach a mass audience has rendered her an ideal partner for major brands, including Disney, Procter & Gamble, Starbucks, and more. Lauren’s merchandise and brand name has appeared across multiple categories including apparel, accessories, mobile accessories, stationery, jewelry and craft kits in major retailers including Target, Walmart and more. Lauren also serves as host and executive producer of HBO Max’s new competition series, “Craftopia.” Most recently, Lauren launched her podcast “Wild ‘Til 9” alongside co-host and boyfriend Jeremy Lewis. Lauren is a champion for open and honest conversations surrounding mental health and is a passionate animal lover. Originally from Toronto, Lauren currently resides in Los Angeles with her mini bull terrier Moose.