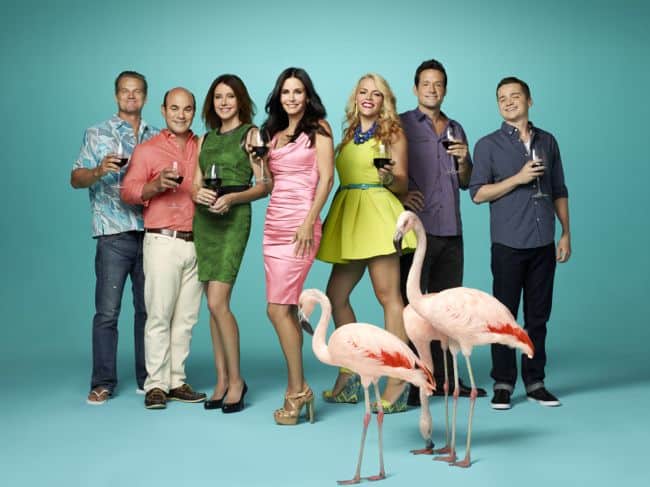 ABC’s COUGAR TOWN has a strong following and a determined staff, but sadly, that wasn’t enough to keep it on network TV. Luckily, in this modern age, there are other platforms willing to take such gems and keep them going. On January 8th at 10 p.m. ET, TBS premieres COUGAR TOWN’s fourth season.

I have been a big fan of COUGAR TOWN since mid-season one. Once the first few episodes got the titular premise out of the way, and the series settled down into a grown up version of Friends with lots of wine, it became something really special. The question is, how long can it retain this magical feeling?

Season three was helped tremendously by the amount of love and buzz. Creator Bill Lawrence and his cast traveled the country, hosting screening parties at bars on their own dime. They all took to twitter. There were web videos. Bottles of wine were shipped out. All of these things likely contributed to an aura that went beyond the television screen, and energized those who would tune in.

That does set a dangerous precedent. This year, with just a commercial or two to psych fans up, the energy felt down. Of course, one does not expect the people behind a show to keep up such a huge and expensive slate of promotion. But because it made viewers feel like a part of something, there has to be a let down when it’s over.

Which is not to say that season four is bad, by any means, but simply to explain the headspace the precedes such a viewing, and to give a warning to not build up your expectations beyond what they normally are for what is really, at its core, an enjoyable, lovely, and entertaining series.

Recently, I sat down and marathoned the first six episodes of the new run. Many of the same humorous bits were present, and the series has not lost a thing since transitioning onto cable. Each of the characters definitely retained their identities, and the story arcs progressed naturally from where they left off. Most importantly, I laughed quite a lot out loud.

However, for a reason I couldn’t quite put my finger on, the premiere, “Blue Sunday,” just felt like a little bit less than earlier seasons. Later episodes were better, for sure, especially the second one of the season. But the long-anticipated return was just slightly less than I’d hoped for. I emphasize the word slightly.

I won’t give too much away, plot-wise, but here are the basics of the initial set up. The story resumes one week after the season three finale, with Jules (Courteney Cox) and Grayson (Josh Hopkins) getting used to married life. Ellie (Christa Miller) warns Grayson that anything he does twice the first week is a precedent, and he must continue to do those same things for the rest of his life. Obviously, this isn’t a realistic expectation, and what works in one marriage won’t necessarily translate to another couple. Oh, and Jules is mad at Grayson for something he did in her dream.

Meanwhile, Travis (Dan Byrd) seeks to avoid a messy conversation with Laurie (Busy Philipps), so he takes his father, Bobby’s (Brian Van Holt), advice and runs from his problems. After all, if you don’t deal with them, they just go away, right?

The rest of the stories continue on from there. There’s plenty of relationship drama, some insight into the origins of the relationships between the various characters, and a lot of laughs based on running gags. Whether it’s Ellie approving new rules, Laurie acting the slut, Jules being a little too in love with her son, or Andy (Ian Gomez) crushing on Bobby, these things continue to just work.

I don’t know that I noticed the content turning any more adult than it already was. Sure, a title card references greater freedom on cable, and perhaps episode six goes a little bit further with a visual gag than they could have previously done on ABC. But overall, I’d say things stay pretty much the same. Which is what fans have hoped for.