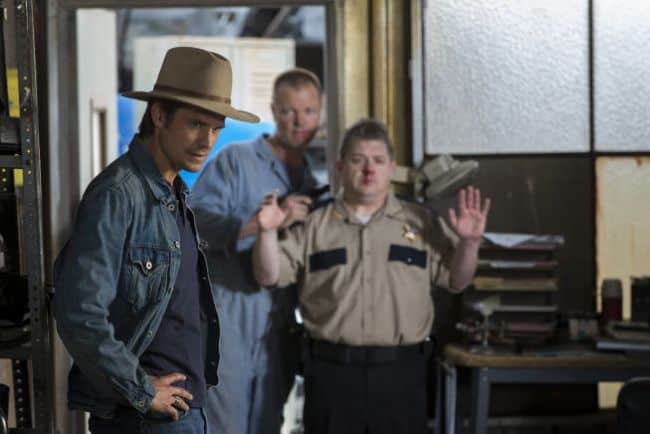 After far too long a hiatus, FX’s JUSTIFIED returns for a fourth season this Tuesday at 10 p.m. ET. Like in past years, the series holds off on showing all of its cards right off the bat, allowing viewers to adjust to where the characters are now, as well as dropping hints as to the major arc or arcs that the season will cover.

When the premiere, “Hole in the Wall,” begins, Raylan (Timothy Olyphant) is still in a relationship with Lindsey (Jenn Lyon), and skirting the law. He doesn’t now break the rules in the name of justice or love, his past weaknesses, but instead, out of selfishness. This Raylan is more of a broken man, Winona (Natalie Zea) having gone, and his father, Arlo (Raymond J. Barry), whom Raylan has never had an easy relationship with, behind bars.

Right off the bat, though, this status quo is tested. Raylan picks up a not-so-good guy as a favor, then tries to keep him locked in his trunk while dealing with a mystery that has come up at his father’s house. It’s a call back to the righteous game, which we see very quickly does not merge easily with Raylan’s current activities. Thus, by the end of “Hole in the Wall,” it is pretty clear that Raylan needs to pick one path or the other.

I love that the mystery, which will definitely be a continuing story for awhile, features a heavily involved Arlo. Arlo has only been in about half of JUSTIFIED’s episodes, but his ornery ways are highly entertaining, and the way he shakes up Raylan’s calm demeanor, pushing his son’s buttons, makes for great television. Any way to bring Arlo more central does risk his continued presence, as death comes to many a villain on JUSTIFIED, but it also means that this season will have to be as fantastic as the others have been.

Raylan gets to step up and again be the man that fans love in this very first episode of the season. He may begin the episode on shaky ground, but despite his many flaws, Raylan Givens is a hero, and one of the genuinely coolest ones on television today. The way he handles negotiations, and faces down the bad guys, is unparalleled, and viewers are treated to some examples of classic Raylan almost right away in this installment.

Raylan’s restoration is also helped along by the crooks that come into Raylan’s circle. Cast lists are not yet available for the episode, making it hard to pinpoint who all of the performers are, but there is a young couple, as well as Raylan’s hostage, each of which contributes something interesting to the episode. Add to that, Raylan’s new cop buddy, Bob, played by the great Patton Oswalt, and “Hole in the Wall” serves as a satisfying return.

Lest one worry about the other important gang on the show, there is also plenty of Boyd (Walton Goggins) in “Hole in the Wall,” too, still being aided by Ava (Joelle Carter) and Johnny (David Meunier), as well as a new, unstable, very dangerous man. They will definitely be involved in whatever Raylan is getting himself into, but they also have their own stories, as Boyd continues his criminal enterprises.

These include running drugs, of course, and also the prostitution trailers that Boyd has taken over. The whores actually figure importantly into the first episode, when Ellen May (Abby Miller) makes a big mistake. Boyd uses this mistake to his advantage, of course, and will quickly expand his plot to encompass others, which should build up nicely over the next few weeks, eventually bringing them all back into conflict with Raylan and the law.

At some point, the balance that has kept Boyd in business while Raylan looks the other way will have to be broken. It may not be until the final season of the series, but something will draw enough attention to Boyd that he will have to be shut down. Until that day, he continues to be a fantastic character to have around, and the way that he manages to still do what he wants, and keep some kind of peace with Raylan, is a real draw of the series.

JUSTIFIED’s newest episode has everything one wants in the Western-influenced series. There are gun fights, show downs, boob flashing, drinking, conversations behind bars, at least one bad-ass killing, and some of the finest acting being done anywhere. Fans should not be disappointed, and if you’ve only been considering getting into the series, “Hole in the Wall” could serve as an enticing entry point.