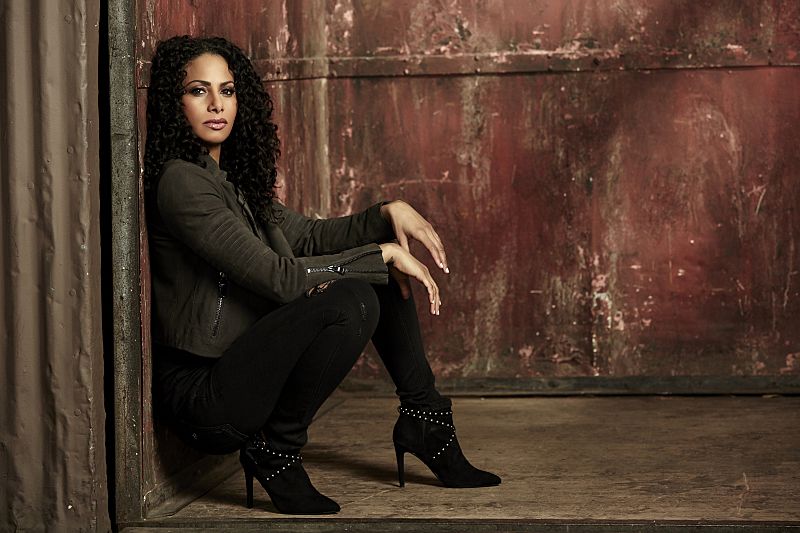 In an exclusive interview, star Christina Moses talks about the challenges that would be faced and the strain on each person’s personal relationships when faced with the terror and uncertainty of a viral outbreak.

What drew you to the show?
CHRISTINA: I love the show because it could happen.  The terrifying aspect of that, I find titillating.  It’s scary.  Scary in a good way — as an actress, a story teller.  But also just the relationships, the human stories of love and friendship, and who you think you are versus who you become in the face of tragedy, chaos, and horror.  Just the gray areas of human nature, and in the changing nature of our humanity.  That’s what drew me to the story.

Your character Jana Mayfield, why don’t you describe a little about who she is and what she’s going to face as she goes through the season.
CHRISTINA: She’s a data recovery specialist.  She has done very well for herself.  She has a very safe, structured life.  This is very important to her because she grew up in chaos, growing up in group homes.  She never had a home, a family, so she needs that structure.  We see her go from being very safe in that world that she’s created for herself at the time, trying to love and create family intimacy with an incredible man who she loves very much.  It’s hard that is for her, how she’s still very afraid of that.  Her coming through to the very end, we don’t know if they are ever going to be together again.  But at least in her heart, she’s known that this is what she wants.  Solitude is her safe place.  At the very end, we see her realize that she needs people in order to stay alive.  She’s great at staying alive on her own.  She’s very good at keeping people at arm’s length.  She has very protective instincts.  She protected Suzy (Nadine Lewington) growing up.  She would definitely put people before her, but if she doesn’t have to, she’d rather not.  It’s way too intimate.  It’s way too vulnerable for her.

What’s her attraction to cops?  She’s now dated two that we know of.
CHRISTINA: (Laughs)  I know, right?  She has a type.  I think that there’s some sort of authority thing with her.  A little bit of “conquering authority”, maybe, that she was afraid of growing up.  But with Lex, it’s that he was able to open her heart in a way that no one was able to before.

Assuming that they can get back to each other at some point, do you think that she’s going to be ready to move forward with their life together?
CHRISTINA: Definitely.

She will have figured that out at that point?
CHRISTINA: I think she was ready to do that before.  Then all of a sudden, at the last minute, there’s the quarantine and she had just made up her mind to do that finally.  She wants to follow through with that.

Are we going to get to see more scenes of them getting together again at some point?  Or is that too big of a spoiler?
CHRISTINA: It’s a spoiler.  But there is no one in or no one out, so…

They are fairly close, whether they’re separated by a big barrier or not? They are not that far away.  What is Jana going to do?
CHRISTINA: She’s a very intelligent woman.  She’s got a lot of resources at her fingertips.  We see that she’s going to try and create tools to actually communicate and to do more from inside the quarantine.  What is she going to be exploring to contribute to help things out?  Without saying too much, you will definitely see her use her brain and her hacking abilities, her computer savyiness.  She’s got the right skills.

I was also surprised how quickly things seemed to go to pieces after the initial outbreak without that authority figure in the quarantine, without someone to hold things together, and everyone just starts to lose it as the panic sets in.  How is Jana going to confront that aspect?  How is she going to deal with people freaking out, especially since she is a more thought out analytical type of person?
CHRISTINA: Jana has her moments where she is really confronted, where she gives in to her own fear and panic.  Again, what happens is that other people become more important.  Making sure that other people are safe becomes bigger than her own fears, which is something that’s fairly new to her.  When she is faced with something, her initial instinct is to be protective.  She would rather than go there, to just go away.  Then she realizes that she needs people and that the more “we can all work together, we can increase our odds of actually surviving.”

This is a show, of course, called CONTAINMENT and is about a viral outbreak.  What have you learned about viral outbreaks that you are now trying to use in your own life?
CHRISTINA: I’m not using them, but, it’s definitely important to wash your hands.  I’ve become very aware of who touches my cup and who hands me my cup.  That is important in our show.  That could pass disease along if there’s sweat on their hands or anything.  I am aware of it.  I don’t really change my behavior because of it, but I am very, very aware.  It definitely reinforced the idea that I need some sort of evacuation plan.  Especially living in Los Angeles, in California, where we are running out of water.  I need to have water in my home. (Laughs)  Eventually, hopefully sooner, rather than later, I will do something about it.

Maybe you could just talk about Jana’s relationships with both Lex (David Gyasi) and Jake (Chris Wood).  Obviously, one is a strong friendship and one’s a strong romance.  Can you comment on that?
CHRISTINA: Her relationship with Jake is that they are both so similar.  They both are emotionally unavailable, especially when they met.  That’s their arc.  That’s their scene.  When they met, they were both into having a good time, not getting in too deep.  It’s just something they couldn’t offer and they both recognized that in each other.  It would never have worked anyway.  They just stayed friends.  By the time we meet them in the show, there’s definitely a lot of love there that you will see, like a sibling type of feel.  They are able to call each other out on their stuff, which is good.   Jake understands that what she and Lex have is the “real deal.”  Probably, somewhere deep down inside, Jake wants that and he is able to potentially have that with Katie (Kristen Gutoskie). Her relationship with Lex is that they both ground each other.  They open each other up in a way that no one else has ever been able to before.  For her, that’s huge.

We see her desperately, when the communication source gets cut off, trying to contact and reach him.  That’s probably one of the most beautiful aspects that I saw — that desire to communicate and reach out and reassure the other person that you love them so much.  Was it her one big goal to reach out and communicate with him?
CHRISTINA: Yeah, it’s to tell him that she loves him.  She wants to find out what’s going on.  She knows something is not quite adding up.  She sees it in his face.  So she needs to know.  For someone like Jana, the more information she has, the better it is.

And how quickly with the story develop beyond the initial episodes.  Will we see everything happen in a “day’s span”, a “week’s span”?
CHRISTINA: A day, two day.    The show takes place total over about 18 days. Things are moving pretty fast.

To see if Lex and Jana’s love story gets a joyous reunion and happy ending at the end of those fateful and deadly18 days, be sure to tune in for the premiere of CONTAINMENT on Tuesday, April 19th at 9:00 p.m. on the CW.