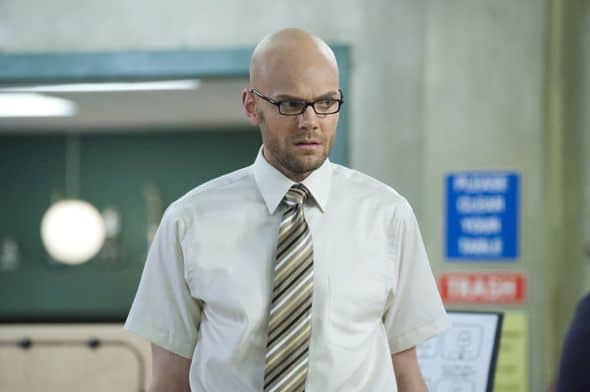 COMMUNITY Season 3 Episode 8 Documentary Filmmaking Redux Photos : DEAN PELTON DIRECTS EVERYONE IN A COMMERCIAL FOR GREENDALE AND THE POWER OF BEING BEHIND THE CAMERA GOES TO HIS HEAD – LUIS GUZMAN GUEST STARS – When the school board asks Dean Pelton (Jim Rash) to make a new commercial for the school, he enlists the study group to star in his production. As he gets swept away with the project, more of the student body is pulled into the fray, including Magnitude (Luke Youngblood), Fat Neil (Charley Koontz), Garrett (Erik Charles Nielsen), Leonard (Richard Erdman), Star-Burns (Dino Stamatopoulos) and even Greendale alum and genuine celebrity, Luis Guzman (“How to Make it in America”). Meanwhile, Abed (Danny Pudi) films all the activities for a documentary. Joel McHale, Chevy Chase, Alison Brie, Gillian Jacobs, Yvette Nicole Brown and Donald Glover also star.