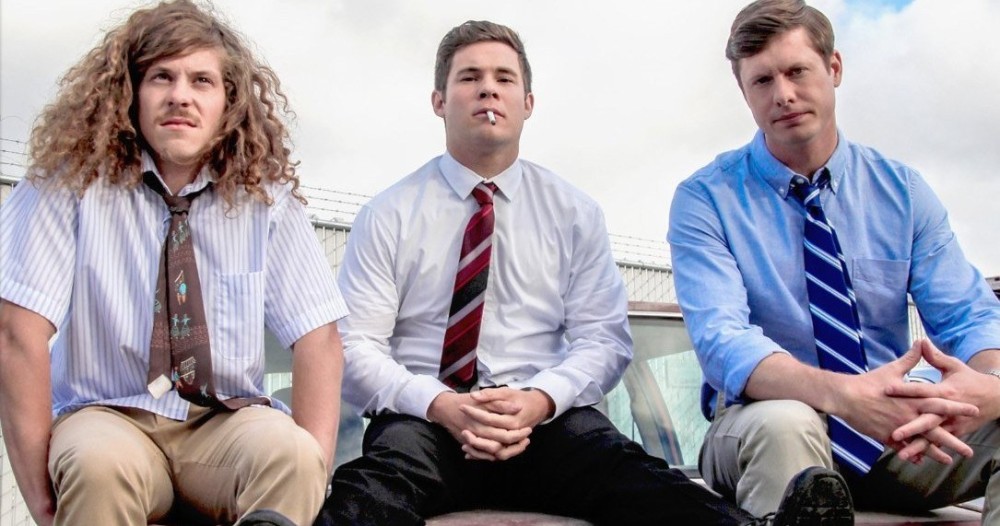 It’s the most wonderful time of the year on Comedy Central. The new year is highlighted by the series premieres of “Idiotsitter,” which follows a filthy rich, young woman whose wild lifestyle has landed her under house arrest and a down-on-her-luck Harvard grad who has to work as her court-mandated guardian, and “Not Safe w/ Nikki Glaser,” in which the self-proclaimed “curious perv” hosts a place for comics to joke, learn, and share their personal stories about sex and relationships through panel discussions, field pieces, and social experiments. The coming months also promise new seasons of “Adam Devine’s House Party,” “Broad City,” “This Is Not Happening,” “Tosh.0” and “Workaholics.”

Adam, Blake and Ders are back to work at TelAmeriCorp in the sixth season of “Workaholics.” From the minds of the hilarious and irreverent Internet sketch group Mail Order Comedy, “Workaholics” is a single-camera comedy featuring three friends, played by series creators Blake Anderson, Adam Devine and Anders Holm, who work together from 9 to 5, live together from 5 to 9 and party together 24/7. Dress codes, deadlines and waking up before noon are not things these guys are used to. They do their jobs and sometimes they even do them well, but they show up late, leave drunk and always live for the day… even if they don’t know what day it is. This season the guys, along with officemates “Jillian” (Jillian Bell) “Alice” (Maribeth Monroe) and “Montez” (Erik Griffin), and their friend “Karl” (Kyle Newacheck, creator and director), sell a new product geared toward women, seek out an old favorite porn video, fight to raise their klout scores and “Blake” and “Jillian” adopt a cat, among other hijinks.

Created by Jillian Bell (“Workaholics,” “The Night Before”) and Charlotte Newhouse (“The Big Bang Theory“), the weekly, half-hour “Idiotsitter” follows “Billie” (Newhouse), a cash-strapped, straight and narrow Ivy League grad hired to babysit “Gene” (Bell), an heiress who is under house arrest in her daddy’s mansion. The ten-episode season also features Stephen Root (“Boardwalk Empire”) as Gene’s permissive and oblivious dad and Jennifer Elise Cox (“The Brady Bunch Movie,” “Web Therapy”) as her stepmother. “Idiotsitter” is the second digital series produced for cc.com to make the transition from digital to on-air, following “This Is Not Happening.”

The infinite world of the Internet is a comedic playing field for host Daniel Tosh as he explores the online exploits from around the world. Tune in this February for the eighth season of “Tosh.0? to find out what fresh look he will reveal to the masses and meet the new recipients of “Web Redemptions.” The eighth season of thirty episodes will be split into three sets of ten episodes each.

Self-proclaimed “curious perv” Nikki Glaser knows you’re having sex… and she wants to hear all about it. “Not Safe w/ Nikki Glaser” is a place for comics to joke, learn, and share their personal stories about sex and relationships. It’s a fun, frank, fast-paced show with panel discussion, field pieces, and social experiments that is equal parts hilarious and titillating. “Not Safe w/ Nikki Glaser” is the destination to learn, ogle, and laugh about all things sex – because that HBO rerun of “Real Sex 17” just isn’t cutting it anymore. “Not Safe w/ Nikki Glaser” is the first Comedy Central series to be introduced and developed across multiple social platforms before its launch on the channel. Viewers can presently watch episodes from her hit original series “Quickie w/ Nikki” Tuesdays on Comedy Central on Snapchat Discover and also follow her and the show on Twitter and Instagram.

“Broad City” is coming back with a new season of ten episodes that will see Abbi and Ilana dealing with a slew of everyday challenges and adventures as they live their lives in New York City, including a trip to the DMV, a rat in the apartment, going clubbing, taking on new job responsibilities, visiting Abbi’s dad and new hook ups.

“This Is Not Happening” returns for season two with eight episodes featuring Ari Shaffir and his comedian friends telling hilarious and true stories in front of a live audience at Cheetahs in Hollywood. Comedians including Jim Breuer, Nicole Byer, Felipe Esparza, Moshe Kasher, Kyle Kinane, Artie Lange, Al Madrigal, Randall Park, Henry Rollins, Nick Swardson and Ron White tell their favorite, most embarrassing, or just plain funniest true-life tales. Each episode features a custom opening that puts Shaffir into a ludicrous situation, dreamed (nightmared) up by director Jeff Tomsic. “This Is Not Happening” originally debuted as a digital series on cc.com and the site continues to feature exclusive digital stories throughout the run of new episodes.

Starring and curated by Adam Devine (“Workaholics”), “Adam Devine’s House Party” returns for a ten-episode third season and shows what happens when Devine is given a massive budget and free reign to plan an epic party. Last season he bought a bar in New Orleans for an incredible, ten-episode bash, complete with party shenanigans and all-new stand-up sets from some of his favorite comic friends. Every episode of “House Party” mixes scripted storylines with real stand-up, and features an exciting lineup of comedy favorites, as well as up-and-coming talent.

Nikki Glaser’s weekly series continues with all-new Snaps showcasing her playful and unapologetic look at sex, leading up to the premiere of her Comedy Central series “Not Safe w/ Nikki Glaser.”

“Swag-A-Saurus,” starring “hood adjacent” comedian James Davis, returns to give viewers a weekly lesson about some of today’s hottest slang, including THOT, F*ckboy, and “Netflix and Chill.” Each week, Davis breaks down a term from the slang lexicon in hilarious fashion, enlightening fans to what they’ve been pretending to know all along.