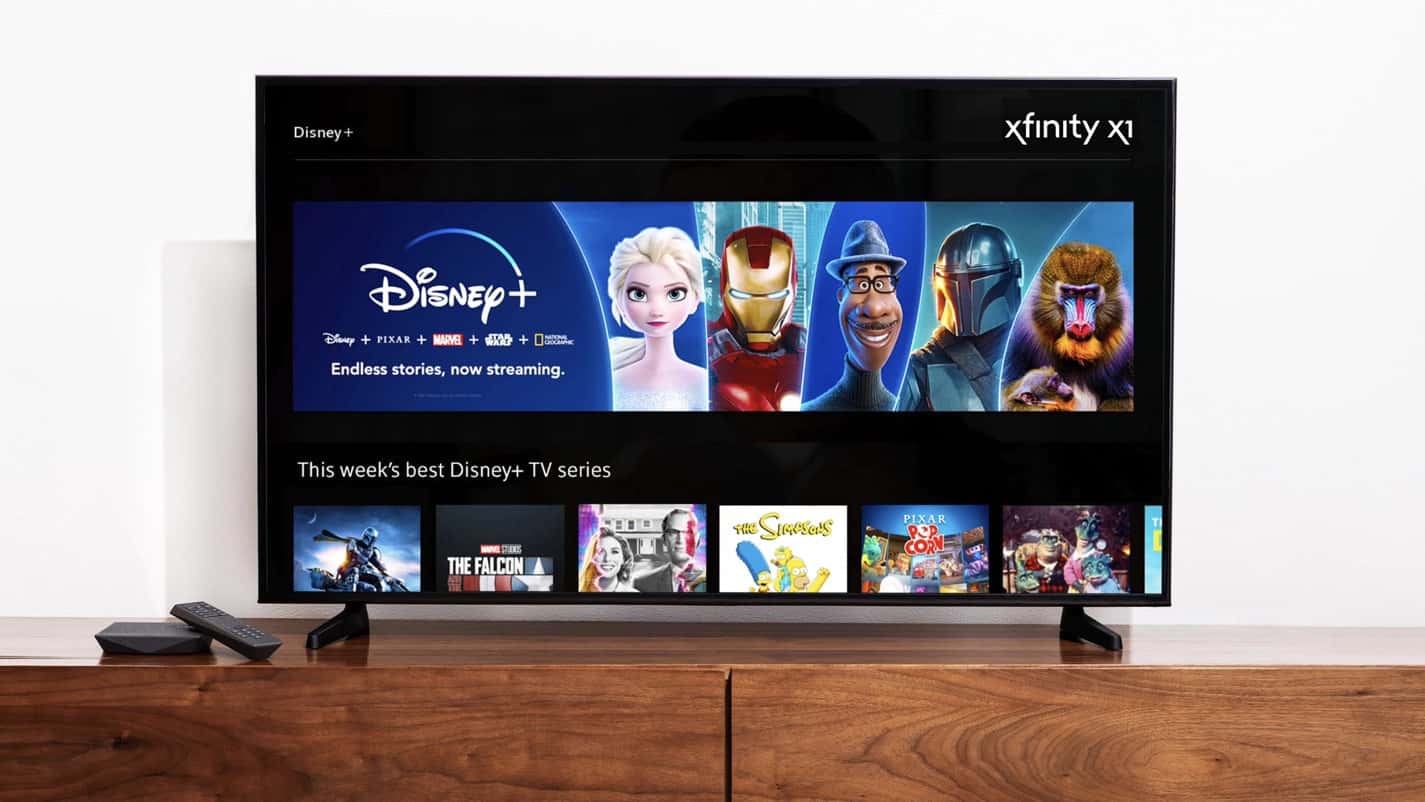 Comcast and The Walt Disney Company today announced the start of the rollout of Disney+ and ESPN+ on Xfinity, giving X1 and Flex customers access to the Disney+ library of movies and shows from Disney, Pixar, Marvel, Star Wars, and National Geographic, along with thousands of live sports events and original programming from ESPN+.

The launch means in the coming days tens of millions of customers will soon have access to Disney+ in an easy-to-use, state-of-the-art user interface that provides access to the best entertainment, just in time to enjoy the newly released series Marvel Studios’ “The Falcon and The Winter Soldier,” “The Mighty Ducks: Game Changers,” and upcoming series “Big Shot,” premiering April 16, and “Secrets of the Whales,” premiering April 22.

Additionally, ESPN+ is now available to Flex customers via the ESPN app, with plans to launch on X1 in the coming weeks. ESPN+ programming includes over 10,000 live sports events including exclusive UFC events, hundreds of MLB games, Golf (coverage from PGA Tour, The Masters and PGA Championship), an incredible lineup of international and domestic soccer (including the FA Cup, Bundesliga, Serie A, MLS, Copa Del Rey and more), college sports from 20 conferences, boxing and much more. ESPN+ also features exclusive ESPN+ Originals and signature studio shows like “Stephen A’s World,” “SportsNation” and “Peyton’s Places” – plus exclusive access to the entire library of ESPN’s award-winning “30 for 30” documentary films and more.

X1 and Flex customers can access Disney+ or ESPN+ by saying “Disney+” or “ESPN+” into the Xfinity Voice Remote or by saying the name of a desired title from one of the streaming services (like, “The Falcon and The Winter Soldier” or “Stephen A’s World”). Xfinity customers will also be able to find the Disney+ and ESPN+ content libraries integrated throughout their user experience, including in collections such as “TV,” Movies,” “Sports” and more.

“With the launch of Disney+ and ESPN+, our X1 and Flex customers will now be able to enjoy all the best entertainment from today’s most popular streaming services on one device that makes it easy for them to find their favorite programming, or discover something new,” said Rebecca Heap, Senior Vice President, Video and Entertainment, Comcast Cable.

“The launch of Disney+ and ESPN+ on Comcast’s Xfinity platforms comes at an opportune time with the new Disney+ Original series from Marvel Studios ‘The Falcon and The Winter Soldier’ in full swing, the return of Coach Gordon Bombay in a new series ‘The Mighty Ducks: Game Changers,’ and “Secrets of the Whales” from National Geographic premiering on Earth Day. It will be a big April on ESPN+ too with UFC 261, the start of MLB and MLS seasons, The Masters, and more,” said Michael Paull, President, Disney+ and ESPN+.

Xfinity delivers all the best entertainment to customers via its X1 and Flex devices and through its leading Xfinity Internet service. X1 provides the most comprehensive library of entertainment on one platform with thousands of choices – aggregating live TV, On Demand, and all the best apps. Xfinity Flex is a 4K streaming device included with Xfinity Internet that extends the best features of X1 to customers who prefer a streaming experience, with all the favorite video and music apps, as well as the ability to manage Xfinity WiFi, mobile, security and automation services – all controllable with the award-winning Xfinity Voice Remote.

About The Walt Disney Company

The Walt Disney Company, together with its subsidiaries and affiliates, is a leading diversified international family entertainment and media enterprise that includes Disney Parks, Experiences and Products; Media & Entertainment Distribution; and three content groups—Studios, General Entertainment and Sports—focused on developing and producing content for DTC, theatrical and linear platforms. Disney is a Dow 30 company and had annual revenues of $65.4 billion in its Fiscal Year 2020.