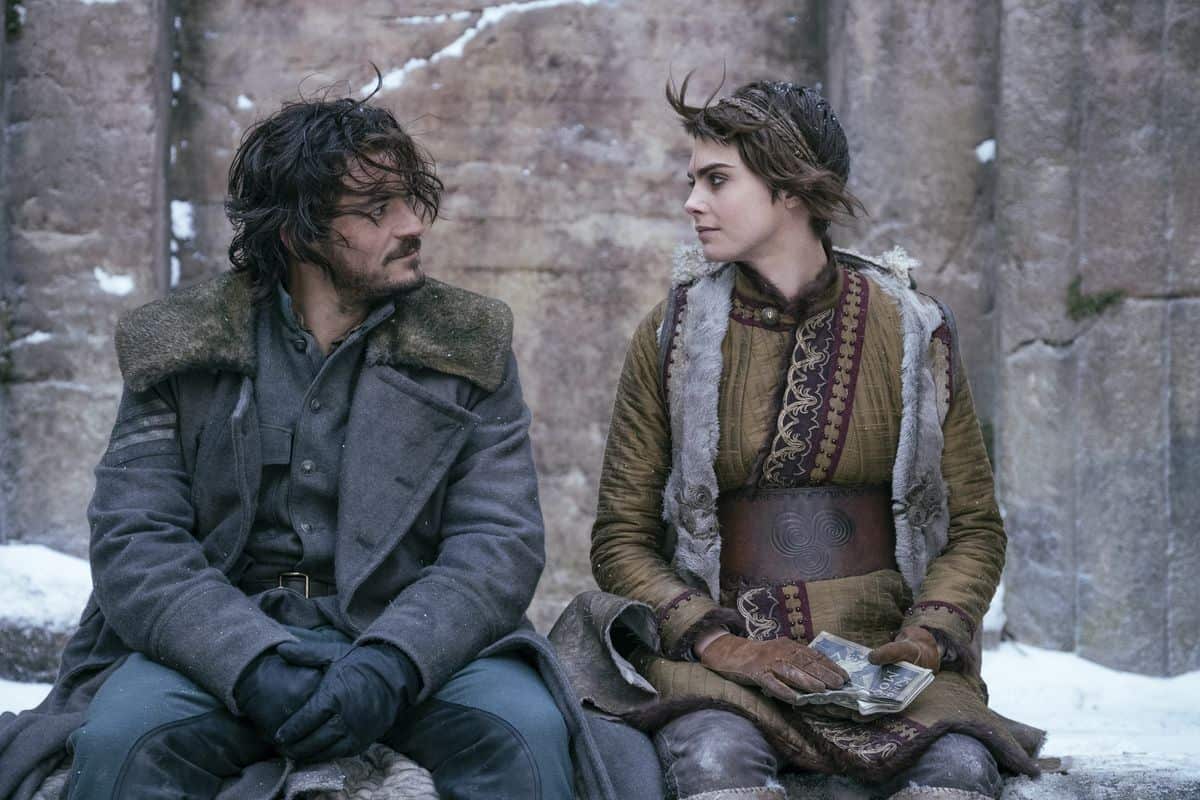 WARNING: This review contains spoilers for the pilot, but only the pilot.

With Game of Thrones over, a slew of fantasy shows will surely be trying to capture that audience. Amazon’s entry into the race is CARNIVAL ROW, a dark drama that merges magic and the real world into a steampunk, war-torn, fictional version of Britain. While Game of Thrones, it is not, CARNIVAL ROW does have some intriguing elements.

The story begins with fae Vignette Stonemoss (Cara Delevingne, Suicide Squad) fleeing her home. With her brethren strung up or shot down around her, she somehow dodges bullets and barely makes it to a sailing ship off the coast. But that is only the beginning of her troubles as she makes her way to the heart of the Burge, a stand-in for London, England.

The other lead is Vignette’s missing lover whom she assumes dead, human Rycroft “Philo” Philostrate (Orlando Bloom, Pirates of the Caribbean, Lord of the Rings). Philo is working as an inspector for the local constabulary, trying to find whoever is beating up the fairy folk refugees, also called Pix. Philo, having fought alongside them in the war with the mysterious Pact, feels respect and decency towards the fairies who have had to flee their home, which is not a sentiment shared by all of his kinfolk.

The political and racial themes are many and central. In a city populated mostly by humans, but with a decent among of fairies and Pucks, the tensions are rife. This should be familiar territory for showrunner Rene Echevarria, one of the writers for former series Star Trek: Deep Space 9, who is used to handling such stories. The relationships between the races at large and the individuals specifically are complex and dense, something only glimpsed at as the show begins, and with plenty of room to delve deeper. They feel familiar to the real world, but also appear to be pretty solidly laid out in their fictional version.

Design is one of the strongest elements of the series, aside from a small handful of weak spots in the CGI. It’s easy to see the influence of Guillermo del Toro, who was involved in the development, but also is more grounded than some of his work. The steampunk sensibility is in vogue, rightly so, but the production also has enough originality in the details to avoid just ripping off an existing style. Mixing something akin to magic into this sensibility is pleasing and feels natural.

Bloom is excellent, as one might expect, and Delevingne is coming along as an actress, not quite matching his level, but close enough for a starting point. I expect she’ll improve the series progresses, and she does project a tone that fits the world well. They are joined by Jared Harris (Mad Men), Indira Varma (Game of Thrones), Tamzin Merchant (The Tudors), David Gyasi (Interstellar), Simon McBurney (The Borgias), Andrew Gower (Outlander), and many lesser known, but talented, performers. I have no complaints about the cast, many of whom have fine experience in genre programs.

Great production design, a good cast, and thorough world building are all terrific elements to have, but don’t guarantee an overall success. CARNIVAL ROW feels very near to a great series, but there’s something just a little off to keep it from getting up to that top tier. It’s hard to put a finger on just why that is. Perhaps it’s a little slow, and isn’t quite as compelling as it needs to be to pull that off. Or maybe it’s just a hair darker than necessary. It’s fine, to be sure, but lacking some ineffable quality at the moment. It may gain this in time, but just doesn’t quite have it yet. It’s good enough to give it a chance, but I’m not sure at present if it’ll be worth seeing through.

To judge for yourself, check out all eight episodes of CARNIVAL ROW, now available on Amazon Prime.