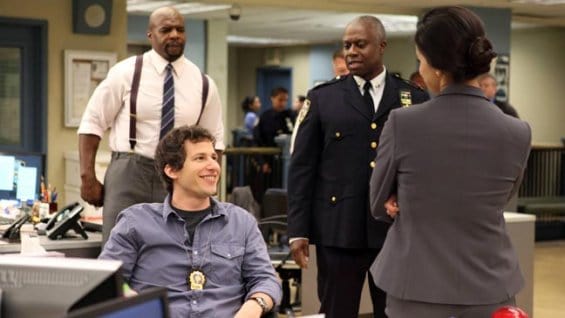 After watching the premiere of the new FOX sitcom BROOKLYN NINE-NINE and ruminating on it for a day, I am still not sure if I truly believe it is a great series. There are funny jokes, and it’s not predictable or rote, but it’s also a very odd tone that is hard to pin down. There is a terrific cast assembled for it, and the “Pilot” necessarily contains a lot of set up, so it seems to deserve the benefit of the doubt for now, until more installments can be viewed.

As the “Pilot” opens, the Ninety-Ninth precinct gets a new leader, Captain Ray Holt (Andre Braugher, Men of a Certain Age). Holt has an interesting back story, not revealed until late in the half hour, but who Holt is and what he has endured informs how he treats his new command, and the department, used to a different style, reacts poorly to the change.

Well, at least one detective does. Jake Peralta (Andy Samberg, Saturday Night Live) is a very effective, but highly immature officer. He scoffs when Holt insists he wear a tie, and has no problem goofing around at a crime scene. Yet, we also see how he puts together the pieces of puzzles that others cannot, so we know he has talent, and it does feel like a believable character, especially able to get away with how he is given the past captain we are shown.

Jake and Holt are the two obvious leads of BROOKLYN NINE-NINE, and the make for a very unusual pair. Even in the first half hour, one can tell they are both looking for ways to understand one another, and that will make them stronger. However, since a lot of the comedy in the “Pilot” is their clash, and one presumes that they will soon grow not to fight against each other so much, one wonders what the rest of the show will be like. After all, Jake can’t just grow up, or he wouldn’t be the character created here, but Holt does see Jake’s talent, and already knows how to mold it, so can’t give Jake too hard a time for too long.

Braugher is exactly what one would expect from him, given his resume: cool, layered, and intriguing. Samberg has kept the goofiness that has earned him a following, but honed it into a less cartoonish character, someone who could exist in real life, not as over-the-top as he has been. When his character does cross that line in taste, the other players are there to make him feel foolish, so it does come together nicely.

My favorite member of the main cast in the “Pilot” is second-in-command Terry Jeffords (Terry Crews, The Newsroom). Terry is a big, tough cop who shaped his fat into solid muscle, only to suddenly grow very afraid of the job after fathering a couple of adorable twin girls. This is something many a dad should be able to relate to, but also seems unique, at least when taken to this extreme, for a man who looks like Crews. Because Crews, as usual, has perfect delivery and timing, Terry is a great character I am missing whenever he is not on screen.

Jake’s partner is Amy Santiago (Melissa Fumero, One Life to Live), a by-the-rules woman who has many brothers and thinks she is better than Jake, even though Jake has a slightly better record. In the “Pilot,” there isn’t much interesting going on with Amy, who kisses Holt’s butt a lot, but still takes a back seat to the central pair. One wonders if she will step up and hold her own, or be a forgettable second banana.

The other two main detectives are Rosa Diaz (Stephanie Beatriz, Short Term 12), a seemingly emotionless, scary woman, and Charles Boyle (Joe Lo Truglio, Burning Love), a wimp of a man who is in love with Rosa. These two seem destined to be stereotypes, milked for a laugh, at least for the foreseeable future. I like the performances, Lo Truglio playing more earnestly than I’m used to seeing from him, and Beatriz being a blank slate, but I can’t really get behind the characters yet.

There’s also Gina Linetti (comedian and writer Chelsea Peretti), who is a little bit obnoxious initially, but I like Peretti’s stand up, so hopefully she will be able to channel some of that into the role.

This strange combination of personalities makes for an ensemble that is hard to figure out. With a setting that allows for recurring parts, too, such as Scully (Joel McKinnon Miller, Big Love), BROOKLYN NINE-NINE could paint a rich, full world, making a successful cop comedy for the first time in a long time. Or, it could be too inaccessible for a mass audience, scratching their heads and wondering what they’re supposed to be laughing at. I cannot predict at this time which is the more likely outcome.