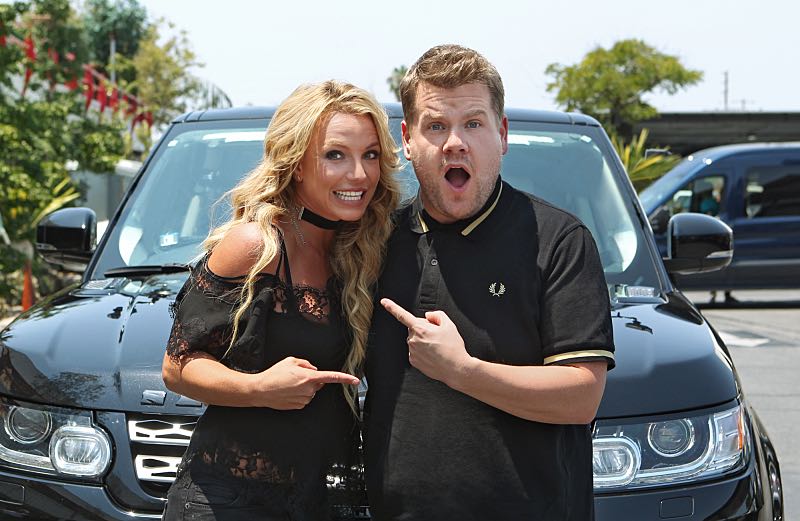 Pop superstar Britney Spears will be a passenger in James Corden’s next Carpool Karaoke segment on THE LATE LATE SHOW with JAMES CORDEN, Thursday, Aug. 25 (12:37-1:37 AM, ET/PT) on the CBS Television Network.

Spears is set to release her ninth studio album, Glory, on August 26 via RCA Records. A multi-platinum Grammy Award winner, Spears is one of the most successful entertainers in pop history, with nearly 100 million records sold worldwide. Her musical career boasts numerous awards and accolades, including six Billboard Music Awards and Billboard’s Millennium Award, which recognizes outstanding career achievements and influence in the music industry, as well as an American Music Award and the 2011 MTV Video Vanguard Award. Spears has had six No. 1-debuting albums on the Billboard 200 chart and 24 top 40 hit singles on the Billboard Hot 100 — five of which went to No. 1. She has been nominated for eight Grammy Awards and won for Best Dance Recording in 2005. Her cutting-edge pop concert Las Vegas residency, “Britney: Piece of Me,” at Planet Hollywood Resort & Casino, has been voted “Best Show in Las Vegas” and “Best Bachelorette Show in Las Vegas.”

Each week night, James Corden invites the audience to join in on the fun as the Emmy Award-nominated THE LATE LATE SHOW with JAMES CORDEN features a mix of celebrity guests, musical acts, games and sketches. The show’s post-Super Bowl broadcast delivered the highest ratings, with any host, since the show’s inception in 1995. THE LATE LATE SHOW with JAMES CORDEN has quickly become known for generating buzzworthy viral videos. The show holds the YouTube record for the most watched late night clip with “Adele Carpool Karaoke,” which has 121 million views. The show’s YouTube Channel has amassed more than 1.5 billion total views and nearly 7 million subscribers since the show’s premiere on March 23, 2015.

THE LATE LATE SHOW with JAMES CORDEN airs weeknights (12:37-1:37 AM, ET/PT) following broadcasts of the THE LATE SHOW with STEPHEN COLBERT on CBS. Ben Winston and Rob Crabbe are the executive producers.