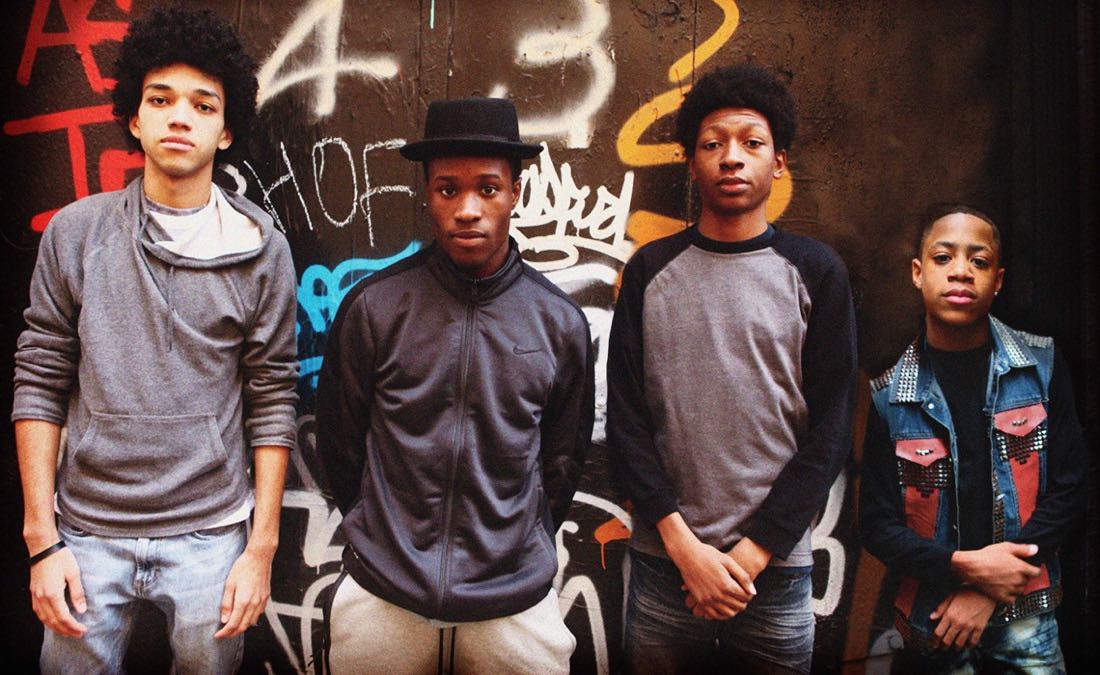 From Baz Luhrmann (The Great Gatsby, Moulin Rogue) comes a brand-new period drama on Netflix entitled THE GET DOWN. Set in 1977 (except for a brief framework bit in 1996), the series portrays the creation of hip hop in Bronx, New York through the eyes of a group of youngsters. Teeming with music and style, it’s an impressive drama.

Personally, I don’t care for most modern hip hop, but when the genre is performed well, it’s amazing. THE GET DOWN serves the style in the best of ways. In a world where disco reigns, that is, the minority neighborhoods in a run-down part of the city, the beat feels fresh and exciting. It’s impossible not to get caught up in the characters, and root for them when they grab the mics.

Specifically, I’m talking about rooting for Ezekiel (Justice Smith, Paper Towns), the central protagonist of the program. Having lost both his parents, Ezekiel turns to poetry and rhyme to help him cope. He naturally drifts towards a style that will become a musical movement, and his friends and teachers, or at least one teacher, are suitably impressed.

But, if not for a quirk of fate, it might go no further than that. Ezekiel is afraid to express his feelings, afraid of what his peers might think of him. He’s a kid who’s struggling, considering dropping out of school, and certainly not ready to expose his soul to the public. Multiple characters in the series call this cowardice, and Ezekiel almost lets his fear get the best of him.

I don’t think it’s spoiling anything at all to say Ezekiel overcomes this. If he didn’t, there would be no story. The kid meets Shaolin Fantastic (Shameik Moore, Incredible Crew) one night, and inspired, finds his voice. Which, while serving as the climax of the ninety-minute pilot, will only be the beginning of Ezekiel’s story.

Baz Luhrmann worked with Nas to make this series, and that influence shows, lending authenticity to the piece. He also chooses to depict the music in the context of larger society, with a politician, Francisco “Papa Fuertre” Cruz (Jimmy Smits, Sons of Anarchy), possibly fighting to save the neighborhood, and possibly just trying to line his pockets. Combined with street art and some other cool design elements, what is painted is a complex portrait of individuals in a time and place that they are not just a product of, but help shape the environment themselves. Taken all together, it’s very cool.

Of course, this being a drama, there’s a love interest; there’s always a love interest. Ezekiel is all about a girl named Mylene (Herizen F. Guardiola, Runaway Island), who is talented in her own right and dreams of being a singer. Mylene doesn’t let others define her, resisting Ezekiel’s advances not because she doesn’t return his feelings, but because she is determined to let nothing keep her from our career goals. In episode one, most of her story is shown in how it relates to Ezekiel. Hopefully, this will not be the case as the show goes on, with Mylene deserving of the spotlight in her own right.

There were a few things about THE GET DOWN that seemed off. The pacing moves a little slow in places, and the great Giancarlo Esposito (Breaking Bad) seems pretty wasted in the first installment. But overall I thought this series was well-made, well-performed, and while the initial description didn’t appeal to me all that much, I find myself wanting to view the additional five episodes that are set to release this Friday.

THE GET DOWN premieres August 12th on Netflix, and a second half dozen episodes are already ordered.