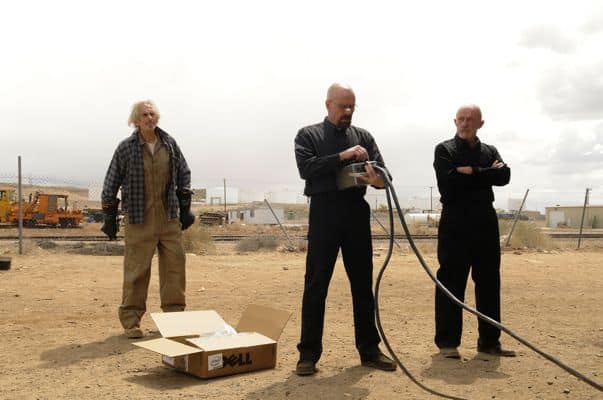 AMC’s BREAKING BAD moves into its final season this week with “Live Free or Die.” After the usual cryptic opening set in the near future, the premiere does not set up a new story. Instead, the events of the hour deal with the aftermath of last year’s finale. With Gus (Giancarlo Esposito) recently killed, everyone tries to process that news, and figure out their next step.

Gus may be dead, but Walt (Bryan Cranston) and the others aren’t out of the woods yet. Remember that video camera that followed Walt around the lab? So does he. But before he can get his hands on the footage, Hank (Dean Norris) and the police take Gus’s laptop as evidence. Locked up in a very secure evidence room, it seems there is no way that Walt’s nefarious activities won’t come out. Mike (Jonathan Banks) advises they all run.

Walter White has come a long way on his journey to becoming a kingpin. In earlier seasons, the former chemistry teacher would have panicked, or perhaps not known what to do. And Walt will do something, because he has no intention of uprooting this life he has built himself, or fleeing from anyone. While Mike doesn’t even consider any other option, Walt remains calm, and quickly devises a plan.

Actually, it’s Jesse (Aaron Paul) who suggests the genesis of the scheme. Again, another character who has shown a lot of growth. Jesse used to be an idiot junkie. But after learning much about chemistry and attitude from Walt and Mike, he is able to keep a clear enough head to remember that magnets can destroy computers, and that might be something that they can use.

So after Jesse convinces Mike not to kill Walt, the three of them embark on the crazy mission of driving a giant junkyard magnet right up to the wall of police headquarters and cranking it all the way up. This is effective, and while their ride is sacrificed, they do make a clean get away. They are safe, for now.

Is there anyway that the magnet can be traced back to them in the upcoming investigation? Many, many criminals surely have things in the evidence room that they would like destroyed, and surely there are multiple laptops, even if Gus’s is the only one shown. But while the magnet may be nondescript, it shouldn’t take the police long to find the one junkyard in town that has a new one. After that, it is anyone’s guess how the employees at said junkyard will react to an interrogation.

Long before that happens, though, there might be a more immediate problem. The alliance between Mike, Jesse, and Walt is temporary. Who will fill the power vacuum left by Gus? One of them, or someone else? If it is someone else, they might stick together a little while longer. If it’s one of the trio, someone will have to end up dead, because these are some very strong personalities that just won’t become subservient.

It won’t be Jesse. Jesse is a follower. He naively trusts both Mike and Walt, and that will likely be his undoing, sadly. He may suggest a course of action, but he believes in them, is willing to stick his neck out for them, and is happy to take orders, rather than give them. Walt has already used this against Jesse, manipulating him by poisoning a child. Should Jesse realize this, the tide may change. But until that happens, Jesse is blind to his friend’s machinations, which means that he is putting his faith in someone that he shouldn’t.

Surprisingly, perhaps, Mike has developed a bit of loyalty towards Jesse. While Mike wants to shoot Walt immediately, he stands down when Jesse gets in the middle. It could also very well be that Mike only participates in the magnet plan to protect Jesse. Their mentor-mentee relationship was formed as another way to control Jesse, but if Mike’s affection for the lad wasn’t real, why would he go along with this?

Maybe it will take Mike and Jesse to bring Walt down, should the true depth of Walt’s dark soul ever be exposed. Walt has everything that he needs, but after each accomplishment, he only gets more over confident, and desires more power and money. This cannot go on forever. Look at Gus, a true power player, who is eventually stricken down. The play BREAKING BAD presents is a tragedy if ever there was one, and Walt will not, can not, end up on top.

Elsewhere, Ted (Christopher Cousins) wakes out of his coma. This sends Saul (Bob Odenkirk) and Skyler (Anna Gunn) into a panic, as just before Ted was injured, he was ready to expose their money laundering. Only a lucky fall saved them then.

Skyler rushes to the hospital to confront Ted, and see what must be done now. Given how disturbed Skyler was by Ted’s accident in the first place, as well as her horror at what Walt has become in killing Gus, it is unlikely she would sign off on any plan that would cause Ted further harm, no matter what the consequences to herself. Thank goodness Ted is now compliant, thinking his life is in danger if he doesn’t keep his mouth shut. Which means that Skyler shouldn’t have to follow her husband’s descent to protect her family.

What is more surprising is how Walt reacts to learning about the Ted situation. Previously, Saul and Skyler kept this issue from Walt. Saul tells Walt the story, and after a bit of anger, where Walt is clearly threatening Saul, Walt returns home, hugs his wife, and tells Skyler that she is forgiven. This is arrogant and creepy, something that plays well on Skyler’s face. What has Walt become? Does she even recognize who her husband is these days? And can she ever love a man like this?

BREAKING BAD is a masterful character study. With only fifteen episodes left, there is a real sense that some things will soon be coming to a head. Each character is going to have to figure out what they want, and what they are capable of doing to get it. There has to be betrayal, because many of these goals will run counter to each other. If the writing continues to be as good as it consistently has been for the past four years, viewers are in for one heck of a finale!