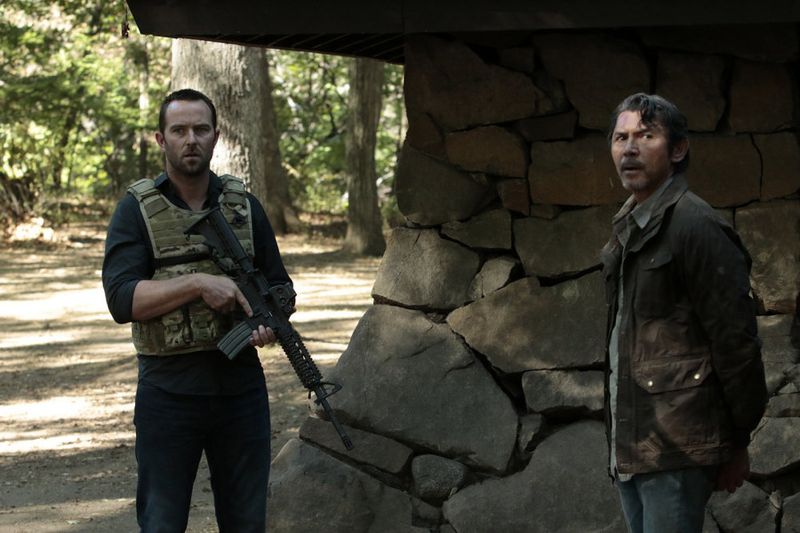 The second we saw that the FBI’s 2nd Most Wanted was being played by actor Lou Diamond Phillips, we knew that there was a deeper game to play with his character Saul Guerrero.  He was not just a criminal patsy that Mayfair (Marianne Jean-Baptiste) could use as her fictional informant in Operation Daylight.  Tonight’s new episode “Authentic Flirt,” takes us further down the rabbit hole with Saul and how he relates to Jane Doe (Jaimie Alexander).

In a recent press call, star Lou Diamond Phillips teased a bit more about his character Saul as well as talking about his new film “The 33” and the delayed film “Tao of Surfing.”

Can you tell us what intrigued you about your character?
LOU:   I was very, very intrigued by BLINDSPOT just from watching the ad. I was going to watch the show as a fan, and then the call came to go on the show. They didn’t have a script yet, but they gave me a character description. I thought, “That sounds like a lot of fun.” I’d worked with Martin Gero so I had a great sense of how intelligent the script would be and how much fun it would be. So I kind of jumped into the BLINDSPOT, so to speak. And, ultimately, what was a lot of fun that was.

You have an important part to play, and obviously Mayfair has been kind of hiding it from everybody what’s going on. Can you talk at all about how he’s connected?
LOU:   Saul is definitely a part of the puzzle, but I don’t even know if he knows what part he plays in this. And every question just leads to more questions and he’s just one big worm in a can of worms. So it’s intriguing, and then obviously I think any show, any success, has a long-term plan. It’s very interesting to see how it’s going to play out.

How many episodes will you be on BLINDSPOT?
LOU:   I don’t even know if I can reveal that. All I can say is: it’s more than one. Yeah, believe me, it’s a show about black ops and high intelligence. (Laughs) And, yeah, I’ve got a gun to my head right now. I don’t know if you can see that, but they’re watching every word I say!

So it must be very exciting to be the Number 2 most feared criminal on the FBI’s Most Wanted List.
LOU:   I have to say: yes. He might be the most feared, but he’s got a great sense of humor. And that’s one of the things that I really loved about the role. It was an absolute blast to play it.  That’s one of the nice things about bad guys is you have a license that you would not necessarily have as a hero. So it’s always fun to come in and let the bad guy play a little bit.

You mostly played good guys throughout your career. So do you find you’re more excited to play the bad guy roles?
LOU:  I love playing bad guys because the gloves come off and there are no rules. You can be as mean or — I don’t know — irreverent as you want. And certainly the bad guy in BLINDSPOT is part and parcel of that.  I mean I think he’s hilarious.  They gave me some very funny lines, and he’s incredibly talky. But, yes indeed, he’s a bad guy. And it’s definitely different than Henry Standing Bear, or the very, very emotional and earnest role that I have in “The 33.”

Is there like a type of role or maybe some character that like you would really love to get to play?
LOU:   The one thing that I don’t get to do enough of is comedy, and I absolutely love doing that. I cut my teeth on it when I was doing theater back in Texas. Actually, my first paying role ever was part of a sketch comedy troupe called The Zero Hour, where we used to do comedy in punk clubs. And if you weren’t funny, they threw bottles at you. Fortunately, I’ve had great success in drama. I’ve had great success with intense roles. But I like to get away from the brooding ethnic every once in a while and bring the funny.

Have you had a chance to see all of the episodes of BLINDSPOT, and what you think of it?
LOU:   I was very fortunate in that the week while I was filming, I actually got to have Sullivan Stapleton and Audrey and Ashley with me in my hotel room, and we watched the premiere together. So that was pretty exciting.  I’ve seen a few of the episodes. But fortunately and unfortunately for me, I’ve been incredibly busy these last few weeks on this press tour, and getting things together for “The 33.”  I also just got back from Australia and New Zealand, making a couple of appearances. So I’m not quite up to date, but I certainly have seen enough of the shows to know that it’s incredibly quality writing, and the directing. It’s just a big show. It’s like a little action film every single week. I think they’re doing a great job.

Do you get to do the action the upcoming episodes?
LOU:   I get to do a lot of action and I have to do all of the action while handcuffed.  I took a few bruises and a few bumps on this one. But like I’ve always said about fight scenes, “If you don’t come away a little sore, you weren’t doing it right.” I can’t really comment on what coming up for Saul Guerrero just that he is intrinsic to the plot and to what’s going on with not only Mayfair, but obviously Jane. But I don’t think I’m allowed to divulge any of those other secrets.

On another topic, actor Eric Balfour has talked about the film that you co-star with him, “Tao of Surfing,” and how shooting on that was especially sporadic. Can you tell us if the shooting has concluded on that piece?
LOU:   No, unfortunately we have not finished that film. It’s one of those little films that has struggled, and still trying to get the finishing funds on that. So hopefully sometime in the future, because it truly is a beautiful little piece. But the state of independent film in the world right now it’s difficult. It’s like getting blood out of a turnip.

I’m intrigued that you’re in this series because you have played so many different roles. Would you rather have played a different character? Or do you really like what your character is doing in this series?
LOU:   I absolutely love what my character is doing in this series because it’s different than what I’m doing on LONGMIRE. I mean it’s 180-degrees from him. And it’s a different kind of bad guy than I’ve played recently. So there’s a certain charm to him.  There’s definitely a sense of humor. There’s this off-the-cuff, cavalier quality about him that I found very refreshing and a lot of fun to play, especially when everything else is so life and death for the regular characters. So many times the process of filming can be an incredibly enjoyable one and this was one of those situations.

To see just whether Saul Guerrero will be wrecking more havoc in the BLINDSPOT world or if he will become an unexpected ally, be sure to tune in for all new episodes on Monday nights at 10:00 p.m. on NBC. (Fans can also look forward to seeing more of Lou Diamond Phillips in Season 5 of LONGMIRE coming next year on Netflix.)