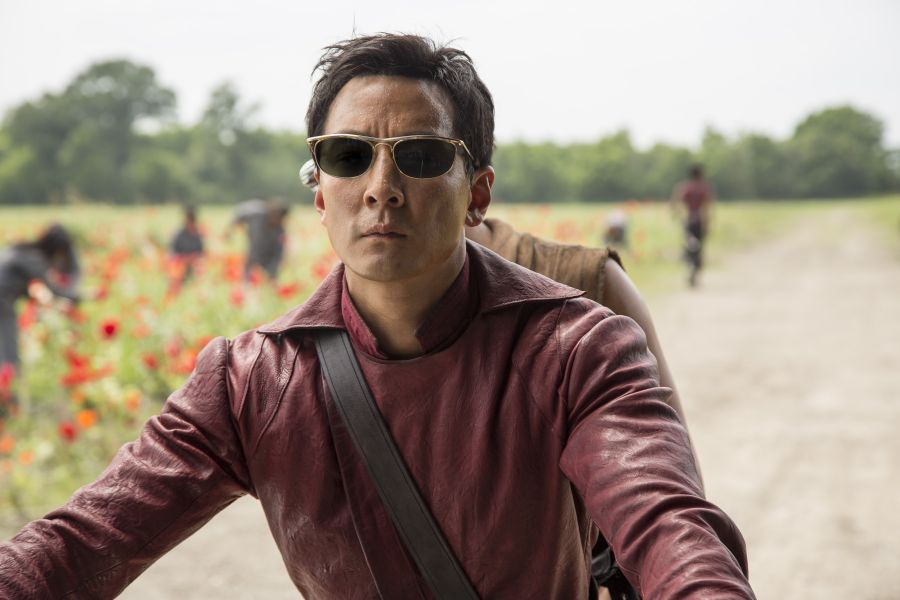 AMC’s newest drama, INTO THE BADLANDS, premieres tonight. Set in a future where guns have been eradicated, the territory is broken up into domains runs by Barons, who use teams of assassins to keep their subjects in line. This makes the setting seem more like the past, but don’t think on that too deep. Instead, just enjoy the gratuitous violence.

The description of the series may sound a bit flip, but so is the show itself. There are numerous fight scenes, which have been the focus of much of the promotional materials for the show. Is there ever any reason we need to see extended fight scenes where one supernaturally gifted combatant takes out an entire gang? Nah, but it’s fun, and that’s why this type of material exists.

INTO THE BADLANDS does have substance, too. The characters are interesting, and the political machinations between those who seek to extend their power provide engaging drama. But I’m simply pointing out that by mixing it with light entertainment, it makes INTO THE BADLANDS slightly less than, say, The Walking Dead, which uses fighting for one’s lives to enhance scenes, rather than making it the center of sequences.

At the center of INTO THE BADLANDS is Sunny (Daniel Wu, The Man With the Iron Fists), the lead protector for the land’s most powerful Baron, Quinn (Marton Csokas, Klondike). Sunny is a loyalist who is comfortable with the current system, until he’s not. Mysteries from his past are brought up when he finds a kid, M. K. (Aramis Knight, The Dark Knight Rises), with inexplicable powers and a coincidental symbol. This, combined with news from his secret girlfriend, Veil (Madeleine Mantock, The Tomorrow People), make Sunny question everything he values and believes to be true. He begins a real hero’s journey.

It’s because of this compelling character that I want to watch INTO THE BADLANDS. Sure, it’s entertaining, but that in of itself is not enough these days. Thankfully, this program doesn’t just rely on that, even though that’s the most obvious, flashy thing about it.

There’s also an enticing sexual component. Quinn is married to Lydia (Orla Brady, American Odyssey), and will soon take a second, much younger, wife, Jade (Sarah Bolger, The Tudors). AMC stops short of showing any real nudity, as basic cable usually does, but there’s certainly sexiness in the power wrangling that is just getting started. While this plot doesn’t cover any new ground, at least not yet, it does add another interesting layer to the proceedings.

The Widow (Emily Beecham, The Village) ensures the boys won’t be the only ones having fun. She’s a new Baron who is at odds with Quinn and has her sights set on M. K. When she shows up, she immediately grabs the spotlight, and she clearly has some physical attributes of her own. This character should help ally fears that INTO THE BADLANDS is only set to attract male viewers. She’s beautiful and badass.

All of these characters exist in a fully realized world. Great thought has gone into building this system, incorporating historical context, while twisting it enough to be unfamiliar to students of the past. The result is a setting believable and strange at the same time, and one well-suited to the people who populate it. The product design is excellent. It’s almost a sci-fi / fantasy show, while managing to stay more grounded than what is typical of that genre. It’s hard to strictly categorize it, but I see that as a plus, showing originality.

For all of these reasons, INTO THE BADLANDS is worth checking out, even if you’re not into the martial arts. It airs Sundays at 10 p.m. on AMC.