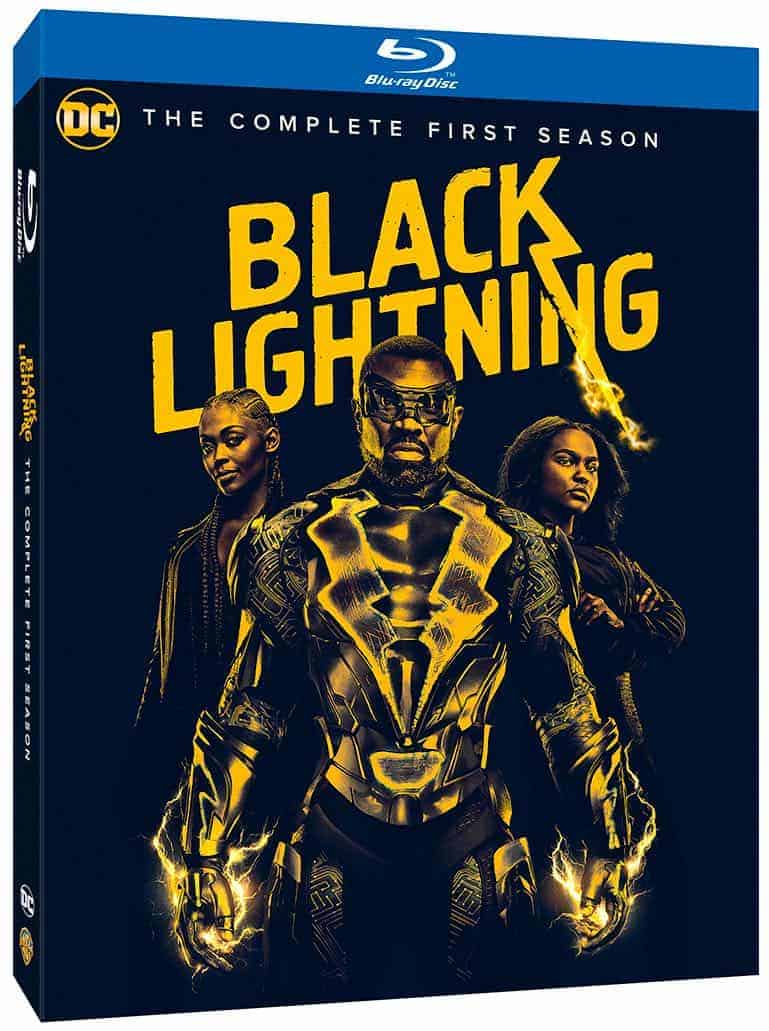 From Warner Bros. Television, DC Entertainment and Berlanti Productions, the producers of the hit series The Flash, Arrow, Supergirl, and DC’s Legends of Tomorrow, along with Akil Productions, comes the next Super Hero breakout hit as Warner Bros. Home Entertainment releases Black Lightning: The Complete First Season on Blu-ray and DVD on June 26, 2018. Black Lightning delivered the most-watched series premiere in the past two years and remains The CW’s second highest-rated show just behind The Flash. Fans that purchase the set will be able to watch all 13 electrifying episodes from the first season, supercharged with extra content including the 2017 Comic-Con panel, new featurettes, deleted scenes, gag reel and more. Black Lightning: The Complete First Season is priced to own at $29.98 SRP for the DVD and $39.99 SRP for the Blu-ray. Black Lightning: The Complete First Season is also available to own on Digital via purchase from digital retailers.

Black Lightning follows Jefferson Pierce (Cress Williams), a man wrestling with a secret. As the father of two daughters and principal of a charter high school that also serves as a safe haven for young people in a neighborhood overrun by gang violence, he is a hero to his community. Nine years ago, Pierce was a hero of a different sort. Gifted with the superhuman power to harness and control electricity, he used those powers to keep his hometown streets safe as the masked vigilante Black Lightning. Almost a decade later, Pierce’s crime-fighting days are long behind him…or so he thought. But with crime and corruption spreading like wildfire, and those he cares about in the crosshairs of the menacing local gang The One Hundred, Black Lightning returns — to save not only his family, but also the soul of his community.

“In only its first season on the air, Black Lightning has quickly established itself as a hit series with its action-packed episodes and stellar storyline,” said Rosemary Markson, WBHE Senior Vice President, Television Marketing. “We are very excited to release the first season on Blu-ray and DVD so fans and newcomers alike can add the new hit series to their collections along with newly added bonus content.”

With Blu-ray’s unsurpassed picture and sound, Black Lightning: The Complete First Season Blu-ray release will include 1080p Full HD Video with DTS-HD Master Audio for English 5.1. The 2-disc Blu-ray will feature a high-definition Blu-ray and a Digital Copy of all 13 episodes from season one.

5.      And Then the Devil Brought the Plague: The Book of Green Light

10.  Sins of the Father: The Book of Redemption

11.  Black Jesus: The Book of Crucifixion

12.  The Resurrection and the Light: The Book of Pain

The first season of Black Lightning is also currently available to own on Digital. Digital allows consumers to instantly stream and download all episodes to watch anywhere and anytime on their favorite devices.  Digital is available from various retailers including Amazon Prime Video, iTunes, PlayStation, Vudu, Xbox and others. A Digital Copy is also included with the purchase of specially marked Blu-ray discs for redemption and cloud storage.

DC Entertainment, home to iconic brands DC (Superman, Batman, Green Lantern, Wonder Woman, The Flash, etc.), Vertigo (Sandman, Fables, etc.) and MAD, is the creative division charged with strategically integrating across Warner Bros. and Time Warner.  DC Entertainment works in concert with many key Warner Bros. divisions to unleash its stories and characters across all media, including but not limited to film, television, consumer products, home entertainment, and interactive games.  Publishing thousands of comic books, graphic novels and magazines each year, DC Entertainment is one of the largest English-language publishers of comics in the world.

BLACK LIGHTNING and all related characters and elements are trademarks of and © DC Comics.