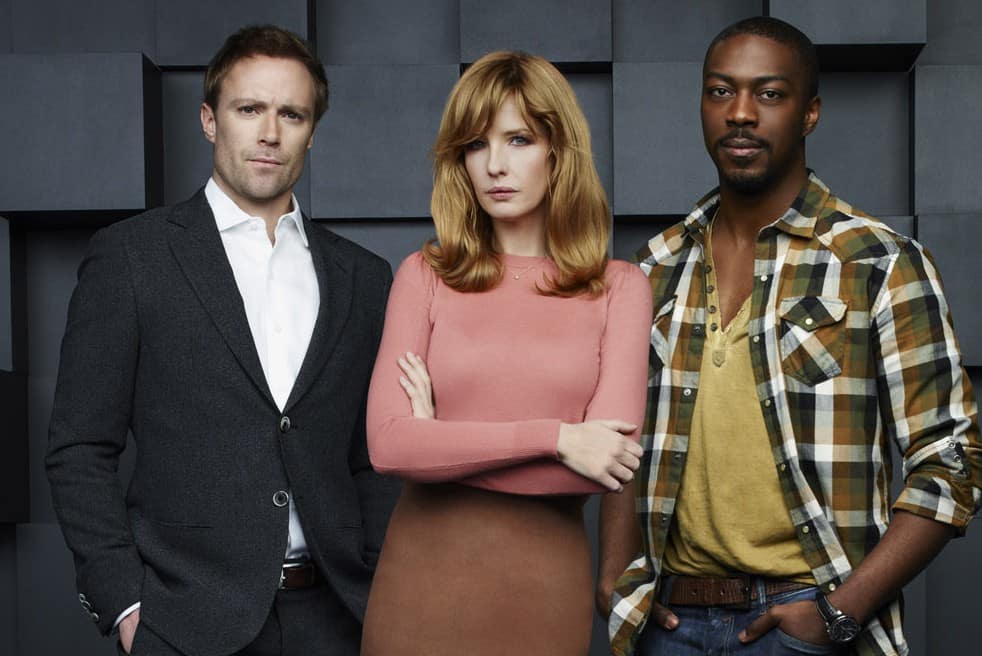 ABC’s new drama, BLACK BOX, is an interesting concept. A successful professional with bi-polar disorder and a tendency to go off her meds deals with life, love, and work, all while trying to hide and control her secrets. There is a recent trend on television to build a series around an eccentric genius, but at least in the “Pilot” of this one, more time is given to examining the lead’s personality than in others in the vein. That makes it feel fresh.

Kelly Reilly (Sherlock Holmes) plays Dr. Catherine Black, the main character. Black isn’t necessarily likeable, but she is a complex, fleshed out character. She’s a bit like FOX’s House in her abrasiveness and unreliability, though in her case, the problem is staying on the drugs, not off them. She also hallucinates, like the lead in TNT’s Perception, but BLACK BOX is what Perception should be, making the story more about Catherine than some case. Too bad the play on her name in the title is lower brow than the rest of the package.

Much of the first hour is spent raising the question of if Catherine should be medicated. Catherine points to the work of brilliant minds in history who accomplished great things when allowed to be who they are, wondering if taking the pills is holding her back in her own work. But her head doc, Dr. Hartramph (Vanessa Redgrave, Lee Daniels’ The Butler), points out that those heroes of Catherine’s all died young and Catherine could accomplish more, if a little more slowly, if she takes measures to stay alive.

BLACK BOX has a point of view. The writers are clearly in favor of treating this disorder. But they do a good job of making the audience understand Catherine’s reasoning, and for a bit, maybe even believe it. Yes, Catherine au naturel is destructive, but if she can hang on for a little longer, she might accomplish something great. It’s a revealing view of mental disease.

The “Pilot” provides a convenient door into this world in Will (David Ajala, The Dark Knight). Boyfriend to Catherine for the past year, Will only finds out about her struggle in this first episode, after proposing. At first, he’s mad that she kept this from him and understandably freaked out. But then he finds a side of this that he likes, which is a little creepy, but also something sympathetic.

When one begins to think Catherine can handle herself, one need only look at the relationship between her and Will to see how broken she is. Catherine doesn’t want to get married. She doesn’t think she deserves love or that Will should have to put up with her. She doesn’t want kids because of the risk of passing on her condition. But she also doesn’t want to run Will off, and she’s attracted to the dangerous part of him that encourages her to be wild. It’s not a healthy situation.

In addition to Will, we meet Catherine’s supportive brother, Joshua (David Chisum, One Life to Live), his uptight wife, Regan (Laura Fraser, Breaking Bad), and their sweet daughter, Esme (Siobhan Williams, Hell on Wheels), with whom Catherine is close. They are a link to normalcy and people she can rely on when she needs help. Thank goodness Catherine has Will and Esme, especially, giving her a connection to pull her back when she blasts off into space. Plus, there’s a great twist involving the family late in the hour.

Catherine’s co-workers are a less helpful bunch, though that could be because they don’t know what’s wrong with Catherine. Her boss, Dr. Morely (Terry Kinney, Oz), trusts her unconventional methods, meaning he doesn’t try to reign her in. New surgeon Dr. Bickman (Ditch Davey, Spartacus: War of the Damned) is practically a sexual predator, not a good person to be around when one of Catherine’s symptoms is hypersexuality and she’s in a steady relationship. Dr. Lark (Ali Wong, Are You There, Chelsea?) might be her friend, though.

BLACK BOX does have a procedural element. Even in the “Pilot,” there’s a patient that Catherine helps, amid all of the chaos in her own life. But the fact that her own life is so messy, and that we get to see so much of it, will fool many viewers into thinking this is more character study than case-of-the-week. I hope that balance is maintained in future installments, and not just used in the set up.

As a whole, I like BLACK BOX. It’s interesting with a sort-of unique character, certainly smarter than most broadcast network dramas. It has some cool visuals, mainly when Catherine is tripping. It also raises some interesting questions that should make viewers think. Check it out.