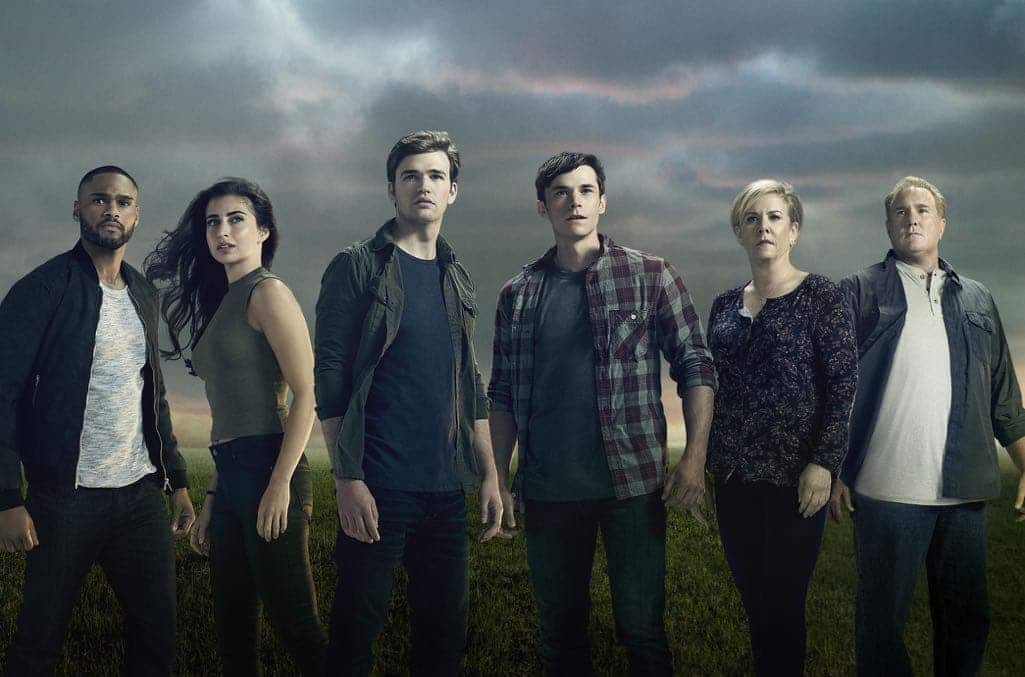 Freeform has a new supernatural drama this week called BEYOND. A man wakes up from a twelve-year coma in perfect health, no muscle atrophy or anything. So maybe he wasn’t in a coma, as some who seek him out suggest. Also, he now has some crazy powers, and people who seem pretty shady are after him. Essentially, it’s a lot of mystery and chaos wrapped in what feels like a YA series, though this one isn’t based on any book.

The main character is Holden Matthews (Burkely Duffield, House of Anubis). Holden is about to become a high schooler when whatever happens to him happens. Waking up, he remembers nothing of the last twelve years, except for confusing flashes of images that indicate he did more than just sleep. It’s hard for him to piece that together, though, while trying to readjust to his family and getting pulled into something bigger.

The first thing that strikes me about the central family in BEYOND is that they don’t feel real. Mother Diane (Romy Rosemont, Glee) is nurturing and father Tom (Michael McGrady, Ray Donovan) is involved with his kids, and yet, Holden is allowed to go out on a school night, riding a motorcycle and drinking beer. I’m sorry, but if the parents were as good as they seem to be, I don’t think all that would happen, especially not to a boy who seems so interested in science and space, who probably wouldn’t want to do those things at that age anyway. Maybe I’m just sheltered, but the characters don’t seem consistent or well through-thru.

It’s interesting that BEYOND chooses to recast all the central players from its opening to its twelve-years-later story. The kids have grown, sure, especially Holden’s younger brother, Luke (Jonathan Whitesell, The 100), so they should be different actors. But Tom and Diane also change. I can’t think of another show that makes this decision, though I don’t mind it. Given the seemingly low-budget quality of the production, the money is better spent on ‘big’ action sequences rather than trying to convincingly de-age a couple of performers.

Where things really fall apart for me is just the lack of engagement of the plot or characters. Holden is our lead that the audience needs to get behind, but we don’t really see anything in him that makes us like or root for him. Things happen to him, but aside from a few goofy moments with Luke and certain love interest Willa (Dilan Gwyn, Dracula Untold), we get little insight into his personality. Why are we supposed to care about Holden? What is his motivation?

The rest of the cast isn’t much better. There may be something weird going on with the family, given how well they’ve apparently adjusted during Holden’s absence. Willa is definitely into the deeper mythology, and while my instinct is that we can trust her, it’s probably too early to know that for sure. Holden’s childhood best friend, Kevin (Jordan Calloway, Unfabulous), is not an upstanding citizen. I don’t see anything in any of them to hook me.

I guess BEYOND is trying to really bank on its mystery, and that’s fine as long as it has strong characters along for the ride. It doesn’t. The pacing is slow, and the story is more confusing than compelling. I don’t know what’s going on after watching the pilot, and I’m sure I’m not meant to, but the problem with this series is that I don’t care to find out, either.

The entire first season of BEYOND, all ten episodes, will be available streaming on Hulu and the cable network’s app on premiere day, ready for binging, and this may work in its favor. With the next episode readily accessible, some viewers may decide to just keep going or allow auto-play to do its thing. However, I feel no compulsion to continue through the nine episodes made available to press, so I would suspect some who do stick it out will feel like their time has been wasted in the end. I could be wrong, but BEYOND fails to make me want to find out.

BEYOND premieres tomorrow on Freeform, and all episodes will be immediately available streaming as well.