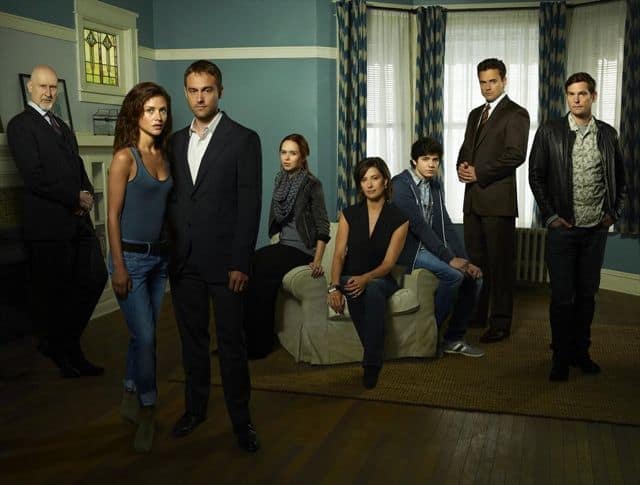 ABC continues its run of soapy dramas with one-word titles, the newest, following in the footsteps of Scandal, Revenge, and Deception, is BETRAYAL. The tale of cheating spouses, murderous sons, and backstabbing business deals, BETRAYAL attempts to cash in on what has become an ABC brand, developing a serial story of intrigue and salaciousness. Sadly, it seems destined to be among the lesser efforts, soon canceled.

The “Pilot” begins by showing us Sara Hanley (Hannah Ware, Boss) bleeding on the floor and being loaded into an ambulance. It’s the same trick Revenge likes to use, revealing a later disaster early in the year, and Sara is one of the two most primary characters, so this sequence not only feels stale, but without tension. Sure, we want to know how Sara has been hurt and who did it, but there’s little danger that she’s going to die.

After dispensing with that bit of nonsense, which the plot won’t catch up to until at least mid-season, the real episode begins. At a party, Sara meets Jack McAllister (Stuart Townsend, XIII: The Series) and falls in love. These two are definitely soul mates, as every bit of their electric chemistry hints at, and even though Jack professes not to be interested in art, he even buys one of Sara’s works. Yes, Sara is an artist, and one who has kept her last name, perpetuating the idea that this is a common lifestyle one can aspire to, and that she’s not one of the lucky few.

There is just one little snag with Jack and Sara being together: both are married with a kid or two at home.

Sara’s husband, Drew Stafford (Chris Johnson, Against the Wall), is a bit preoccupied with work, trying to turn a legal career into political office. But he’s not a bad guy. He loves his wife, is supportive of her work, and seeks to celebrate his victories with her. Still, for some reason, Sara isn’t satisfied.

Jack is in a similar situation, happily working for Thatcher Karsten (James Cromwell, American Horror Story: Asylum), his father-in-law. His wife, Elaine (Wendy Moniz, Damages), is shown to be less joyful, not really approving of her daddy, and seemingly a bit jealous of Jack’s relationship with their twin teenagers (Men of a Certain Age’s Braeden Lemasters and First Day’s Elizabeth McLaughlin). But again, no obvious tension that would lead either spouse to stray.

Which is why Sara and Jack’s tryst doesn’t make any sense. Maybe they do have a magnetism that they can’t ignore. But they know it’s wrong, both saying so out loud, and both have a lot to lose. Why would they risk the entire lives they’ve built for themselves on a bit of sex with a near-stranger?

Of course, BETRAYAL isn’t satisfied with just infidelity. Tossing all realism out the window, the death of Thatcher’s brother-in-law not only has this family scrambling to protect Thatcher’s mentally challenged son T.J. (Henry Thomas, Gangs of New York), who is suspected, but also ends up putting Sara in a compromising position. I won’t get into the details, in case you plan on watching the show and don’t want spoiled, but it all feels extremely staged and forced.

Now, it’s true that a show such as this can’t just have a single arc, and with a limited number of characters, lots of drama must be built in to give it legs. However, other series have managed to balance a lot of twists, developments, and players with ease, so when it’s done this clumsily, it doesn’t feel right. Plus, there’s not a single character that really resonates and makes viewers want to get behind them. BETRAYAL may not be the worst show out there, but it puts itself up automatically against its peers on the same network, and it falters by comparison.

By the way, I don’t think Thomas does a convincing performance of a character with his condition. I know there is a spectrum, and not every person with mental disabilities acts the same, but this one just doesn’t feel authentic to me.

Overall, I could be wrong, and BETRAYAL may find a way to capture viewers. But I don’t see anything worth championing from it in the “Pilot.”