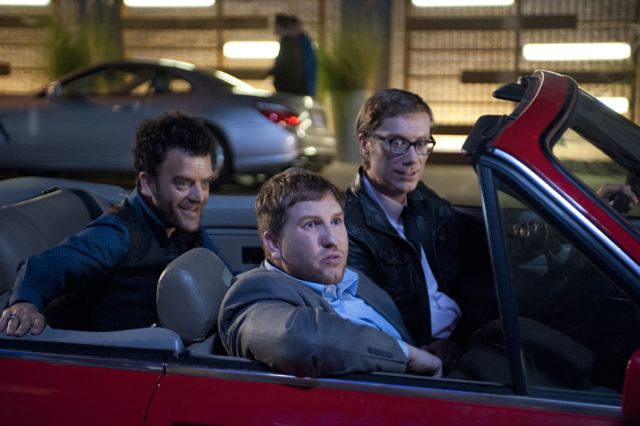 Most U.S. television viewers are used to seeing Stephen Merchant (The Ricky Gervais Show, An Idiot Abroad) only in the company of Ricky Gervais (The Office). That may change, however, as HBO is airing a non-Gervais series starring Merchant, his first lead role, called HELLO LADIES. It premieres this Sunday, September 29th at 10:30 p.m. ET.

If anyone assumed that Gervais had the monopoly on awkward and weird and Merchant was just along for the ride, that is firmly disproven within just a few minutes of the “Pilot.” Merchant plays Stuart, a tall, lanky man who can’t take a hint and is creepy in his desperation around the fairer sex. If he gets a woman in his sights, he does not let go, no matter how clear she makes her disinterest, as happens in the very first episode. His persistence is not charming, it’s the opposite, and Stuart is the type of guy one would be embarrassed to be seen with in public or admit to being friends with. At least, while he’s acting like a stalker.

I’m not sure who the target audience is for HELLO LADIES. With a main character so unlikeable, would anyone root for him? He’s funny, yes, but that’s about all he has going for him. He isn’t generous, hounding his pals for water or gas money. He isn’t interesting. He’s too old to get away with seeking a series of one-night stands. He does have confidence, but he doesn’t have the looks or the charisma to back it up.

Which doesn’t necessarily destroy the show. Look at David Brent in the original British version of The Office; Merchant has made a career out of writing for these types of people, even if he doesn’t usually play them himself. As an actor, Merchant is definitely capable, highly believable as Stuart. The problem is that Stuart is just so distasteful a human being that it makes him hard to watch.

Stuart’s buddies aren’t much better. There’s Wade (Nate Torrence, Studio 60 on the Sunset Strip), who is wallowing through a divorce and can’t shut up about his wife, which drives the girls away just as surely as Stuart’s ineptitude does. And there’s Kives (Kevin Weisman, Alias), Wade’s neighbor who is a big jerk and doesn’t get along with Stuart, but the wheelchair he’s confined to buys him enough sympathy that girls can overlook his attitude, only making Stuart more jealous. It’s an unlikely trio, with two of the three certainly not at all successful on the club scene.

Torrence and Weisman are both funny, too. Torrence is good at the wimpy loser shtick, and Weisman’s character’s ego belies what one might expect from such a role, the actor’s performance barely influenced by the chair, if at all. These men are usually supporting players, so don’t distract the spotlight away from Merchant, but work well him in the parts they play.

Strangely, Stuart lives with a normal, attractive, female roommate named Jessica (Christine Woods, Go On). There is nothing romantic between them, with Stuart treating her like someone he’s known a long time, never trying to hit on her. Of course, he’s not shy around her friends, trying to pick them up when they make the mistake of coming over. For Jessica’s part, she gets fed up with Stuart’s lecherousness, though she somehow still likes him, but not in an overly sweet way. They just seem to enjoy one another’s company.

In most shows, this is the recipe for an eventual hook up between the leads, or at least a one-sided pining, or maybe even a brother / sister vibe, with Stuart looking out for Jessica. Instead, Jessica could be a man and it would not change their dynamic one iota. It’s a very strange pairing, and I’m not sure how I feel about it, to be honest, whether to call it fresh or just admit it doesn’t work.

Woods has a brilliant sense of timing, but sadly it appears that she will be the “straight man” in HELLO LADIES. I believe she could play pathetic, too, if they let her, or could handle her own subplots and gags. What she does in the “Pilot” is sleep with a guy and then cold feet about being with him, not exactly work that requires much creativity from the portrayer. She is every bit as talented as the men in the cast, and it’s disappointing that she seems to have a lesser role, even if she might have more screen time than one or two of the others.

HELLO LADIES is not a bad show, but it lacks the magnetic draw I had been expecting. Given the cast involved, it could and should be a notch better than this.