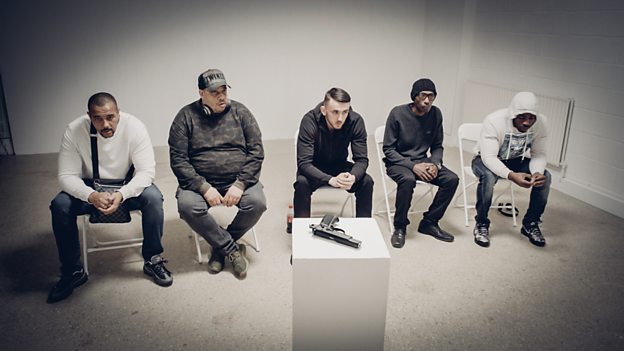 Documentaries fronted by Stacey Dooley and Mim Shaikh, films offering astonishing access to subjects at the forefront of national conversation and new Storyville commissions showcasing the best in international documentaries amongst those announced.

Ahead of her panel discussion at Sheffield Doc/Fest, Alison Kirkham, Controller BBC Factual Commissioning, announced a range of new factual titles airing across the BBC in the coming months.

On BBC One, Hidden Homeless a film for Children in Need, will see Stacey Dooley explore the story of Britain’s hidden homeless teenagers on our streets; on BBC Two Inside The Bank Of England (w/t) will offer unprecedented access to the inner workings of the Bank, with cameras following as Governor Mark Carney and his staff try to revive the UK economy.

Also on BBC Two will be one-off film Gun No.6 following the historic stories of every crime carried out using Britain’s most deadly, illegal gun – with testimony from loved ones left behind and insights from former-perpetrators of gun crime, at a time when it’s never been more pressing to understand why people resort to casual use of lethal weapons on the streets.

On BBC Three, Mim Shaikh fronts a new documentary Finding Dad (w/t), part of the Big British Asian Summer season. Taking a deeply personal journey to try and track down his father, Mim shares a story not just significant for him, but one agonised over by thousands of young people in the UK with one in ten fathers having no contact with their children.

For BBC Four’s Storyville, Under The Wire tells the story of war-correspondent Marie Colvin and photographer Paul Conroy, whose determination to bring the stories of ordinary Syrian people caught up in a brutal war to the world saw only one of them return. The Cleaners reveals the world of content moderators tasked with trawling through the world’s most violent, disturbing and highly contentious online material, exploring the hidden and complex world of digital content moderation.

Alison Kirkham says: ”The BBC factual department has had a fantastic 12 months, winning multiple awards including Baftas, RTS Awards and Griersons. This range of programmes that we are announcing demonstrates our continued commitment to take audiences into worlds and explore issues with broad appeal that are hugely relevant today, including homelessness, the economy and Brexit, the challenges of social media, disability and gun crime. Through unprecedented access and fantastic story telling, each subject will be explored in a truly engaging and thought-provoking way”

“A fifth of young people are homeless, you just can’t see them”

Every year thousands of ‘hidden homeless’ teens avoid the streets by sleeping on night buses, friend’s sofas or swiping right on Tinder to score a place for the night and a hot shower for the morning.

For Children In Need, Stacey Dooley meets some of these teenagers and shares their journeys as they face life without a home. Imagine being a teenager and told you need to ‘prove’ you have been abused because otherwise you are ‘intentionally homeless’.

Imagine sleeping spending your 18th birthday in a shelter and being told you’re no longer a ‘priority’ because you have become an adult overnight.

Imagine living through all that and fighting to stay in education and employment, and still maintaining hope, dignity and aspirations for a future.

With government cuts hitting frontline services the most, this film follows the frustration of some remarkable and resilient teens, as they endure trials that would overwhelm most adults.

Hidden Homeless (1×60’) was commissioned by Charlotte Moore, Director, TV Content and Clare Sillery, Head of Commissioning, Documentaries. The BBC Commissioning Editor is Beejal Patel, it is made by True Vision and the Executive Producer is Brian Woods. The Producer is Amy Richardson and the Director is Katie Rice.

Inside The Bank Of England (w/t)

Throughout 2018, the Bank of England is allowing documentary cameras extensive access within its formidable City of London headquarters and UK-wide operations. This landmark series will be on the inside as Governor Mark Carney and his staff try to revive the UK economy. With unprecedented access to all levels of its dedicated workforce, the series reveals how the Bank’s decisions impact all our lives.

2018 is a pivotal year to film within the Bank of England, with economic growth grinding to a halt and Brexit on the horizon this most vital of British institutions must steer the UK through a period of financial uncertainty.

This series demystifies central banking, telling the story of our economy through the people who work tirelessly to keep it on track; the powerful departments who ensure our high street banks don’t take unnecessary risks with our money; the research agents dispatched across the UK to gauge business and public confidence; the hugely influential committee whose decisions affect the interest rates we pay on our mortgages. From gold and banknotes to the incredible architecture of the fortress-like Threadneedle Street building, this series promises a timely look at the one of the world’s leading central banks.

Inside The Bank Of England (w/t) (2×60’) was commissioned by Patrick Holland, Controller, BBC Two and Tom McDonald, Head of Commissioning, Natural History and Specialist Factual. The BBC Commissioning Editor is Fatima Salaria, it is made by Raw and the Executive Producers are Liesel Evans and Rebecca North. The Series Director is Rob McCabe.

Gun No.6 (main image) tells the story of each crime carried out using Britain’s most deadly, illegal gun. Over one decade this gun has been used in 11 shootings, with three people murdered and at least four injured. But the gun is still out there.

Reviewing ballistic forensic data from multiple shootings in the early 2000s, West Midlands Police made a list of the 10 most wanted guns which were being used most frequently in crimes. One gun above all became the most active: Gun No.6. Using the unique markings left on every bullet the gun fires, the police have tracked a ghost trail of Gun No.6. Just like a fingerprint, a bullet casing can be paired to a specific weapon. Following this forensic trail the film moves from the inner city streets of Birmingham, to the leafy suburbs and back again.

A hybrid of documentary and reconstruction, this film explores the shockwaves that follow each of the 11 shootings. At a time when governments and the media are wrestling with the realities of violent crime, it’s never been more pressing to understand why people resort to the casual use of lethal weapons on Britain’s streets. Gun No.6 uses testimony from loved ones left behind, and from the police, to explore the consequences of gun crime for the victims, their families and the community. It also offers a window into the world of former-perpetrators of gun crime, exploring the reasons young men pick up and use firearms.

The families and loved ones of those killed speak with unflinching honesty; the parents, partners and children left behind are trying to make sense of the violence. Why would anyone pick up a gun and use it?

And to try and understand a world where young men choose to pick-up illegal guns, Bafta nominated director James Newton assembles a group of five ex-offenders, all unconnected to Gun No.6, but who have served time for serious firearms offences and have turned their lives around since leaving prison. They take on the role of gunmen and victims and re-enact the 11 shootings of Gun No.6, based on the limited information in police records, as a way of asking them to revisit their own experiences, choices and actions.

Gun No.6 (1×70′) was commissioned by Patrick Holland, Controller, BBC Two and Clare Sillery, Head of Commissioning, Documentaries. It is made by The Garden Productions Ltd. The Executive Producer is Zac Beattie, the Director is James Newton. and the Producer is Georgina Cammalleri.

Finding Dad (w/t) is a new documentary fronted by Mim Shaikh, which will be shown as part of the Big British Asian Summer.

Mim Shaikh is a polymath: actor, poet, radio broadcaster. His wit, charm and humour have built a huge following for his BBC Radio 1Xtra show and his previous BBC Asian Network show. His first feature film has premiered at SXSW to rave reviews and his YouTube channel goes from strength to strength.

Mim’s spoken word poetry pieces focus on issues such as fatherhood, diversity, social environments and mental health. His video Letter To My Mother attracted the attention of the Royal Family, who asked Mim to get involved in their Heads Together campaign.

But Mim’s life is missing one thing. In this affecting and revelatory one-hour film, Mim is going on a deeply personal journey to track down his father. It’s not just a significant story for Mim. This is a meeting agonised over by thousands of young people in the UK. One in ten fathers have no contact with their children – and for those who have no idea about their dad’s identity – wondering who their dad is, what he’s like and what life would be like if they knew him, can be a theme underscoring their entire lives.

Storyville: Under The Wire

Under The Wire is a powerful account of legendary Sunday Times war correspondent Marie Colvin and photographer Paul Conroy’s mission to Homs, Syria in February 2012. Their assignment was to cover the plight of trapped Syrian civilians under siege by their own government. Tragically, Colvin was killed when the international media centre was hit by Syrian Army artillery fire; despite being critically injured, Conroy had to find a way make it out alive.

Under The Wire, is directed by Chris Martin and produced by Tom Brisley, co-founder of Arrow Media. The film has been supported by History Films (in association with A&E IndieFilms), the British Film Institute with National Lottery funding and BBC Storyville.

7,000 miles from Silicon Valley in downtown Manila, a secret team of content moderators must delete a target of 25,000 Facebook, Google and Twitter posts each day. Trawling through the world’s most violent, disturbing and highly contentious online material in the form of terrorist videos, child pornography, self-harm material and political propaganda – ‘the cleaners’ are individually responsible for deciding what stays online and what gets removed. This film explores the hidden and complex world of digital content moderation – where undesirable material is ‘cleaned’ from the internet by a hidden army of nameless people.

The Cleaners raises important questions for all of us, who use these platforms daily without knowing what goes on behind the scenes: Who are these people that ‘clean up’ social media and what criteria do they operate by? Where does content moderation end and censorship begin? And what happens when their split-second decisions affect the lives of people in political hotspots like Myanmar or Istanbul?

The Cleaners is directed by Hans Block and Moritz Riesewieck, and Produced by Christian Beetz and Georg Tschurtschenthaler. The Executive Producers are Philippa Kowarsky, Julie Goldman and Christopher Clements. The BBC Storyville Commissioning Editor is Mandy Chang.