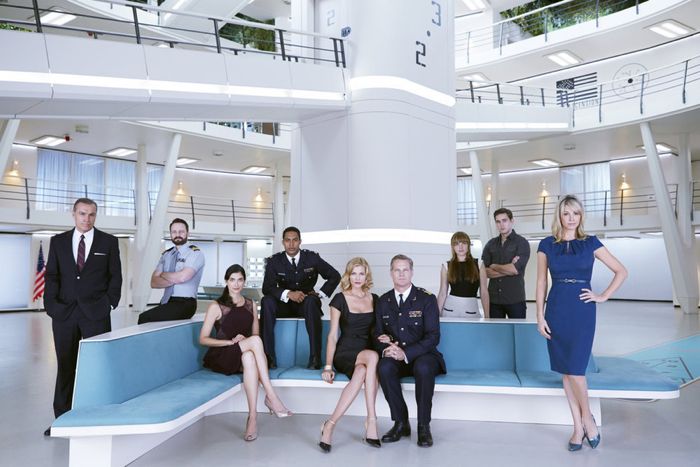 SyFy will soon present ASCENSION, a six-part miniseries that will air over three nights, and if the ratings are good enough, be picked up as a full-blown show, a la Battlestar Galactica. I’ve watched the first two parts, and while it is nowhere nearly as well written and acted as BG, it is an intriguing premise with some really gripping stakes.

The story begins with a murder, which is soon revealed to have taken place aboard the USS Ascension, a massive ship on its way to a new planet. See, in 1963 President Kennedy secretly ordered the launch of several hundred human begins into the unknown, set to colonize a new planet and ensure the survival of the human race. These people are nearly halfway through their mission, setting it approximately in the present day, and while it’s presented as a twist on the show, marketing materials have made it clear that’s what’s going on, so I don’t feel bad about spoiling it.

The ship is captained by William Denninger (Brian Van Holt, Cougar Town), who is coming to grips with the fact that he is the “middle captain,” who neither launched the ship nor will lead it to its final destination, so will likely not have a memorable legacy. His wife, Viondra (Tricia Helfer, Battlestar Galactcia) is a sneaky manipulator, who wields her own power, separate from her husband. These two are in charge of many things, sometimes benevolently, sometimes not so kindly.

The Ascension itself is interesting because it obviously has very advanced technology, as developed in the 1960s, meaning monitors are black and white and most control panels are knobs and lights, not interactive computers as we think of them today. I’m not sure that I buy that our country was capable of constructing such a thing in the 1960s, and the way the place is presented may not completely make sense.

If this has you wavering in your enjoyment, as it did me, stick through the first night and your patience will be rewarded. This would be a very different article if I was writing to viewers who’d seen the full two hours, and while it isn’t the best series on television, with many flaws, I am completely hooked and on board after night one. Trust me and watch. ASCENSION deserves a pick-up. That’s all I’ll say about that.

Oh, yeah, back to the murder, since that’s the driving story, even though I’m much more interested in the logistics of the ship itself. This small community has virtually no crime, and this is the first murder committed since the launch. That means there really isn’t a structure in place to investigate and punish the wrong-doer. Enter Oren Gault (Brandon P. Bell, Hollywood Heights), the noble executive officer who steps up to the task.

Rounding out the cast are: Dr. Juliet Bryce (Andrea Roth, Rescue Me), who isn’t getting along too well with her daughter, Nora (Jacqueline Byers, Blizzard), a strong-willed individual deeply affected by the murder; Chief Astronomer Emily Vanderhaus (Tiffany Lonsdale, G.I. Joe: Retaliation), the elder sister of the victim; Chief Safety Officer Duke Vanderhaus (Ryan Robbins, Falling Skies), Emily’s husband, who doesn’t like that Gault is heading up the case; James Toback (P.J. Boudousque, Coldwater), a maintenance worker and love interest for Nora; and Harris Enzmann (Gil Bellows, Ally McBeal), the son of the man who headed up the Ascension mission, who is back on Earth.

Yep, we get to see what’s happening on our own planet, too. What does Harris know? What will he do with that knowledge? This is another subplot that draws me in.

My biggest complaint that I currently have about ASCENSION is, where are the old people? The ship launched fifty years ago, roughly, so there should be lots of senior citizens on board who made up the original crew. We don’t glimpse this, with the focus on those who weren’t born yet when the mission started. This is a nagging query not addressed in these two hours that has to be satisfactorily explained for the series to be any good.

There are weaknesses in ASCENSION. I feel like some of the actors are woefully miscast. For example, I adore Brian Van Holt on the sitcom he’s been starring in, but his take on Captain Denninger doesn’t have the weight it should, at least in my opinion. Some of the happenstances are a little hokey and formulaic, and far too many people are cheating on their significant others. But there is a very strong mythology here that could override those problems, and given the nature of the show, the beginning cast doesn’t necessarily need to stay front and center over multiple seasons. The best parts of the miniseries beg for further exploration, and that’s why I ask you to please tune in, at least for the entire first night, and then make your decision about whether or not to continue watching.