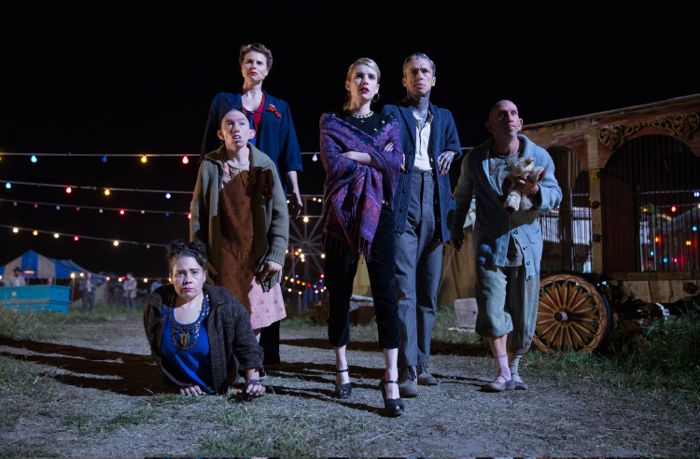 For a short, little while during this episode I was actually naive enough to think that someone might get some happiness. Dot’s heartfelt speech to Jimmy was so touching that I figured it would surely work. All along, Dot has wanted to be separated from Bette so she could live a normal life and find love. Then Bette said that they didn’t need to be separated and she was willing to be with a man she didn’t love so that Dot could have the life she wanted. The whole scene was beautiful.

Too bad it didn’t work.

I’m sure that Jimmy’s love is not Ima. She’s a sweet girl and all, but I agreed with Maggie’s assessment when she said that Jimmy was just hurting and would have screwed anything at that point. He felt so dejected and low that the last person he wanted to be with was the one person he loved: Maggie. The sad thing is I believe that it was Dot’s kind and loving words that made Jimmy realize what he was doing wrong and that maybe, just maybe, he was worth being loved. But of course before he could go find his true love, he was framed for murder.

That sneaky, sneaky Dandy. I keep waiting for him to get his come-uppance, but it looks like he’s going to have some more time to feel like a god before getting cut down. Every week he loses more charm for me and I’m sure I will be cheering when he finally is taken out. It’s probably for the best that he keeps thinking he’s a god for the moment though. It will make the look on his face that much sweeter when it all comes tumbling down. I don’t know how he’ll die, but I’m betting it’s going to be very bloody.

Now that Dot has been turned down by Jimmy, I have to wonder what they will do next. I doubt they will seek separation surgery any longer, but there is another frightening option. Bette was pretty enamored with Dandy when they lived with him. I wonder if she’ll want to return to him. Will Dot be willing to do for Bette what Bette was willing to do for her? Of course it’s an awful idea because he’s a serial killer and all. But seeing as they don’t know that, it’s possible that they could end up back at his place. It’s a prospect that has me picturing them as another sick puppet, strung up next to the monstrosity Dandy made from his mother and the Avon lady.

Hey, stranger things have happened on this show.

Know as soon as the Avon lady called that she would be in trouble.

Jimmy: “Eat up, girl. If you want it long and hard, I need you soft and wide.”

Dandy: “There’s nothing worse than an alcoholic with bad hygiene.”

Finding out how a housewife got a new stove in the ’60s.

Hm, let’s see. Dandy plus ladies at a Tupperware party, plus the title of this episode. What could possibly go wrong?

Dandy asking Regina to take a bath with him, like when they were little.

Bette telling Dot that she’d give up her life so that Dot could have one. That whole scene was so sweet.

Dell: “You’re a freak.”
Spalding: “You should see it when it’s angry.”

Spalding training his whore to act like a doctor.

The cop wisely pulling his gun the closer Dandy got to him.

Okay, I’ve heard of dirty cops but HOLY CRAP. I was so not expecting that detective to shoot Regina that fast.

Dot: “Let me take your pain away. Replace it with love.”

What did you think of this episode of American Horror Story: Freak Show? Which moment shocked you the most?