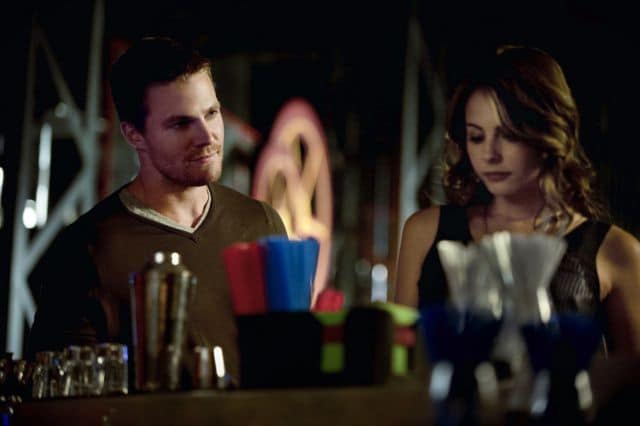 After a heck of a cliffhanger, which left fans anxiously on edge all summer, the CW’s ARROW returns tonight with ”City of Heroes.” It’s been months since half of The Glades was leveled, and the city desperately needs new leadership, especially with a couple of its top CEOs dead or behind bars. Sadly, Oliver (Stephen Amell) and The Hood have been MIA, and no one knows where to find them.

As “City of Heroes” begins, one may be forgiven for thinking it’s a flashback, which are so typical in ARROW, and do occur in this hour. However, Oliver’s first scenes on the island are not in the past, but in the present. It makes sense for Oliver to retreat back to the place he was marooned, as that is where he last had purpose and motivation, away from the life he didn’t quite adapt back into. Losing Tommy and failing to stop the bomb, Oliver has a lot of guilt, and doesn’t have it in him to continue at this moment.

Every hero needs a support team if they are to get through these trying times, which inevitably occur. Oliver has Felicity (Emily Bett Rickards) and Diggle (David Ramsey), probably the only two people capable and willing to track him down and try to convince him to get back on the job. Their mission is not easy.

“City of Heroes” is a personal crisis point for Oliver. It takes a lot to convince him to come home, and his reasons for doing so have nothing to do with The Hood. The mission of The Hood, crossing names off his father’s list and stopping corruption, has failed. The Undertaking has come and gone. This chapter is over, and considering Oliver put everything of himself into it, he’s lost without it. Now, he wants to build a new Oliver Queen that doesn’t skulk about at night.

But that doesn’t mean The Hood isn’t still needed. Four hooded vigilantes have risen to take his place, and their methods and missions are not the same as the ones Oliver undertook, in a bad way. Not to mention, his family’s company is in danger of being taken over and destroyed by Isabel Rochev (Summer Glau, Serenity), his friends need his support, his mother, Moria (Susanna Thompson), is facing trial for her role in The Undertaking, and things in general just suck in the hometown.

If season one of ARROW was a personal revenge story, season two moves the titular character into the superhero realm, beginning to build him into a more recognizable crusader. I liked the first arcs, but they were limited in scope, and certainly not always in keeping with what most people are looking for in a protector. Now, the series is allowing Oliver to grow. He can’t be The Hood any longer, but he can become something else. ARROW was always an origin story; now we’re moving past origin and into the meat of the tale.

Honestly, it is pretty brave to extend the origin over the course of an entire year, and it’s not over yet. “City of Heroes” is still getting through Oliver’s original tenure on the island, and while I look forward to moving past that time, as honestly those sequences drag the episodes down, it’s also exciting that, unlike Smallville, ARROW won’t only be building its lead up to the precipice of greatness. After ten years, Smallville felt plodding, not getting to the parts of Superman’s legend that we really wanted to see, Superman himself. ARROW seems poised to make it to the Green Arrow sooner, perhaps even in the next few weeks, rather than later.

One element that ARROW does really well is build family dynamics. Olivier’s relationship with Moira is different than his sister, Thea’s (Willa Holland), relationship with her. And the bond between Oliver and Thea, while strong, isn’t always top priority for either of them. There’s also Walter Steele (Colin Salmon) to keep in mind, who, while getting divorced from Moira, still cares about her kids. He plays a surprising and satisfying part in this premiere.

The supporting characters are defined enough that the entire hour doesn’t have to fall on Oliver’s shoulders, even if he is the most important character. Thea has moved on professionally and personally, both involving Roy Harper (Colton Haynes), in Oliver’s absence. Laurel (Katie Cassidy) is handling herself just fine, and we see how fine pretty early on. Quentin Lance (Paul Blackthorne) has the biggest challenges to work past, facing consequences for his past actions. These threads continue with or without Oliver.

In short, ARROW is a complex series that features characters who develop and change based on circumstance, and stories that move with them, not always a given on television. It’s well-written, nicely acted, and highly entertaining. “City of Heroes” has a lot to offer, and will certainly please those who wondered how ARROW could move past the big climax last year. I think season two should be just as good as the first, while in some ways being completely different.

ARROW premieres tonight at 8 p.m. ET on the CW.