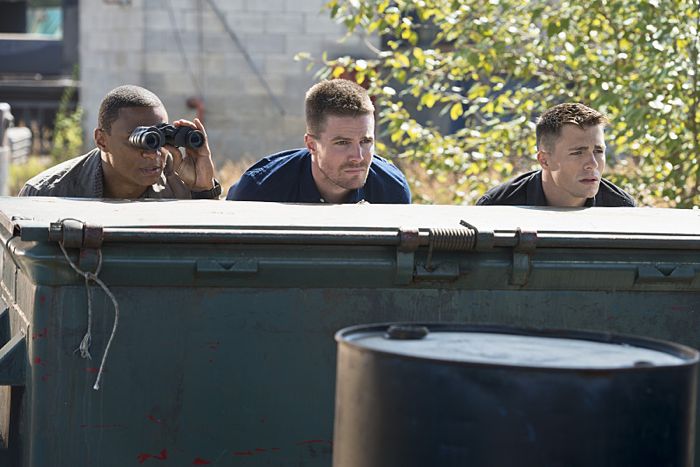 In a move that feels overdue for the CW’s ARROW, even though it is only three episodes into its junior season, Oliver (Stephen Amell) travels to “Corto Maltese” to bring Thea (Willa Holland) home. Of course, a few other things happen, but the hour is mercifully free of Oliver’s flashbacks, instead just giving us a few glimpses of Thea over the past few months, and it’s a pretty solid hour, especially in terms of character focus.

Oliver and Thea’s relationship is broken because of all of the secrets Oliver keeps from her. He considers coming clean in “Corto Maltese,” but instead, gives her just a taste of the horrors of the time he spent missing, using that as a way to assure her he’s staying silent for her own good. This may be wise, as Diggle (David Ramsey) points out Thea would feel incredibly betrayed all over again if Oliver admitted to being the Arrow these past two years. But it seems to forestall the inevitable. Thea ran away this time when she was kept in the dark. What will she do the next time?

It is true that Oliver needs Thea, but one issue not raised in this episode is how revealing his secret might endanger Thea. In truth, she is in danger anyway, should any villain discover the man behind the mask. But Oliver wouldn’t want her on Team Arrow, right, constantly putting herself in danger?

Someone that could benefit from the support of the team is Laurel (Katie Cassidy). Oliver turns her away because he doesn’t want her to get hurt, but he clearly doesn’t see the determination in her eyes. Laurel is angry at her sister’s death and one hundred percent committed to avenging it, whatever that takes. She isn’t even tempted by alcohol anymore, so focused is she on her singular goal these days. Thus, after Oliver won’t help her, she turns to Ted Grant (J.R. Ramirez, Power) for training. Now, Oliver will have no say over Laurel’s fate, which he could come to regret, even if he tries to keep her away from this life for her own good.

Diggle remains on Team Arrow, which is sort of odd because Oliver is giving up the hunt for Sara’s killer, the reason Diggle rejoined. I guess this can be explained because Diggle doesn’t really think Oliver is done with the search, and he wants to be there when the murderer is found. My guess is, given who shows up at the end of “Corto Maltese,” our heroes will begin their investigation anew next week.

Felicity (Emily Bett Rickards) might not be available to help them, though. She has a new job, a good job with her own executive assistant, working for Ray Palmer (Brandon Routh). He even allows her time off, just after she starts, to hop over to The Flash spin-off to visit her now-out-of-a-coma friend. True, this week she keeps putting her job on hold to help her friends, but if Ray keeps treating her this well, making her feel appreciated, how long before she shifts her efforts to someone who rewards her for them? Ray is no Oliver, who blows her off for justifiable, but dumb, reasons.

This, of course, raises the question of Ray’s motivations. Sadly, “Corto Maltese” gives us no hint of those.

We do know Roy’s (Colton Haynes) reasons for accompanying Oliver and Diggle on their trip. He wants to see Thea again and apologize, as well as tell her that he just wants her to be happy. Roy is never bad to Thea, not really, but this side of him, caring and sweet, is a step forward. This is a man worthy of Thea, and because of that, viewers can renew their hope for the couple to reconcile, something that looked like it would never happen at the end of last season. Someone has to be happy, right?

Finally, we have Malcolm Merlyn (John Barrowman). Is he still evil? He’ll surely be following everyone back to the States, given that he’s now a main character on ARROW. He has formed a trusting bond with his daughter, Thea, albeit through brutal means. Does he really care for her? Does he want her to be his disciple in crime? Will he try to use her to execute some nefarious plot?

ARROW is doing a fine job this season setting up things to come and charting new paths for all of its players. “Corto Maltese” continues that trend.