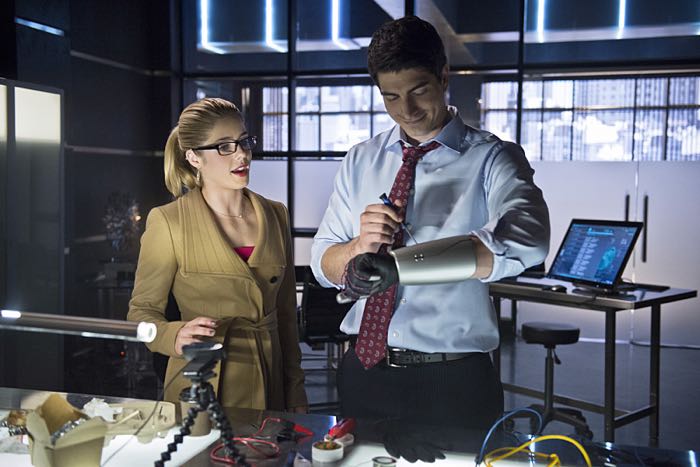 The CW’s ARROW comes back from a nail-biting cliffhanger this week with “Left Behind.” Several days after Oliver’s (Stephen Amell) deadly battle, his team has heard nothing of his fate and struggle to accept the possibility he might not be coming back. They valiantly try to continue the good fight in his name, but they may not be up to the task without their leader.

Oliver is the glue that holds Team Arrow together. Personally, I think it would be really cool for ARROW to kill off Oliver, something that happens in comic books, an alter ego dying and another picking up the mantle, but I don’t believe has ever happened to a central superhero on a television series. Yes, Black Canary is killed and replaced, but not being a main or titular character, it’s not the same thing. It’s not that I don’t like Amell or Oliver; it would just be a very bold, unexpected move that would signal to the viewers that this series means business.

Instead, because Oliver is made to be the glue, things cannot function without him. Felicity (Emily Bett Rickards), once she stops denying the most likely scenario, quits the team, and tells Ray (Brandon Routh) that she won’t be helping him fight crime, either. Diggle (David Ramsey) tries to wear the green hood, but he is not that skilled with a bow and finds it easier to return to his plain clothes and gun. Roy (Colton Hayes) is the only one that seems to be doing well, but he can’t go it alone.

An answer to Team Arrow’s problem could be Laurel (Katie Cassidy), who dons the Black Canary outfit for the first time at the end of “Left Behind.” She has a strong enough personality to be a leader, though there’s no guarantee the existing members would take orders from a semi-outsider. Plus, she’s been acting a little reckless, so she may not make the best decisions for them.

So Team Arrow is left in a holding, or disintegrating, pattern until Oliver can return. He’s alive, of course, Malcolm Merlyn’s (John Barrowman) evidence to the contrary, though Malcolm can be forgiven for believing as he does. Maseo (Karl Yune) rescues Oliver from the cliff because, as we see in flashback, Oliver risks his neck to save Maseo’s wife, Tatsu (Rila Fukushima). Thus, it will only be a matter of time, and perhaps some physical therapy, before Oliver resumes his role as protector of the city.

That time can’t come soon enough. The bad guy in “Left Behind” is Brick (Vinnie Jones), a returning foe who is able to gain the upper hand here. He isn’t someone to be trifled with, and now that he knows the heroes are vulnerable, he’ll probably be breaking quite a few more laws than previously. If he is to be stopped, either Team Arrow needs to pull itself together or Oliver needs to get back on the job.

Thea (Willa Holland) doesn’t know that Oliver is dead, but since he’s really still alive, I guess that doesn’t put her at a disadvantage. She’s worried because she hasn’t heard from him, but despite the fact that she’s the one who sends Malcolm to investigate in the first place, Malcolm doesn’t share what he finds with her. So Thea still doesn’t know Oliver is The Arrow or that he went into a fight to the death on her behalf.

What is Malcolm’s game? Why doesn’t he tell Thea the truth about Oliver? Is he worried that the truth will make Thea think more highly of her brother, thus bleeding away some of the influence Malcolm has over her? Or does he want to draw out Thea’s distress so she comes to rely more on him as a shoulder to cry on? And is he sincere about wanting to be a father, or does he have some dark purpose for Thea?

These questions and more will surely be answered in upcoming installments of ARROW. If there’s one thing you can say about the show, it’s not boring (except some of the flashback parts). It’s also usually well crafted, with mysteries eventually being solved and elements playing into one another. If it were a little bolder, it would be nearly perfect.